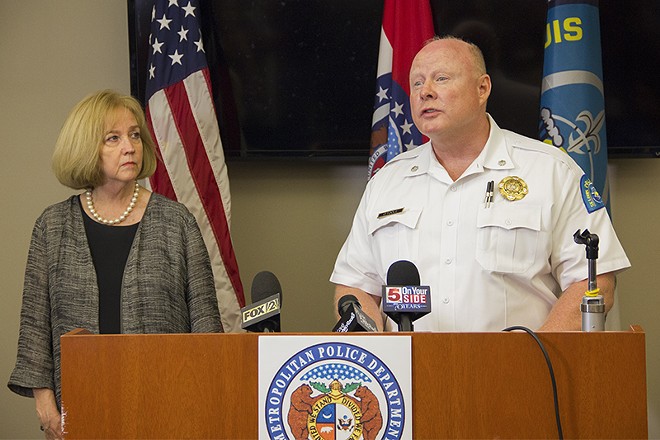 In a joint statement released Wednesday, the mayor and chief promised "an objective, thorough and fair investigation of all complaints and lawsuits stemming from the St. Louis City Police Department's response to the demonstrations and civil disobedience over the past week and a half."

Protesters have held daily demonstrations since September 15, when former St. Louis cop Jason Stockley was found not guilty of murdering Anthony Lamar Smith after a car chase in 2011. Within hours of the verdict, officers pepper sprayed and arrested protesters who refused to move out of the way of a police bus near the courthouse.

Police arrested 123 people two nights later, the majority of them in a mass arrest downtown. People, some of whom weren't even protesting, say police surrounded them — a technique called "kettling" — and then brutally attacked them, pepper spraying and kicking people as they surrendered.

The ACLU has filed a class action lawsuit against the city, and a husband-and-wife documentary film crew caught in the kettle announced this morning that they also were suing. The husband, Drew Burbridge, says he was knocked unconscious and woke to a police officer pulling his head up from the ground by his hair in order to pepper spray him directly in the face.

ACLU of Missouri Legal Director Tony Rothert called the request for an outside investigation "a step in the right direction" given the evidence they had seen.

“In a robust democracy, we must always protect the Constitutional rights of those observing, recording or participating in protest activity,” Rothert said in a prepared statement.

The police department's Internal Affairs Division had received a dozen complaints in response to the protests as of this morning, according to the city.

"These are troubling and difficult allegations, and it is important to determine if they are merited and, if so, what policy, training, or discipline issues need to be addressed," Krewson and O'Toole's statement says.

The chief had defended his officers earlier in the day during an interview with KMOX host Charlie Brennan. He disputed claims that officers gave people no exit route before swooping in for arrests, saying, "All these things are going to come out in the investigation."

Krewson and O'Toole said the city's investigation of complaints would include Internal Affairs and the Civilian Oversight Board as well as an "independent third-party investigation."

"It is important that the public have confidence in the results of this process, therefore Mayor Krewson and Chief O'Toole are calling on the U.S. Attorney for an independent third party investigation of the conduct, allegations and lawsuits," the statement says.

The Riverfront Times has asked the U.S. Attorney's Office for comment. We'll update this story if we hear back.

There is currently a vacancy in the U.S. Attorney's Office here, which is part of the U.S. Department of Justice. The acting U.S. Attorney, Caroline A. Constantin, was given the position in March 2017 after President Donald Trump asked Obama appointees to resign.

Trump has nominated a former FBI agent, Husch Blackwell attorney Jeffrey B. Jensen, to fill the vacancy, but he needs confirmation from the U.S. Senate.

People can still file complaints with Internal Affairs and the Civilian Oversight Board, the mayor and chief say.

Even as they announced plans for the investigation, they added their support for police officers who "have worked thousands of extra hours in high tension situations to ensure that demonstrators can march safely in our streets and to protect people and property from those who intend destruction and harm."

Krewson added, "I thank and respect our officers for their service and dedication."