Filmmaker at Protest Was Beaten by St. Louis Cops After 'Kettling,' Suit Alleges 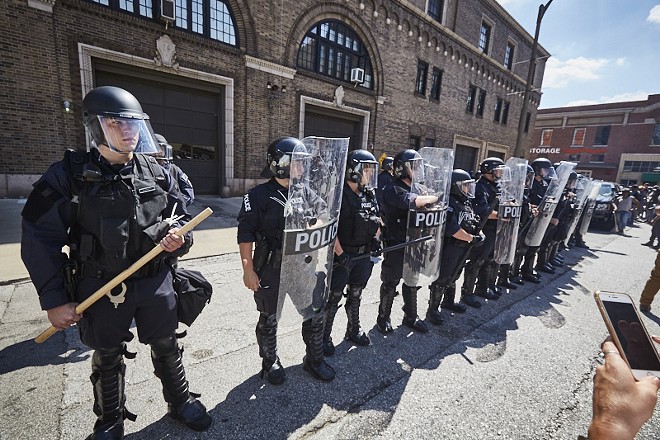 Drew and Jennifer Burbridge, a married pair of documentary filmmakers, are suing the city of St. Louis after they were caught up by police sweeping protests downtown on September 17, sprayed with chemicals, beaten and arrested.

A total of 123 people were arrested that night, all but three on charges of failure to disperse. Many have alleged that they were not given a way to leave the scene as police boxed them in using a tactic called "kettling," and then rounded them up indiscriminately. Others arrested that night include St. Louis Post-Dispatch reporter Mike Faulk.

The Kansas City residents also say they were in downtown St. Louis not as participants in the protest, but as "neutral third party observers and journalists." Carrying their professional camera equipment, they arrived at Tucker and Washington around 11:05 p.m. Police made no move to prevent them or discourage their presence.

began banging batons on their riot shields and encircled the assembly. The assembled protestors, bystanders and media were encircled and not provided a means of egress. This is a law enforcement tactic known as “kettling.”

At no time prior to the police actions described immediately above did the Burbridges hear instructions to disperse or leave the assembly.

Without further instruction or warning, police officers surrounded protestors, observers, and members of the press, cutting off all routes of egress—including via any sidewalk—and prohibiting the people trapped inside from leaving.

Drew Burbridge told an officer that he and his wife were observers, not protesters, and asked if they could leave. His request was ignored. Instead, police indiscriminately sprayed those in the kettle with chemicals, the suit alleges.

Drew Burbridge alleges that he was then hit with spray a second time. The suit alleges he was sitting cross-legged on the ground with his wife when a police officer said "that's him" — and grabbed him, dragged him away from his wife, and hit him with pepper spray in his eyes and mouth.

Then, he alleges, they threw him to the pavement, twisted his arms behind his back, and kicked him, even though he was not resisting in any way. Three officers then beat him with their hands, feet and batons. “Do you want to take my picture now motherfucker? Do you want me to pose for you?” one officer cried. Burbridge was beaten so badly he lost consciousness — and woke up to being sprayed yet again.

He was jailed more than twenty hours and charged with failure to disperse. 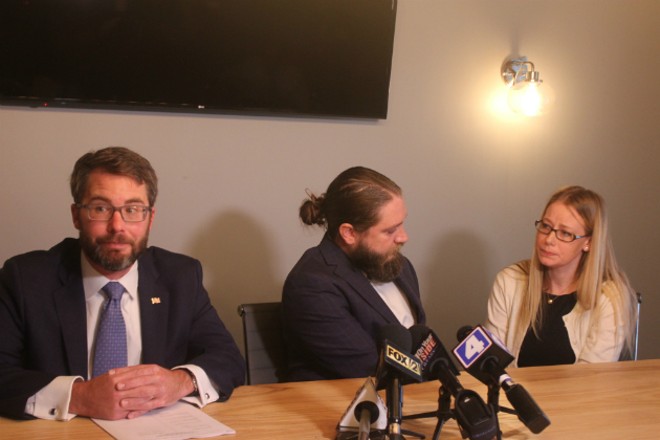 As for Jennifer Burbridge, the suit alleges she was taken from her husband and taunted by officers, who crowed, "Look who I have" — an apparent reference to her role as a journalist. After she saw her husband being beaten, the officers told her, “Did you like that? Come back tomorrow and we can do this again.” Another added, “What did you think was going to happen?”

She too was jailed twenty hours and then charged with failure to disperse.

At a press conference with Newton, Drew Burbridge says he's filmed around the world, but the treatment by police in St. Louis was unlike any other experience.

Staff writer Doyle Murphy contributed to this report. We updated the story after publishing with a photo and new details from the Burbridges' press conference.