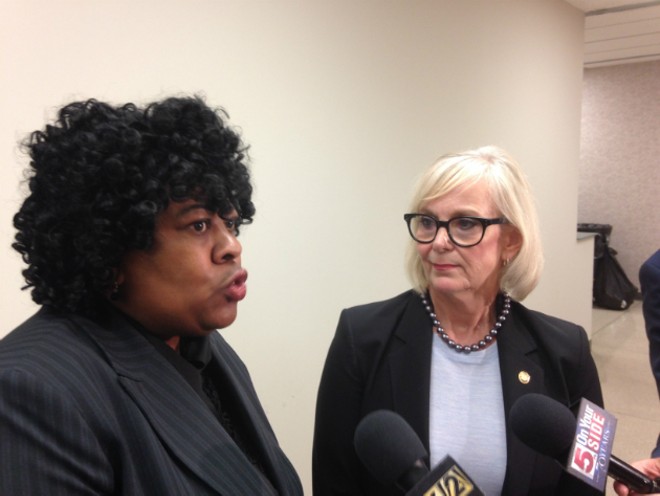 Witnesses to Saturday's mass arrests at the St. Louis Galleria described a frightening scene for St. Louis County Council members — a series of 28 three-minute pleas for a council response.

Mothers told of huddling with their kids as county and Richmond Heights cops stormed into the crowd of protesters, tackling people to the floor of the suburban mall. Elderly marchers said they heard police give muffled, garbled orders to disperse through a bullhorn and then watched in horror, realizing few people in the crowd had heard or understood what was about to happen.

"There is a difference between law and order and justice," said Aidan O'Brien, who was shown on a cell phone video being dragged to the ground by two officers during her arrest. "There is right and wrong."

The 22-year-old was among a crowd of more than 150 people who entered the mall around noon and marched in protest of police abuse. It was the ninth day of demonstrations since former St. Louis cop Jason Stockley was acquitted of first-degree murder in the 2011 killing of Anthony Lamar Smith, and protesters were targeting the commercial hub while chanting "No justice, no profits!"

Police say mall management asked them to clear the shopping center after someone threw a trash can and protesters blocked escalators. Officers gave three orders to disperse, and then arrested 22 people, according to police.

State Representative Stacey Newman (D-St. Louis County) and the Rev. Cassandra Gould on Tuesday asked the council to commission an independent investigation of both the police response in the mall and the subsequent delays that kept some people in jail for more than 24 hours even while preventing access to lawyers and family members bearing medication.

Thirty people signed up to speak Tuesday night at the council's regular meeting, and 28 used the three minutes allotted to each person to talk about what happened at the Galleria. Newman and Gould say the many issues raised by eye witnesses deserve to be reviewed by an experience investigator.

"We have too many questions," Newman said.

She and Gould sent the council a letter signed by ten lawmakers, including U.S. Representative Lacy Clay (D-St. Louis), and ten clergy members. It asks the council to appoint an investigator from outside the county government to conduct the inquiry. They suggested using a retired Circuit Court judge from the city.

The county's Board of Police Commissioners has the power to investigate complaints against officers, but several speakers said they don't see the board as independent. Gould said it would be like asking police to supervise themselves.

"When your children are underage, you don't leave them home under their own guidance," she told reporters after the meeting.

Police Chief Jon Belmar released a statement after the arrests saying officers have used "an incredible amount of discretion" during the protests.

"Citizens have been allowed to exercise their First Amendment Rights," he added. "However, when those protests descend into criminal activity, law enforcement has no other chose but to intervene."

Protesters who were there on Saturday and people who watched cell phone videos of the chaotic arrests say it was the officers who turned a peaceful demonstration into a violent mess. They described it as a "police riot," a term that goes back to the billy-club-swinging police filmed beating Vietnam protesters bloody during the 1968 Democratic Convention in Chicago.

This photo sequence indicates a woman inserting herself into an arrest in progress & is arrested herself at Galleria Mall today #STLVerdict pic.twitter.com/zBEYHaItZY

Speakers on Tuesday said they were horrified by a St. Louis Post-Dispatch photographer's pictures of police arresting the Rev. Dr. Karla Frye. A three-frame sequence shows the pastor trying to pull an officer off her thirteen-year-old grandson, who was being roughly arrested. Police quickly turned on her, and a Richmond Heights officer is shown grabbing the 56-year-old church elder by the throat as she was taken down.

Frye was charged with felony assault along with rioting and two counts resisting arrest. She was jailed overnight, and supporters say jail personnel wouldn't accept medicine for her on Saturday night because the Buzz Westfall Justice Center was on lockdown.

County Councilwoman Rochelle Walton Gray said she was one of the many elected officials and clergy members who called to ensure inmates were given their medications. She claimed she was given the impression that was going to happen, but learned later inmates didn't receive medications until the next day.

"Why were we ignored?" she asked.

Kristine Hendrix, an activist and member of the University City school board, projected the scene of Frye being arrested onto the wall of the council chambers. She said she has a son who is the same age as Frye's grandson. "And had a police officer put his hands on my child, I can't say I wouldn't have tried to defend him with all of my life."

The council took no action on the request for an independent investigation on Tuesday night.