Horses Would Be Banned from St. Louis Streets Under New Proposal 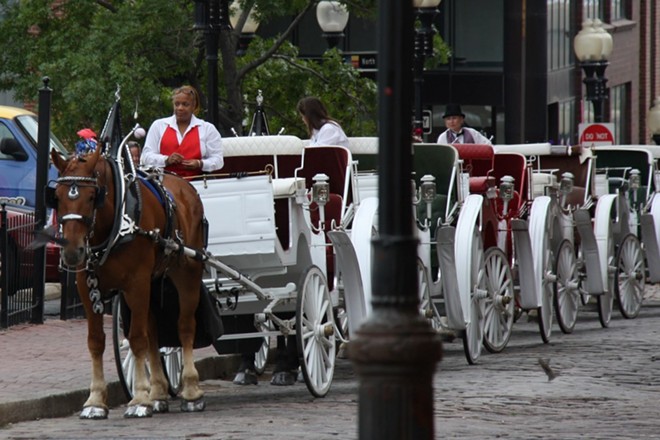 A new proposal at the Board of Aldermen could clear up confusion as to who regulates horse-drawn carriages in St. Louis — by almost entirely banning horses on city streets.

Board Bill 129, which is being sponsored by Alderman Joe Vaccaro of the city's 23rd ward, would prohibit people from riding, walking or otherwise leading horses on public streets. This ordinance has some major exceptions, though — it would not apply to mounted police, parades or public celebrations.

The bill was heard at a committee meeting this morning.
"It went well," Vaccaro says. "We're going to try and get more testimony next week from carriage owners. I'm going to send a letter personally inviting all the carriage companies, a letter to the health department. So we'll get a pretty diverse group."

The proposal was praised by Dan Kolde, an animal rights lawyer who has worked to protect carriage horses in St. Louis.

"We are very appreciative of the board for introducing legislation," Kolde says. "These carriages are problematic in cities across the U.S. and we appreciate our board stepping forward in a meaningful way."


The city had previously asserted that the Metropolitan Taxicab Commission, or MTC, was responsible for regulating vehicle-for-hire services in St. Louis City. However, when the commission attempted to take action against a carriage
operator, Brookdale Farms, the company sued — and a judge agreed that the MTC's charter does not permit it to regulate such companies.

While the litigation continues, the MTC effectively stopped regulating the carriages for six months.

"At this point, I don't think any of these carriage companies have any intention to obey regulations," Kolde says. "They haven't obeyed regulations in five years. I don't see why they would start. I don't know if the MTC has the desire, or even the resources to regulate this."