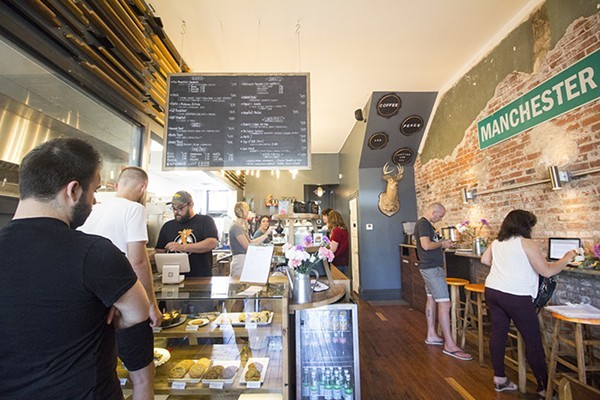 A group of St. Louis business owners has a few words for those involved in protesting the acquittal of former city police officer Jason Stockley: We're with you.

In a letter co-signed by 46 business owners and a host of other individuals, the group makes it clear exactly whose side they are on in the protests that have gripped the city, saying they stand in solidarity with Black Lives Matter and and the protesters as a whole. They write, "The damage that we have or potentially could sustain during these demonstrations is a small price to pay in the fight for justice."

The letter also takes aim at the police response to the protests.

"We see police escalating tensions on the streets and then denying responsibility for the results," they write. "We see our innocent patrons caught up, brutalized and arrested in the Central West End, Loop and downtown. When media is arrested for doing their jobs, how do we tell our staff they are safe doing theirs?

"It is not at all clear that police have our best interests at heart when they are preoccupied with macho attempts to 'own' the streets. Frankly, we have reason to wonder if we have more to fear from the police officers than from a small handful of vandals."

Those co-signing include owners of Left Bank Books, Handlebar, Rise Coffee House, Flowers & Weeds, MoKaBe's, STL-Style and Seed Sprout Spoon. Golden Grocer, which had a window broken during the protests in the Central West End on September 15, signed. So did Chris Sommers of Pi Pizzeria, who earlier issued a manifesto of his own after being targeted by the St. Louis County police union.

The letter is the work of Eliza Coriell, who owns the Crow's Nest in Maplewood. Coriell says she saw people commenting about the damage done to small businesses by the protests and others asking about how the small business community felt about the ongoing disruption. She decided to write about her perspective — and then, using social media, began to circulate the result on Friday.

She had to start again Saturday — the original website she was using to gather co-signers had some server issues, she says. But she started again, and rapidly found people willing to sign on. "I just put it on social media, and it took off from there," Coriell says.