Protest at Police Headquarters Calls for Resignation of Chief O'Toole

Protesters marching through downtown St. Louis this evening focused on a matter ripped from the headlines  — the treatment of black officers on the city's police force. Then they called for the resignation of Acting Police Chief Lawrence O'Toole.

The group originally assembled at Market and 16th streets at 6 p.m., with participants given blue tape to cover their mouths. Then state Representative Bruce Franks Jr. (D-St. Louis) announced that they would be marching to police headquarters to discuss two high-profile cases involving black officers.

The march was a silent one, with several hundred people following organizers in a long line through downtown streets. At the police headquarters, the protesters planned ten more minutes of silence — but after that, Franks warned, they would "turn it up." 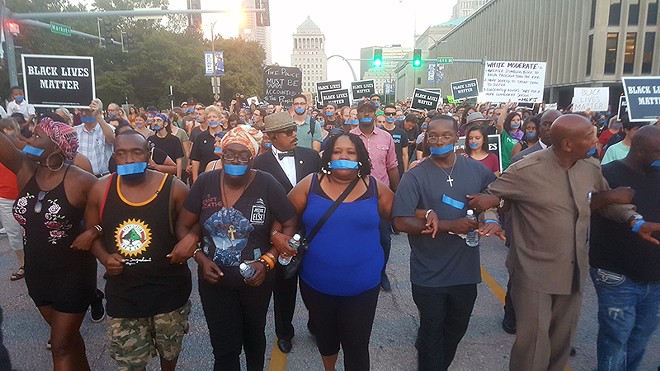 In introducing the theme, Franks reminded those assembled of two cases. First, in June, police responding to the scene of a stolen vehicle shot one of their own — an off-duty black officer who lived in the neighborhood and had responded to the commotion with his department-issued firearm, as KMOV reported at the time.

More recently, the Post-Dispatch reported this weekend that an undercover officer was "mistaken for a suspect believed to be carrying chemicals" and bloodied during the mass arrests downtown on September 17. Police allegedly knocked him down and hit him three times, then zip-tied his hands behind his back. Only later did they learn he was one of their own — an alarming fact that has now triggered an investigation by the city's public safety director.

The undercover officer is black.

"We have another officer, a black officer who was beaten by white officers, because they thought he was a protester," Franks told protesters. "So I'm supposed to believe you're going to protect me when you can't protect one of your own who looks like me? .... Blue silence is violence."

Franks said the incidents are indicative of the department's treatment of people who criticize them — their treatment of minorities is so out-of-control, they're even injuring their own.

"What they don't understand is they're going to get tired before we do," Franks warned.

Of the 22 arrests at the St. Louis Galleria this Saturday, Franks said, "What happened that night can't, and won't, happen again. You want to know why? You touch one —"

The crowd thundered back: "You touch all!"

Around 8 p.m., the protesters observed one minute of silence and got down on one knee. Upon rising, they changed "Kaepernick!" — a reference to the NFL player who touched off national controversy by "taking a knee" during the playing of the National Anthem.

After protesting at the police headquarters, the group went on the march again, heading southeast toward the evening's starting point.

Around 8:40 p.m., around 100 to 200 protesters marched up the I-64 on-ramp, heading toward the phalanx of cops with bicycles blocking the highway entrance.

"Whose bridge?" they chanted. "Our bridge!"

The protesters walked right up to the line of police, but a brief face-off ended without the police reacting or without confrontation. The cops held the line, but did not make a move on the protesters.

The protesters then backed up and rejoined the rest the group at 10th Street and Clark Avenue. They then marched toward Ballpark Village, where they arrived around 8:55 p.m.

"No justice, no baseball," they chanted.

At 9:15 p.m., organizers had everyone sit down. After some chants, they shared information about the funeral arrangements for Isaiah Hammett, who was killed by St. Louis police in June. Organizers expressed support for his mother, Gina Torres, who has "been out at protests every single day."

"I'm not gonna stop, I'm going to be here every single day until I get justice for my son and every single baby that they've killed," Torres cried.

At 9:35 p.m., the organizers asked everyone to give each other a round of applause — they noted that the group had suffered zero arrests. They then made plans to meet up again tomorrow at 6 p.m. at Kiener Plaza.

Editor's note: We have continued to update this post as the evening has continued.