Galleria Protesters Freed After More Than 24 Hours in Jail 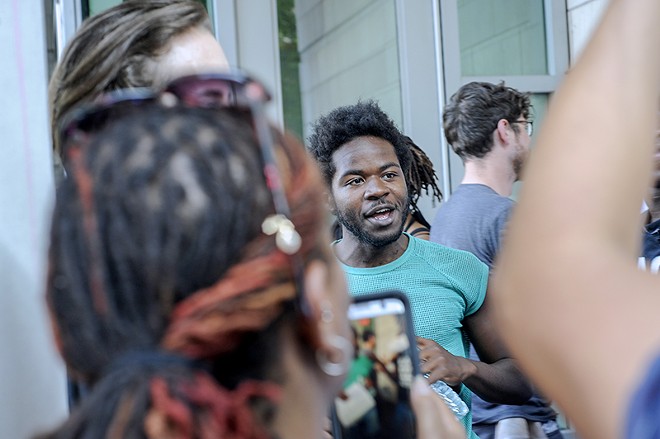 The last of nearly two dozen people arrested during a crackdown on protesters at the St. Louis Galleria was released from jail late Sunday afternoon to a cheering crowd.

"Who shuts shit down?" shouted 27-year-old Rodney Brown, leading more than 100 demonstrators in a favorite chant. "We shut shit down!"

It was a celebratory moment for protesters outside the Buzz Westfall Justice Center in Clayton after what had been a long night that continued through most of the day. Defense attorneys, including multiple lawyers from the nonprofit firm ArchCity Defenders, began working almost immediately to free the Galleria defendants who were taken into custody on Saturday at the Richmond Heights mall.

Protests have broken out in the area every day since September 15 when ex-St. Louis cop Jason Stockley was found not guilty of murder in the 2011 killing of Anthony Lamar Smith. 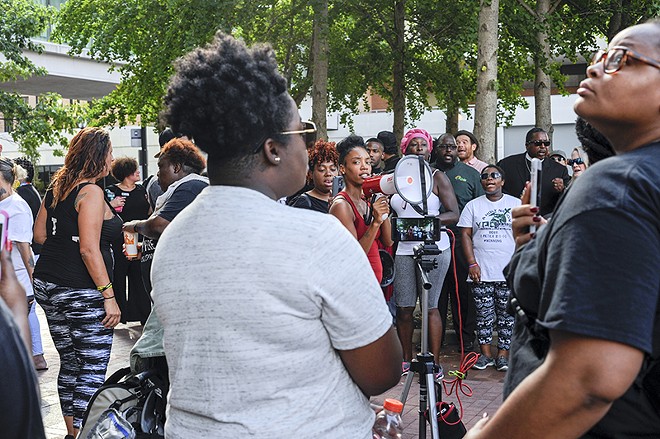 Richmond Heights and St. Louis County police officers swarmed protesters shortly after 1 p.m., videos show. Richmond Heights police say mall management called them, after an hour of peaceful demonstrations, when one protester threw a trash can and others blocked an escalator.

"This was not tolerated by mall management, and they wanted all protesters removed from the mall," according to a statement from Richmond Height's police.

Police say officers gave three warnings to disperse, although some protesters say they didn't hear them. County police said on Twitter that 150 protesters left peacefully, but a smaller group stayed behind. Videos from the scene show officers grappling with people young and old, slamming a number of them to the tile floor before binding their wrists with zip ties. A county officer suffered a back injury in the melee, according to police.

Defense attorneys arrived within two hours at the justice center only to find they couldn't get in with their bar cards because the facility had been locked down, handcuffs fastened across the door handles. Even friends and family members who tried to deliver medicine for people inside were turned away, lawyers say. The attorneys tried to reach the duty judge but were told that wouldn't be possible until Sunday morning, according to ArchCity.

Lawyers were finally allowed in the judge's chambers shortly before noon Sunday and spent the next several hours working for the release of those arrested. 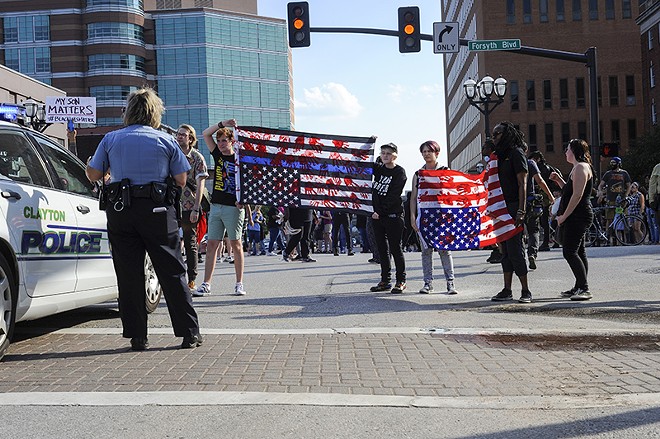 Thomas Harvey, executive director of ArchCity, says that attorneys were kept from clients and blocked when they tried to find out more about the mall protest.

"At every turn, our lawyers were met with delay, miscommunication and a general indifference to the rights of the people arrested and the attorneys who work with them," Harvey said in a prepared statement.

Several entities, including the National Lawyers Guild and Jail Support, raised bail for the defendants, who were slowly released throughout the day. Those arrested included the Rev. Dr. Karla Frye, who was charged with third-degree assault under a new "Blue Lives Matter" law after she came from behind and grabbed a cop who had pinned her thirteen-year-old grandson to the floor. Supporters were incensed by a St. Louis Post-Dispatch photo that showed a Richmond Heights officer with his hand around her throat during the arrest, although county police were quick to point to earlier shots that they say shows Frye assaulting an officer.

She was released to a hero's welcome on Sunday before supporters whisked her away. Another newly freed protester collapsed outside of the jail and was taken away in an ambulance. Organizers say he was manhandled during his arrest, and they worried he was suffering from a concussion. Police say injuries to protesters were limited minor scrapes.

Fifteen people were released without bond or charges, although they could still be charged in the future, ArchCity says. 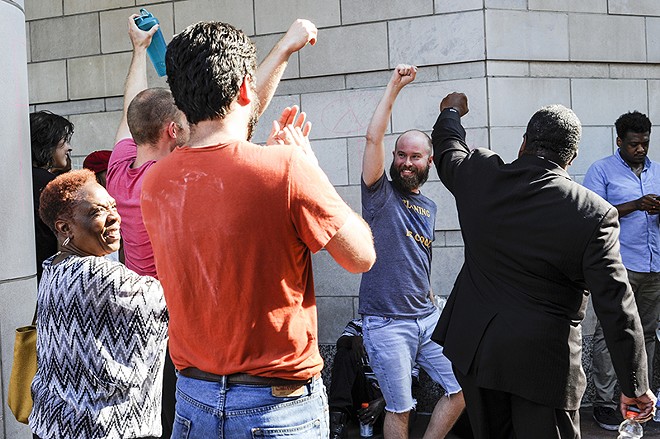 A number of those released declined to speak with reporters, citing possible court cases to come. Jeffrey Stack, 57, of Columbia, emerged from the justice center with a bandage covering a swollen gash above his left eye, a wound he says he suffered when a county officer slammed him to the tile.

"I wasn't intending to be arrested," Stack says. "I'm a non-violent activist."

Stack is the longtime coordinator of the Mid-Missouri Fellowship of Reconciliation, an interfaith organization that works for non-violent conflict resolution. The mall was the perfect place for the protest because of the out-sized importance that society places on commerce and the "indifference" of the wealthy to issues that disproportionately affect the poor, he says.

"This is where it hurts a society," he says. "They want to go ahead and pretend that it doesn't matter when an African American's life is taken, well, then there is going to be a response and shut it down, because all too often the economy is seen as the cathedral of our times. The well-to-do think they're insulated from this." 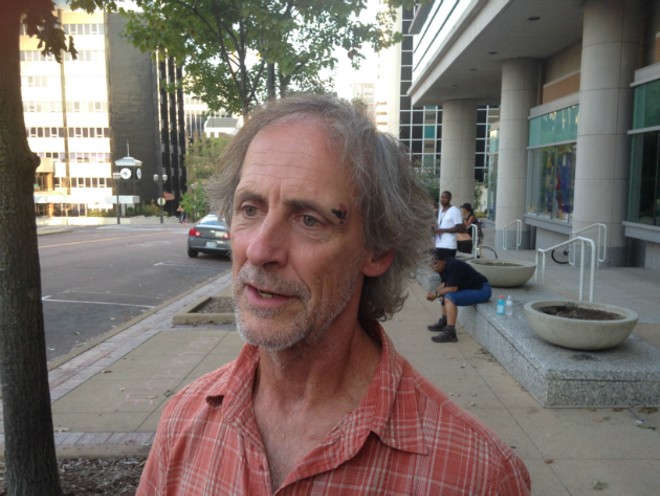 He says protesters had begun to leave after dispersal orders from police, but apparently not everyone left quickly enough. When the first arrests began, he says he lingered behind, hoping to ensure protesters weren't abused. But he ended up being arrested, too.

He was charged with resisting arrest and rioting — a charge that Attorney General Josh Hawley has recommended prosecutors use against protesters. Stack says he was guilty of neither and looks forward to returning in October for his first court appearance.

We welcome tips and feedback. Email the author at doyle.murphy@riverfronttimes.com or follow at @DoyleMurphy.