Alex Garcia, a father of five from Poplar Bluff, Missouri, is now considered a fugitive by U.S. Immigration and Customs Enforcement, or ICE. His wife and children (who are all U.S. citizens), multiple St. Louis nonprofits and some local churches are pushing for ICE to reconsider Garcia's case. Last Thursday, September 21, Garcia was supposed to report to the U.S. Citizenship and Immigration Services office in St. Louis for deportation. Instead, he is taking sanctuary at a church somewhere in the region — and his lawyer attempted to file an additional request for a stay of removal even as supporters rallied outside the Robert A. Young Federal Building. The new request included a petition with nearly 800 signatures.

"I think ICE agents, what it boils down to at a local level, have been given free range with the removal or the weakening of the priorities memo," John says. "The language that we're hearing from the president, from Attorney General Sessions and down, is that everyone is a target and we wholeheartedly reject that idea. That fails to honor our dignity as human beings and it fails to respect our shared values and that's why we're here and we hope ICE listens and does the right thing." Garcia left Honduras thirteen years ago. His first attempt to enter the U.S. ended with an order of removal from Border Patrol. His second attempt, however, was successful. He married his wife, Carlene Garcia, and the two now have five children together.

Garcia's marriage did not give him legal status — in part because the "order of removal" from his first crossing has proved a significant barrier. Nicole Cortés, co-director of the Migrant & Immigrant Community Action Project, has represented Garcia and his family for several years as he's worked to gain legal status. "Sometimes being married to a U.S. citizen gives an undocumented person path to citizenship or a path to legal permanent residence, a green card, but not in all cases," Cortés says. "So in Alex's case, he cannot receive legal status through a petition by his wife because of the old removal order that he was issued when he first attempted to cross."

In 2015, Garcia came onto ICE's radar when he was helping his sister with her first check-in with the immigration agency. Garcia petitioned for, and was granted, a stay of removal in both 2015 and 2016. But this year, ICE did not grant him a stay of removal. In a last-ditch effort to keep Garcia with his family, some St. Louis churches are offering him sanctuary. Three religious leaders attended the rally and stood in support of Garcia. They are not revealing his current location. Says Reverend Rebecca Turner from Christ Church in Maplewood, "We will, as a coalition, be revealing that location when the attention is not so high on the family. The most important thing is he is under the sanctuary of really our entire group and we'll be supporting him and his family until that time when everyone believes it's safe for us to make that announcement."  Father John O'Brien, pastor of Our Lady of Guadalupe Church, attended the rally as well. "Human dignity supersedes human law," O'Brien says. "If a certain structure, or system or law that's in place or accepted by a country is seen to be destructive — to the basis of civilization which is the family — then we have to speak up and say, 'Look, this has to change.'" The pastor of a Spanish-speaking parish, O'Brien says most of his parishioners are Spanish immigrants. "We live in a political reality," O'Brien says. "We live in a reality where we elect people to represent us, elect people to make our laws, to decide what's the best thing for this country, or a particular state or a particular territory. We are the human beings that influence that process and our faith and our recognition of justice and our humanity is an essential part of that. We can't separate that from the political process. So while I don't advocate for a particular candidate, I absolutely will advocate for issues of justice and morality that also happen to be political." Legally, ICE can still deport Garcia even if he is claiming sanctuary. However, the agency has traditionally been loathe to march into churches and order them to turn over any immigrants they are harboring. Agency policy discourages arrests at "sensitive places," which includes places of worship.

There has been a major increase in the number of churches offering sanctuary since Trump signed executive orders cracking down on immigration, Reuters reported. "Right now, there's about 22 public sanctuary cases across the country," John says. "We've seen sanctuary church declarations in the national movement. There were about 400 at the beginning of the year and now there's over 800. This is just an issue of moral urgency. This separation of families, or intense hunting of people in our communities just has to stop. There's just nothing else we can do. As people of faith and goodwill this is just what we have to do." The ICE office in St. Louis refused to review the additional request and would not take the packet of signatures from Cortés. They also declined to make someone from the St. Louis office available for interview. "Their gimmick today was that he is a fugitive," Cortés says. "I don't believe that that prevents them from accepting a stay and we're going to continue that legal fight in whatever way we can. But it was certainly abnormal for them to not even at least receive it and them make a decision on the merits." 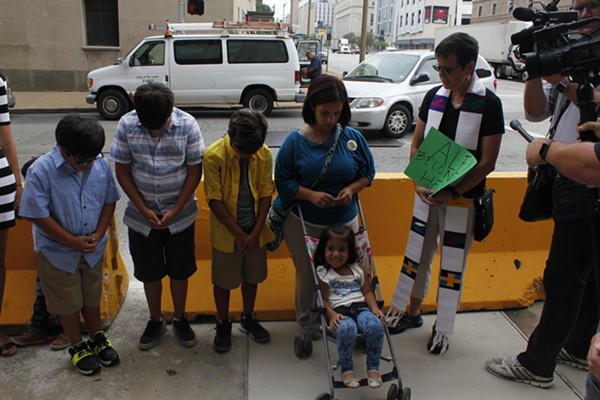 Cortés says she will continue to fight the legal battle.  She notes that the old removal order bars Garcia from seeking a green card until he's been outside the U.S. for a full ten years. That would be in effect if he is removed now, even though he's the father of five American citizens and married to another one. "They're looking at at least a ten-year separation if he is removed from the country," she says. The supporters marched from the Robert A. Young Federal Building to Thomas F. Eagleton Courthouse Thursday. Carlene Garcia was in tears as she pushed her youngest child in a stroller down Tucker Boulevard. She later addressed the group on the steps of the courthouse. "He deserves to be with his five children," Carlene Garcia says. "What they are doing to families like ours is not right. We are good people and he wants to be with us."