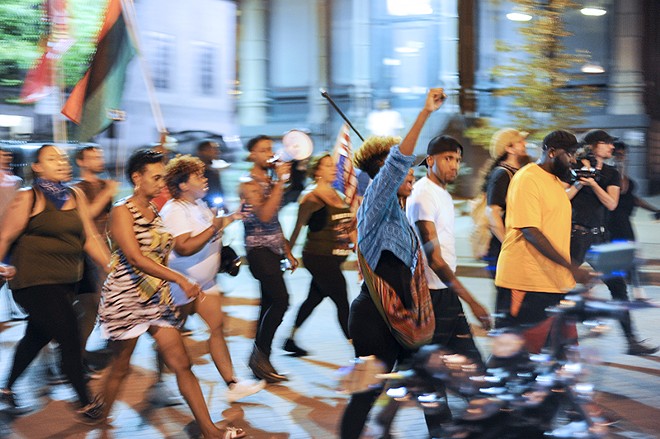 It's been one week since a judge found Stockley not guilty of first-degree murder in the 2011 killing of Anthony Lamar Smith. Demonstrations have swelled to thousands, at times swallowing downtown streets. In St. Charles, however, the demonstrators contended with jeers of "Blue Lives Matter!" and, frequently, "Go home!" 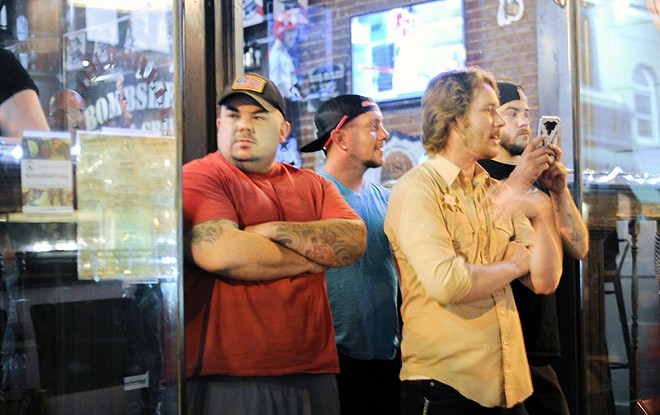 The night was filled with multiple near-altercations instigated by staggering, slurring pedestrians. Yet during the roughly two-hour protest, police targeted only two men for arrest, both of whom appeared to be more than a little hammered.

“We’re more worried about the drunks than anything else," a police commander on the scene told RFT, not long after this guy got taken down by three cops and had his head very literally shoved into the gutter. The man was not a protester.

Even before arriving in St. Charles around 8 p.m., protesters had already managed to shut down the St. Louis Outlet Mall in Hazelwood — with the mere threat of demonstration. Earlier on Friday, the mall had announced that it was closing three hours early, leaving the protesters to gather in a mostly empty stretch of parking lot at 6:30 p.m. But once assembled, organizers instructed them to get back into their cars and to form a long caravan. "Follow the car in front of you," they were told.

Hazard lights flashing, the long line of cars snaked its way to St. Charles. By 8:30, several hundred people had massed in front of Trailhead Brewing Company near Frontier Park, where the St. Charles Oktoberfest was already in full swing.

The protest carried down South Main Street, and at one point, a man driving a silver sedan tried to pass through the crowd. His car was halted by the alarmed protesters, and someone cracked the vehicle's windshield with a flag pole. The driver reversed, and he could be seen grasping the steering wheel with one hand and using the other to flip off the protesters shouting after him.

Over the next two hours, protesters blocked several of the quaint, brick-lined intersections along Main Street. At one point, they observed six minutes of silence, marking the roughly six years since then-officer Stockley shot Smith after a high speed chase through north city St. Louis.

Eventually, the crowd wound its way toward Oktoberfest. Now, the cries of "Anthony Lamar Smith!" and "Whose streets? Our Streets!" were being echoed in sight of the festival tents and colorful vendor booths located on the other side of the fence.

"Go to hell!" yelled a man wearing a cowboy hat, leaning over the fence and pointing emphatically. Referencing Stockley's account that he saw Smith making a drug deal — a baggie of heroin was discovered in Smith's car — the cowboy-hat wearing Oktoberfest attendee added, "He was a heroin dealer and tried to kill a cop."

Dozens of Oktoberfest attendees followed the protest crowd as it marched south on Riverside Drive, though none attempted to cross the fence. One or two people stuck out their hands for high fives and fist bumps. Two men even embraced, a rare moment of gentility in a night in which slurred racial slurs could be heard from bar patrons on the street. 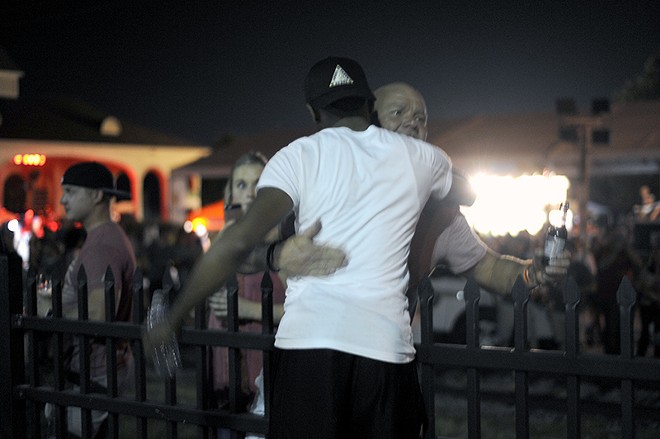 Later that night, a man in a light blue polo shirt took off at a slow jog through the protest group and tried to knock cameras from the hands of two photographers, including frequent RFT contributor Theo Welling. (Welling's camera was undamaged.) Police officers immediately arrested the man.

The protest seemed to conclude uneventfully. Around 10 p.m., the protesters left Oktoberfest and its throngs behind, marching south on Main Street and finally meeting a line of cops in riot gear at the intersection with Ameristar Boulevard, which leads to the Ameristar Casino. About twenty minutes later, an organizer announced the demonstration was officially over. He encouraged those gathered to meet up today at noon at the St. Louis Galleria in Richmond Heights, the site of a previous protest on September 20.

However, according to tweets from livestreamer Heather De Mian and social media posts from organizers, police arrested one protester after most of the crowd had already left the area. The circumstances of the arrest are not clear, but it appears the protester has been released. 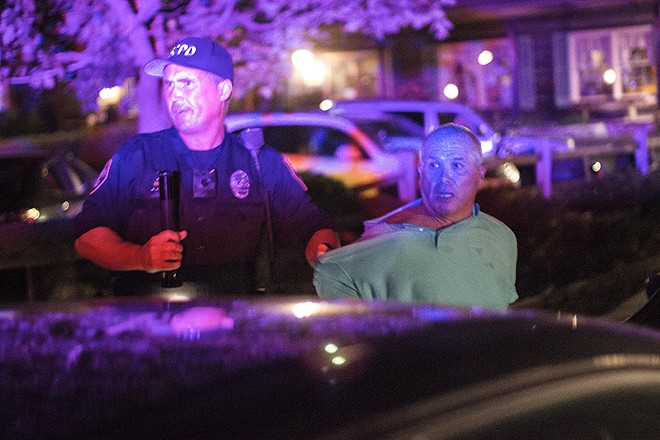