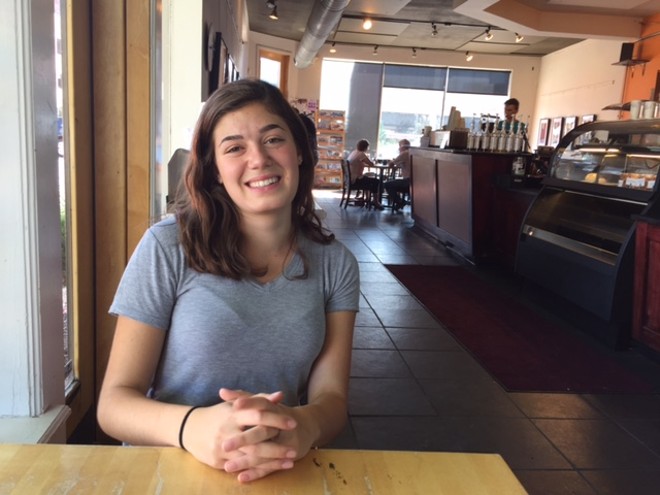 When police released a list of the people arrested during the protests that filled downtown St. Louis on Sunday night, they included 121 adults — and two high school students. Elizabeth "Lizzy" Mills and Josh Hagene are both seventeen-year-old seniors at Clayton High School. And both were cuffed and booked into the Justice Center Sunday, charged with "failure to disperse" and held for about seven hours until being released at 4 a.m. Monday.

Mills acknowledges that she did not make it to school the morning after — but Hagene did. "He had a meeting with the college counselor at 10 a.m.," she says.

Mills and Hagene first joined in the protests that broke out Friday, the same day Judge Timothy Wilson issued a ruling finding former St. Louis cop Jason Stockley not guilty of murder. The pair took the Metro into the city and joined protesters near Ballpark Village, staying until around 6:30 p.m. (At that point, Mills says, things were starting to heat up — police later made wide use of teargas — and her video production teacher, who was also there, warned them, "You should get out of here soon." They listened.)

On Saturday, they again took part — showing up to the Loop for the protest that began around 5:30 p.m. and leaving about three hours later. But it was Sunday when things got hairy.

Mills says the pair showed up at 3:30 p.m. and spent the rest of the afternoon participating in a peaceful march and demonstration in front of police headquarters.

It wasn't until 8:15 p.m. or so that the evening seemed to turn. As they marched, they could see cops lining the street, filming them and laughing at them. When Mills's mom texted, "When are you coming home?" Mills responded that it wouldn't be much longer — "probably 9, 9:15," she wrote.

"I got home a little later than that," she says ruefully.

As the protesters marched east into the heart of downtown, they encountered chairs set up in front of the public library for Shakespeare in the Streets. Some seemed to think the staging was intended to block them, and began to angrily hurl the seats. Some members of the group knocked over trashcans. Mills saw someone break a window.

The other protesters urged them to stop, but the damage was done. Cops in riot gear came up behind group the teens were marching in, pushing them into roads that seemed to grow progressively more narrow as they were funneled toward the river.

As the cops pressed in, Mills heard the sound of something breaking — and that's when she took off running. "I wasn't even sure what I was running from," she says. Somehow she found herself in the parking lot of the Holiday Inn adjacent to the convention center, a cop ordering her to get down on the ground. She complied.

She soon learned that the others around her had also been picked up nearby, including her high school friend. During the arrest, Hagene, who is black, was treated more roughly than she was, she says. "They let me take off my backpack before they cuffed me," she says. But they were both eventually loaded into a police van segregated by gender and taken to the Justice Center.

Mills says she was initially told she was being booked for "destruction of property." "[The officer] said he saw me break a window, but there's no way in hell he saw that, because it didn't happen," she says.

Photographed for her mug shot, the officers initially seemed surprised she was just seventeen, and then derisive. "It's not going to be as cute as your yearbook picture," one sneered. She smiled big just to spite him. Later, when they actually booked her, it was a charge of "failure to disperse," just like Hagene (and indeed, like 100 other people that night).

Those long hours in the justice center weren't pleasant (among other things, it was freezing cold). But in the women's holding cell, at least, there was camaraderie — "we were all braiding each others' hair," Mills recalls.

The others made fun of her shorts. "You came to a protest in shorts??" they guffawed.

"You're initiated now," the other women told her.

Even though the teens' mothers posted their bonds before midnight, it wasn't until 4 a.m. that they were finally released. Many mothers would be fuming, but Mills knew hers wouldn't. In fact, Mills knew she would be back for the protest that started in Clayton on Wednesday night — and that her mom, who happens to be a civil rights lawyer, would be OK with that, too.

"My mom raised me to be an advocate for what I believe in," she says. "I don't spend the time to educate myself to stand by and watch things happen. That's why I think my mom understood that even if she said I couldn't go, I would find a way to go." She was happy when field hockey practice was canceled due to the threat of protesters since that made it easier to get to the protest on time.

Mills and Hagene are both involved with a program called Cultural Leadership St. Louis, an organization that brings Jewish and black people together to fight for social justice. For Mills, the issues have never been far from her mind — but the program has served as a powerful introduction to what she calls her "social justice calling." She's now applying to colleges where she can study film and communication studies as well as social justice.

For any white allies who are thinking about joining the movement, Mills would encourage them to jump right in.

"Don't look back and say I should have gotten involved," she says. "And to those who don't understand what we're doing out there, come out and talk to us. Let us show you. We are willing to educate you. That's the whole point of the movement."