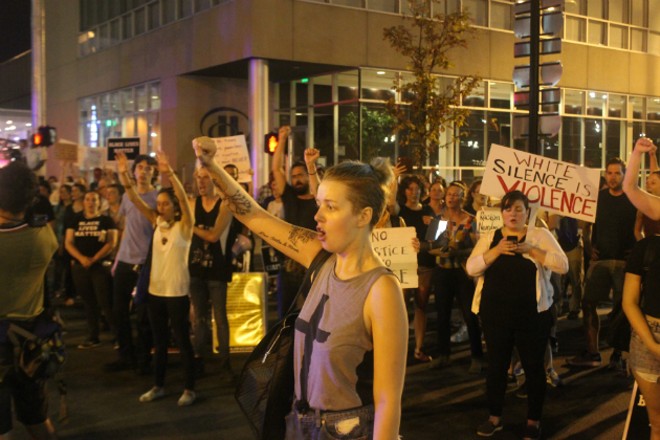 On the seventh day after former St. Louis police officer Jason Stockley's acquittal, white people packed South Broadway in front of Busch Stadium to protest the decision while white Billy Joel fans squeezed past to cheer on the piano man.

The demonstration, coordinated by the same organizers as previous days, was originally billed as a "white allies only" protest. A later version of the online flier was updated to describe it as a call to action for "movement allies" in an attempt to be more inclusive. Regardless, the result was a shift from crowds that have been about half black people to a group that was primarily white.

Darrell Hayworth, 28, says he initially felt a little uncomfortable with the premise, but ultimately embraced the idea of allies stepping forward for a night.

"Unfortunately, some of us are being hit harder than others, and some of us have the ability to help," says Hayworth, who has protested nearly every day since Stockley, a former St. Louis police officer, was found not guilty of murdering in the 2011 killing of Anthony Lamar Smith.

The group of several hundred people met at Kiener Plaza downtown and soon headed onto Broadway, where protesters blocked the street before marching south to rally in front of the stadium.

"White silence is violence!" people shouted, sometimes shifting to "no justice, no profits!"

Metal barricades, erected earlier in the day, ringed the stadium and a couple of dozen St. Louis bike cops lined up behind them. There were some tense moments when protesters knocked down a section of the barricades in front of the stadium's Spruce Street entrance, and again later when the crowd shifted south and jammed against the barriers at the southeast corner of Busch.

Police un-holstered cans of pepper spray at times, and a few shined flashlights into the eyes of protesters and people filming them. But there were no cops in full riot gear on the front line, no slapping batons against shields as protesters had seen in the past.

On Wednesday, when peaceful demonstrators headed out to west county and marched north from the St. Louis Galleria mall, county police in full protective gear quickly declared the protest an unlawful assembly and ordered everyone to disperse — a move police said was necessary because the protesters had blocked roads.

Outside Busch, protesters sometimes chanted, "Why are you in riot gear? We don't see no riot here," although the bike cops were dressed in blue polo shirts and bike helmets. One of the only items of extra protection seemed to be the goggles that a number of officers wore.

"It's just a standard helmet," one officer told protesters.

A few dozen Billy Joel fans — men in golf shirts and women in blouses or dresses — slipped alongside the crowd, searching for an open entrance. But most fans seem to have entered early or on the other side of the stadium. The protesters stayed into the first song — "My Life" — before marching back north, carrying a 48-by-80-inch painting inspired by the Stockley case.

Artist Doug Weaver, 29, arrived at 8 a.m. at Kiener Plaza and painted all day, finishing about 5:30 p.m., an hour before the protest began. He says he had some reservations painting about a situation and "a pain that I don't experience daily" as a white man, but he thought it was also his responsibility to use his work to comment on what was happening around him. 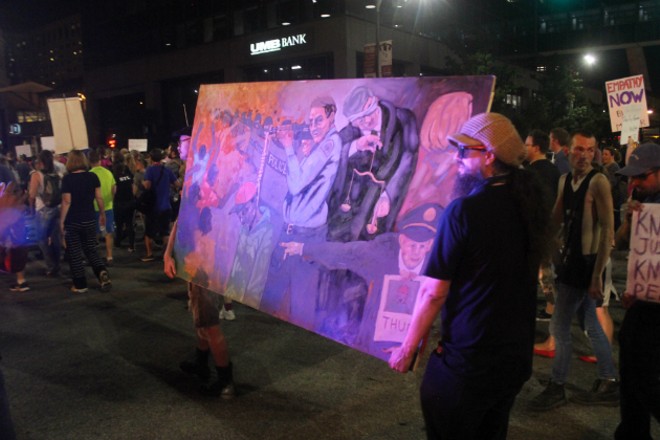 The protesters returned shortly before 9 p.m. to the intersection of Market and Broadway at the southeast corner of Kiener.

Mama Cat Daniels, one of a small number of black people at the march and the leader of the Pot Bangers organization that began feeding protesters in Ferguson, joined organizers in center of a ring of protesters.

"I'm not really a person who curses," she told the group, "but this is some beautiful shit."

Daniels told the Riverfront Times she was encouraged to see so many people of different races and ethnicities take to the streets. With the help of a bullhorn, she led the group in "Ella's Song" to close out the demonstration.

"We who believe in freedom cannot rest," protesters sang as they marched back into the park. The crowd thinned, but dozens of people hung out around "The Runner" fountain.

There were reports of one arrest after the demonstration had ended. Witnesses claim a man shouted at them and tried to take at least one person's phone, leading to a clash with protesters. A woman was reportedly taken into custody briefly.

We have reached out to police for comment and will update this story if we hear more.

Update: St. Louis Metropolitan Police say officers issued two summonses for "peace disturbance" at about 11 p.m. at North 6th and Chestnut streets, which is on the northern edge of Kiener Plaza.

Asked whether police decided to step back response (no police in riot gear on front line) last night, a spokeswoman had this to say: "Our approach has been allowing citizens to exercise their First Amendment rights. We deploy tactics when criminal activity arises and escalation depends on the level of aggression."