St. Louis Residents Call for State Audit of City — With Focus on Police 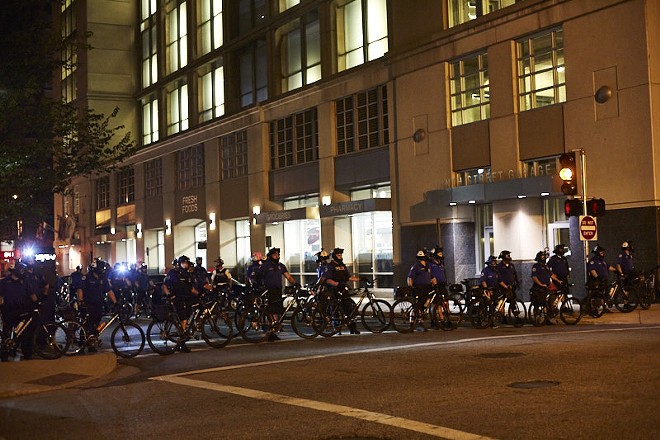 Local activists are pushing for a state audit of St. Louis' Department of Public Safety — something they say will ease public concern over how funds are allocated to police.

In June, Comptroller Darlene Green released an audit of the St. Louis Metropolitan Police Department's overtime, finding that hundreds of thousands of overtime hours could not be verified. Now a group of progressives calling itself Audit STL is pushing for state Auditor Nicole Galloway to dig even deeper.

"No Audit, No Sales Tax Increase," is the slogan they've adopted, referencing the sales tax increase being pushed for November to fund salary increases for police and fire.


The group is comprised of roughly a couple dozen members, including volunteer Glenn Burleigh. "We want professionals to look at this," Burleigh says. "If you look back at the finances of the comptroller audit, there are major budgetary controls missing. That's why we want the state auditor to look at it. We want professional advice from an outside party." Galloway's office has already accepted the proposal to audit the city of St. Louis, with a focus on its public safety department. Public safety encompasses 54 percent of the general operating budget — such a large portion that group members say Galloway has told them it would be impossible to audit the department without auditing the city as a whole.

Now Audit STL just needs to collect 6,527 city voter signatures within a year to make it happen. Burleigh says the group will be working to make it happen — with plans to collect 10,000 just to be safe. "We have a core group of volunteers that are from different neighborhoods around the city," Burleigh says. "We have an event this weekend at Foam, we've had really good social media response today. The audit's going to take work, but there's been audits triggered by city petitioners in the past. We really think we can do this with volunteers."  The group is also working with Alderwoman Megan Green, who represents the 15th Ward. "I think the citizens who are concerned about it seem to be doing a pretty awesome job," Green says. "I think it will be a pretty easy sell for them." Previous audits of the city of St. Louis have not included the police department, because until September 2013, the police department was under state control. However, the city gained control of its police department after former Mayor Francis Slay signed an executive order to accept control of the department from the State.

"I think that all of city government should be audited on a pretty ongoing basis," Green says. For info about the event at Foam, see the group's Facebook page.