The deal calls for a one-year trial using as many as 1,300 cameras furnished by Axon, the Arizona-based company formerly known as Taser International.

It was approved during a wild, crowded meeting of the Board of Estimate and Apportionment set against the backdrop of ongoing protests following Friday's announcement that ex-cop Jason Stockley had been found not guilty of murdering Anthony Lamar Smith in 2011.

Smith's mother was seated in the front row of the crowd of 120 to 150 people, as was Gina Torres, whose son, Isaiah Hammett, was killed by police in June during a raid on the family's home. The board's three members — Mayor Lyda Krewson, Comptroller Darlene Green and Board of Alderman President Lewis Reed — debated the issue for more than two hours, bickering with each other as well as audience members who demanded they approved body cameras today.

Reed brought the contract to the board, which signs off on the city's annual budget and approves appropriations of city funds. He says the deal provides free cameras and all support services for a year.

"It's not going to cost the city one, thin dime," Reed said.

But the timing sparked a bitter back-and-forth. Krewson and Green, who both say they support cameras, blasted Reed for springing the contract on them without giving them enough time to review it. It's rare for the president to bypass the aldermanic board that he presides over. And Krewson and Green said they didn't see even see the contract until today.

They accused Reed of tactics motivated by politics rather than the good of the city.

"I don't like that any time we have an issue with our people, you grandstand," Green told him, later asking Reed whether it was true his associate was a rep for Axon. The Board of Aldermen's former counsel, attorney David Sweeney, is registered as a lobbyist in Missouri for Axon, according to state records.

Reed brushed aside any criticism of his motivations, saying the city has had three years since Michael Brown was killed in Ferguson to bring in body cameras.

"Anytime you stand up for your people, they call it grandstanding," he said.

Krewson suggested the city follow its counsel's suggestion and look over the deal during the next two days with plans to execute the contract by the end of Friday.

"I don't understand why we can't go about this the right way," she said.

Audience members didn't want to hear it, chanting "Lyda Krewson, vote yes!" at one point. In the marches following the Stockley verdict, protesters have filled the streets, demanding justice and police accountability. Torres came to today's meeting on what would have been her son's 22nd birthday.

"You see these kids right here?" asked Torres, gesturing to Hammett's ten- and six-year-old brothers. "They're scared of police since they murdered my son." 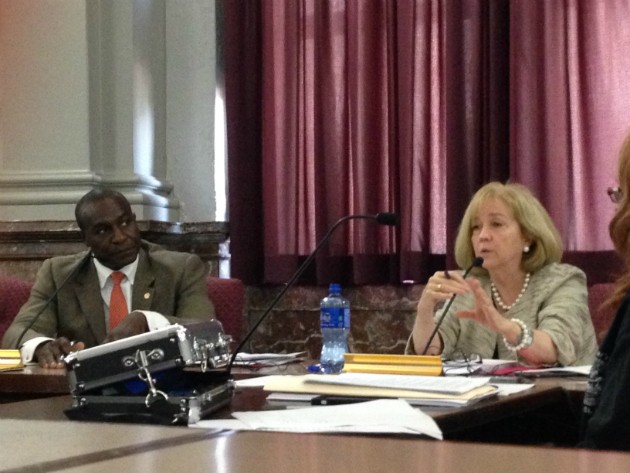 Others in the audience asked the board to approve the contract now and work out the details during the year-long trial. Green and Krewson eventually agreed to a compromise: They would approve the trial as long as the motion included a provision to complete a competitive solicitation process — called a request for proposals, or RFP — by the end of 2017. Reed agreed.

"It's a permanent solution, rather than a political solution," said Green, who argued the RFP process would allow the city to figure out long-term funding for cameras.

Even with the board's approval, there are still a lot of unanswered questions. Any deal for body cameras would presumably need the approval the city police union, and Krewson says they will need to work out issues of training and privacy concerns before officers begin recording interactions. The problems are not insurmountable, and the compromise should give them an opportunity to meet with Axon about concerns, she says.

The board meeting was the first time the mayor has faced the public since Stockley was found not guilty. She postponed a town hall that was previously scheduled for last night and has preferred to issue statements through email, social media and press conferences that have only been open to press.

After today's meeting, she said she does plan to re-schedule the town hall but wants to do it when a meeting would be more "productive."