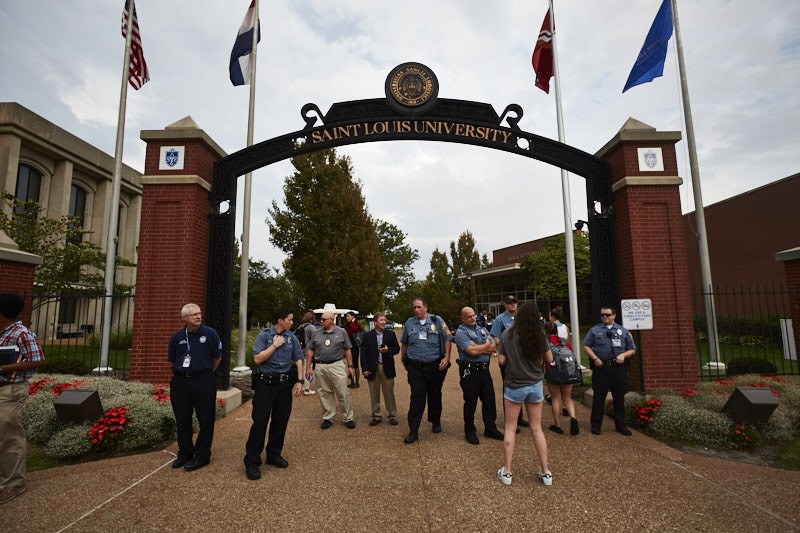 The street-filling marches and police clashes get all the attention, but St. Louis students have also begun protesting at their schools following the acquittal of an ex-cop charged with murder.

Students in at least three metro high schools, a junior high and universities have staged walkouts or demonstrations since Friday, when Judge Timothy Wilson delivered a not-guilty verdict in the trial of Jason Stockley. The former St. Louis police officer fatally shot Anthony Lamar Smith in 2011 following a high-speed chase in north city.

Hixson Middle School students walked out of their Webster Groves classrooms on Monday morning and held a demonstration on their football field as teachers and administrators kept watch.

Their older peers at Webster Groves High School also marched out of their classes for part of the morning, circling the building and chanting.

About 250 WGHS sts engaged in peaceful protest now. Staff and WGPD on hand to support their safety and expression.

Teachers marked them absent for the classes they missed, but school leaders didn't seem too upset.

"It is our hope that students who participated today learned the value of peaceful assembly," Webster Groves Superintendent John Simpson wrote in a letter to parents.

University City High students walked out on Friday and held demonstrations again on Monday led by the student group U Woke. Kirkwood High School students chanted "No justice no peace" as they marched to their football field on Monday.

The same morning, University of Missouri-St. Louis students braindished signs, banged instruments and called out, "The whole damn system is guilty as hell."


On Sunday, as roughly 1,000 protesters marched from the St. Louis Metropolitan Police Department onto the campus of Saint Louis University, SLU tweeted out an alert — "All campus communities shelter" — as if a natural disaster were coming.

But dozens of SLU students were among the protesters. That became apparent when university cops tried to bar marchers from the west side of campus, and student protesters pulled out their school IDs and held them above their heads.

The university's president eventually met with a group of the student protesters, and SLU tweeted that the peaceful protesters had left — "You can resume regular activities."

All peaceful protestors have left the campus and the area. You can resume regular activities. DPS will remain on campus.

Katie Hayes contributed to this story.