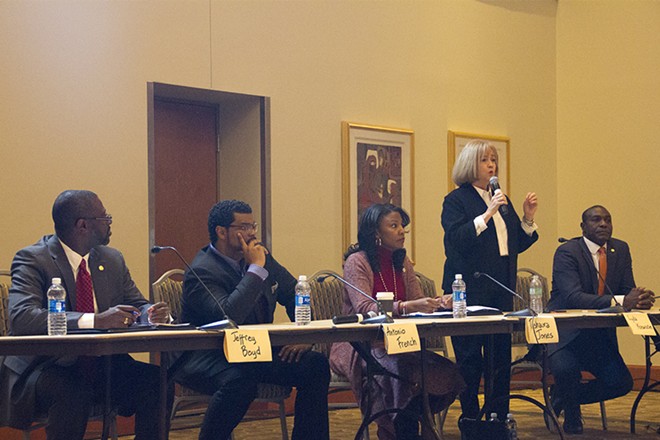 Mayor Lyda Krewson is scrapping plans for a town hall meeting amid ongoing protests following the Jason Stockley verdict, saying there's already plenty of discussion going on in the streets and on social media.

Krewson was previously scheduled to listen to constituents' concerns this evening at Vashon High School, but less than six hours before the 6 p.m. start time, she released a statement announcing plans to postpone the meeting.

No new date was provided.

"After much consideration, we are postponing our Town Halls for this week because they are happening in the streets and in my inbox and on social media right now," the mayor says in the statement. "We are listening."

Protest organizers had called for today to be a day off from the street demonstrations of the past four days, but big crowds were nevertheless expected to show up this evening for the town hall. Thousands of people have marched since Stockley, a former St. Louis police officer, was found not guilty on Friday of murdering Anthony Lamar Smith.

The daytime protests have been largely peaceful, but Krewson condemned after-dark vandalism by small bands of "agitators," who have clashed with law enforcement. Her house was an early target on Friday night when someone broke the windows while a crowd of people gathered out front, sparking a heavy police response that included teargas and rifle-fired pepper balls.

"I've said before that destruction of property and violence toward others will not be tolerated," she says. "For agitators or those who fail to follow police orders, this may mean arrest."

Law enforcement arrested 123 people on Sunday, nearly all of them for failing to disperse after police, citing vandalized property downtown, declared the people on the streets were no longer engaged in a peaceful assembly.

Police boxed in, or "kettled," a small group of people in the middle of downtown and swarmed in to make mass arrests. A chorus of officers was heard by media on scene and others, mocking the protesters with chants of "Whose streets? Our streets."

Interim police Chief Lawrence O'Toole later said in a joint news conference with the mayor that "police owned the night."

Here is a link to a video that confirms what journalists heard, police chanting "Whose streets, our streets" 2X. https://t.co/NwjEUEJ7LI

In Krewson's statement, she references complaints of heavy-handed police tactics.

"But I also want to be clear that intimidation is not conduct that lives up to the standard of behavior expected by City police officers or any City employee," she says. "I want to assure all citizens that complaints of misconduct that have been made are being reviewed by the Police Department's Internal Affairs Division."

She later addressed the "Whose streets?" chant more directly in a letter to the American Civil Liberties Union of Missouri, which had described the taunting as "intolerable" and asked the mayor to rein in officers.

"Chanting 'Whose streets? Our Streets' — is not appropriate and does not serve to de-escalate the situation and encourage peaceful behavior, which is our goal," Krewson writes. "Our officers are working hard under difficult circumstances and have shown considerable restraint over the last four days. That said, I agree that our officers have to be professional at ALL times, even if disrespectful language and behavior is exhibited towards them."

In her postponement announcement, she says the issues driving protests extend beyond the Stockley case to a legacy of "institutional racism," which can't be blamed on protesters or police.

Editor's note: This story was updated after publication to add details from Mayor Krewson's letter to the ACLU of Missouri.