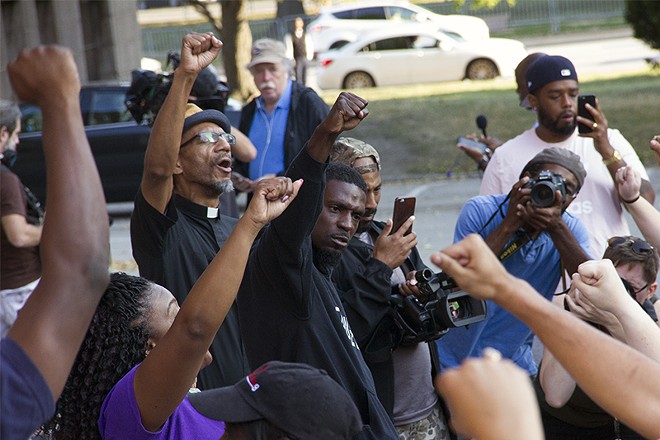 Following a night of protests punctuated by mass arrests — which swept up livestreamers and journalists along with alleged vandals — demonstrators returned to downtown St. Louis this morning with a message for the media and city police.

"They're going to talk about the narrative of a good protester and a bad protester," said organizer Tory Russell, addressing a crowd of around 100 on the steps of City Hall.

"If you a protester you a protester," Russell continued, thundering, "If you a vandalizer, you a vandalizer! If you an agitator you an agitator! If you an organizer you an organizer! You define yourself. We will define this movement. We are not divided. We are organized. We are unified. We're strong. So don't let 'em divide us!"

Over the last four days of protest following a not guilty verdict of former St. Louis cop Jason Stockley, a pattern of sorts has emerged: Peaceful protests draw thousands to the streets and then disperse after several hours, only to give way to nighttime agitators and teenage vandals wreaking havoc on local shops.

The ensuing destruction — and arrests — grab headlines and blur coverage of what has, overall, stood out as a peaceful outrage over a judge's decision to acquit Stockley, who had been charged for murdering Anthony Lamar Smith in 2011.

On Sunday night, more than 80 people were arrested in downtown. Inflaming tensions further, reports from the ground indicate the police response cast a wide net. Protesters said they were boxed-in and arrested, despite their attempts to leave the area.

This morning's protest concluded around 8:45 a.m., after about two hours. Police made no arrests. Before the crowd dispersed, state Representative Bruce Franks Jr. (D-St. Louis) asked that activists reconvene at 6:30 p.m. at the Delmar Loop, where more than 1,000 people marched on Saturday.

That peaceful gathering, too, was followed by a night of broken windows and arrests.

For more on the ongoing protests and background on the Stockley verdict, make sure to check out our previous coverage.

— See also: The Loop Is Open for Business — and Drawing Big Crowds