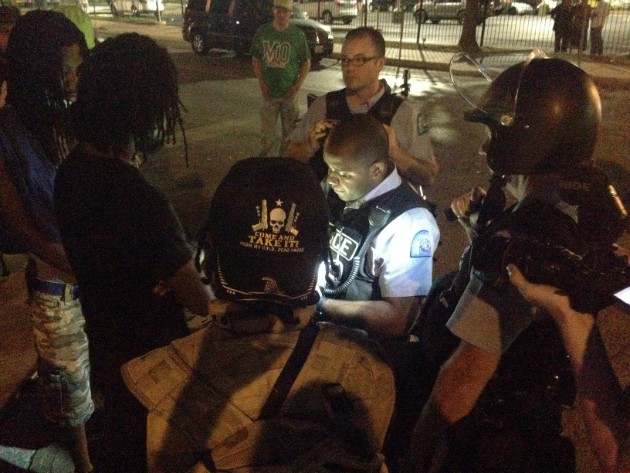 A tense moment on Sunday outside of police headquarters separated a long afternoon of peaceful marching from another night of broken windows and arrests.

About 7:30 p.m. on the third day of protests following the acquittal of ex-cop Jason Stockley on a murder charge, an officer driving an unmarked patrol car put the blue Impala in reverse and shot through an approaching crowd, narrowly missing protesters who scrambled out the way.

People chased the sedan south on 20th for about a block and a half, a few chucking water bottles before protest organizers shouted at them to stop.

The chaotic scene began with a 7 p.m. a traffic stop at 20th and Locust streets, near the northwest corner of the St. Louis Metropolitan Police Department. Officers pulled over a minivan and arrested the driver and a passenger. The driver was wanted for first-degree assault and the passenger for making terrorist threats, according to police. Officers confiscated three guns, police say.

Officers arrested a third suspect who threw a rock at them. They put him in the back of the Impala, police say.

Here's the video the car backing down the street. No one was hit. pic.twitter.com/v6n1xHqTwq

The scene took place outside of the view of the majority of protesters, who were around the corner on Olive after an hours-long, peaceful march. At least half of the crowd, which was probably about 1,000 people at one point, had left by then.

Richard Williams and Johnny Roberts Jr. say they were on their way out when they walked up the street toward the traffic stop. That's when officers from the unmarked patrol car grabbed them.

"We was leaving," Williams says. "I didn't even know they were getting pulled over."

One officer threw Roberts up against wall of the station, and another started to take Williams into custody before other officers told them they had the wrong guys, according to Williams.

About the same time, one of the protesters sprinted down the street and around the corner to tell others police were taking people into custody. Several dozen people began hurrying over to 20th to see what was happening.

The two officers hopped into the unmarked patrol car and backed down the street. It wasn't full speed, but it wasn't slow either. People screamed as they dodged the fleeing Impala.

The threat of cars driving into crowds has been one of the concerns of demonstrators, who have been protesting in the streets since Friday when Jason Stockley was acquitted of first-degree murder in the 2011 killing of Anthony Lamar Smith. An anti-racist protester was killed last month in Charlottesville, Virginia, when a white supremacist drove a Dodge Challenger into a crowd of demonstrators, and marchers in St. Louis have been leery of approaching cars.

City police say their officer  backed down the street for safety because the crowd "started moving in a threatening manner" toward the car, police said in an email. They also posted a surveillance video clip of the Impala driving away. (See below.)

Williams and Roberts say the officers roughed them up for no reason and then the driver reversed wildly through crowds of people, who could have been injured.

"He needs to get locked up for reckless driving," Williams says.

The incident happened at the tail end of Sunday's main march, which began with six minutes of silence meant to symbolize the six years since Stockley killed Smith.

Leaders in the crowd worked to usher protesters away from a police line that formed around the Impala, and then talked with police representatives about what had happened. Officers eventually took statements from Williams and Roberts about their clash up the block with the other officers.