Yes, That Was Nick Cannon Protesting in St. Louis Yesterday 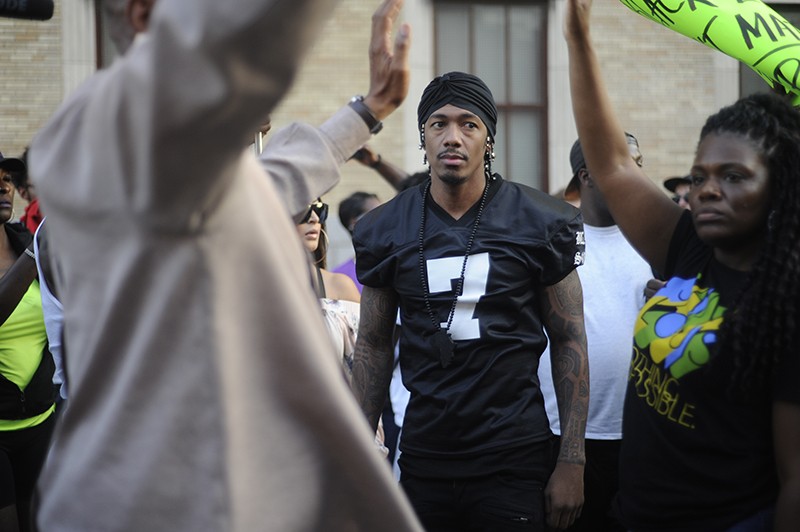 Actor/comedian Nick Cannon showed up at the protest in the Delmar Loop yesterday, wearing a Colin Kaepernick jersey.

The protest, which drew more than 1,000 marchers, was entirely peaceful until more than an hour after organizers announced it was over and urged people to go home, leaving behind a smaller band. At that point, many storefronts were smashed and police arrested at least six.

Cannon was there for the earlier part of the evening, when a joyful crowd marched through the Loop and then further south and west before finishing again in the commercial district.

Cannon posed for a photo with St. Louis Alderman John Collins-Muhammad and was captured marching in a video shot by digital journalist Annam Siddiq.

Take it to the streets. #Justice #STLVerdict with @NickCannon! pic.twitter.com/ivVhFGYLqe


TMZ informs us that this is not Cannon's first trip to the Midwest to advocate for the Black Lives Matter movement: He previously showed in Cleveland last year to protest at the Republican National Convention.

Protesters reacting to the acquittal of former St. Louis cop Jason Stockley on murder charges have filled the streets in the last two days, including a Central West End protest that triggered heavy police action and a march last night in the Delmar Loop.

State Representative Bruce Franks (D-St. Louis) has called on the group to reassemble at 3 p.m. in front of police headquarters in Downtown West.