The Loop Is Open for Business — and Drawing Big Crowds 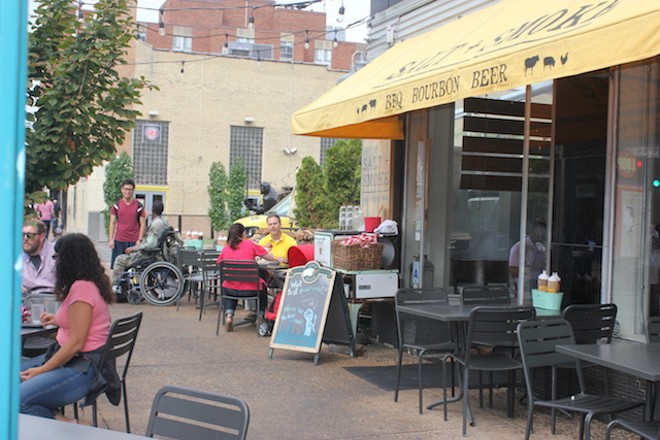 Less than twelve hours after agitators broke storefronts windows across the Delmar Loop, the neighborhood wasn't just open again for business: It was positively bustling.

Stores opened their doors. Restaurants served up ice cream cones, tacos, sandwiches and bibimbap. At least one restaurant — barbecue restaurant Salt + Smoke — offered outside seating, a way to give diners a view of the outside even though several of its large glass windows are now covered with plywood.

And on storefront after storefront, volunteer artists associated with the Paint for Peace movement, began to prepare plywood boards for their transformation from necessity to canvas.

The movement, which sprung up during the Ferguson protests, beautifying temporary plywood on South Grand and in Ferguson itself, spawned a children's book and even a gallery show at COCA. Now the painters are back at it — and so many showed up by late morning that some businesses had taken to marking their plywood coverings with notes: "Window claimed. We have an artist on the way who will paint this space."

In front of the Tivoli Theatre, as services ended at U-City Family Church, which meets inside, church members handed out balloons to passersby and treated others to ice cream from a truck parked on the sidewalk.

The damage done to the street is very real — most storefronts from Melville to Limit, which is the heart of the commercial district — suffered broken glass. Many business owners toiled through the night to clean up the mess, aided by volunteers and neighbors. Others continued to work to get ready to open, a little bit later than their usual Sunday hours.

But around noon, everyone was smiling.