by Doyle Murphy and Danny Wicentowski

St. Louis police arrested 32 people during Friday's protests of the acquittal of ex-cop Jason Stockley on a first-degree murder charge.

"Many of the demonstrators were peaceful," O'Toole said in a video message shared online early Saturday morning. "However, after dark, many agitators began to destroy property and assault police officers."

Nine city officers and at least one state trooper were injured when protesters threw rocks and bottles, the chief says. The worst of the city cops' injuries included a possible broken jaw and a dislocated shoulder, according to O'Toole.

Demonstrations began shortly after Judge Timothy Wilson's verdict was announced on Friday morning. Stockley had been accused of murdering Anthony Lamar Smith on Dec. 20, 2011 and then planting a gun on him to cover it up.

Protests during the day led to occasional clashes with police, and demonstrators regrouped at about 7 p.m. in the Central West End. Hundreds of people marched along Forest Park Parkway and then south on Kingshighway before turning around and heading back north, picking up more people as they went. They eventually met up with a second group in the Central West End, forming a crowd that easily numbered more than 1,000 people.

The march was accompanied for much of the evening by drummers, and diners in the popular night life and residential district watched the procession — sometimes from outside tables on the sidewalk. Pi Pizzeria owner Christopher Sommers was among business owners handing out water to protesters who filled Euclid Avenue for blocks.

"This the largest group of people I've seen assembled in a really short order," Sommers told the Riverfront Times early in the night. "It's cool that people are getting up from the tables and joining the protests. Our guests are asking, 'Hey, can I help hand out water?'" 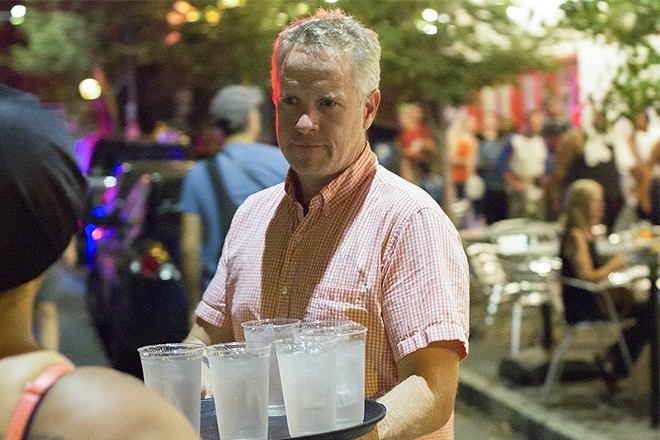 But Sommers would face a different scene by the end of the night. Helmeted police officers, carrying riot shields, marched down Euclid, pausing to fire pepper balls and tear gas at small bands of protesters who remained on the streets after 11 p.m.

Officers began trying to sweep protesters out of the Central West End shortly before 10 p.m., after a confrontation outside Mayor Lyda Krewson's house. A crowd of several hundred people marched west on Waterman Boulevard into the residential neighborhood.

Michelle Ewald and her nine-year-old granddaughter watched from her front yard as people streamed past. She says she supported the protesters' message and wanted her granddaughter to see them.

"Thank you," she called at passing demonstrators. "Thank you for the peaceful protest."

Moments later, the procession turned north on Lake Avenue toward Krewson's place. Marchers stopped in front the house, chanting "Wake up, Lyda!" and clapping in unison.

But then someone in the crowd smashed windows on the ground floor and hit the house with red paint, sending the bulk of the crowd running south. 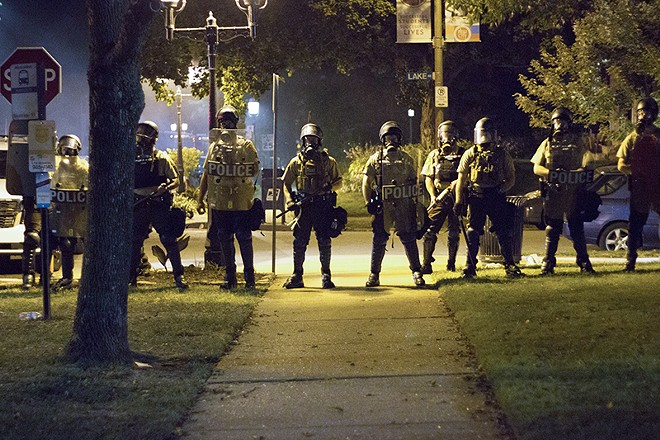 The first officers arrived within minutes and began forcing people, sometimes physically, away from Krewson's house, screaming, "Get the fuck off the property!" Reinforcements streamed in until police had enough to form a line and push the remaining demonstrators two blocks south to Waterman Boulevard, an east-west residential street, where another line of officers in riot gear was waiting.

Fearing they were about to be surrounded and trapped by the two lines of police, protest leaders shouted for people to run. Many did.

"They did this in Ferguson," an organizer warned. "They will beat your fucking ass. Go!"

Over a loudspeaker, police warned that they no longer considered the gathering a peaceful assembly. They donned gas masks and fired teargas shortly after, driving the crowd back toward Forest Park and onto Union Boulevard, where demonstrators mostly scattered.

Another band of protesters was similarly ejected from the eastern portion of the street that becomes Hortense Place between Kingshighway and Euclid. At the gates of the block-long stretch, one protester was seen throwing a rock or brick toward an advancing line of police. Officers massed near the mouth of Hortense. When five to eight people across Euclid continued to shout at them, jumping on a parked car at one point, officers fired pepper balls at them.

Police eventually pushed into Euclid and began marching north, driving back protesters and sending a handful of late-night diners scurrying away from sidewalk tables and into restaurants. Officers fired multiple rounds of pepper balls at people on the street, as well as tear gas. Some restaurant customers could be seen through windows, holding their mouths and coughing.

Police later posted photos of a scorched dumpster that they say was set on fire by "agitators," two of whom were arrested. The timing of the fire was unclear, and RFT reporters on the scene until about 11:20 p.m. did not witness it. Police also say they confiscated a handgun on the street. 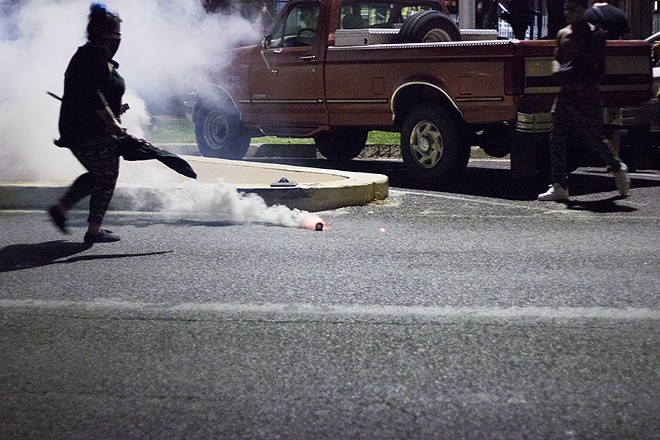 Sommers stepped outside of Pi, which is toward the north end of the bar and restaurant district, as police closed in. By that time, the streets had almost entirely cleared, except for cops firing pepper balls at stragglers from the protest. One officer — "a little dude" — was "just randomly firing at people, and when they would call him out on it, he would fire again," he says.

"It made no sense," Sommers adds. "There was no rhyme or reason to it. It was not based on any escalation or perceived escalation of events."

He says police launched a tear gas canister at his restaurant and shot a man nearby with a pepper ball as he watched. 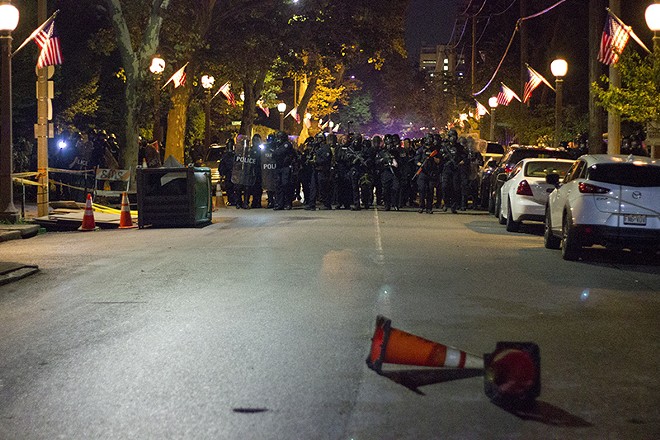 Theo Welling contributed to this story.