When a Firefighter Cleared Culpepper's Window, It Set Off a Firestorm 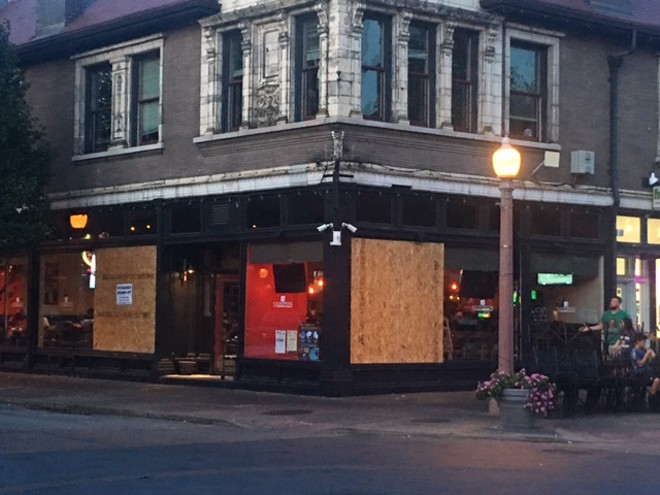 Late last night, police released a second video showing the suspect — and they now the department says that the uniformed man seen in the video is a firefighter — not a cop. He was clearing out the glass, they say, but it was part of his training. See our update below; original post follows.

A video shot last night in the Central West End appears to show a police officer breaking the glass window in front of Culpepper's restaurant — leading to many people questioning whether the officer was responsible for damage attributed to protesters.

However, a still photo captured by a neighborhood resident shows that the window was first broken about 30 minutes before the video begins. The photo suggests that the officer's actions — and the breaking glass heard on the video — may have been an attempt to clear out a window that was already partially broken.

Katie O'Connor, who lives in the neighborhood, says she and her husband witnessed a young man throw something at Culpepper's, through what was then an unbroken window, around 11 p.m., breaking it. Almost immediately after, she snapped the photo above. It clearly shows the large street-facing window has been broken.

At the time, there were not many police officers around, O'Connor says. But officers marched into the neighborhood soon after — and that's when Chris Phillips started shooting the short video that has generated so much interest.

Phillips, a documentary filmmaker whose company is called Maverick Media Group, uploaded his footage to Facebook earlier today. In it, Phillips captures the scene as cops march down the street in a line — part of their attempts to control the protests that broke out in the neighborhood yesterday following the acquittal of former St. Louis cop Jason Stockley.

But the sound of glass breaking loudly causes the cameraman to swing the camera sharply to the left, training it on Culpepper's.

Then the viewer sees a lone police officer walk away from the broken window. He's the only person in the immediate vicinity, and seems to be trying to walk away after the video camera is trained on him, looking nonchalant. [Editor's note: That officer has since been IDed as a firefighter/paramedic.]


The reaction from observers on the street nearby is instant, and shocked.

"You're dumb as fuck," one woman cries. "Why would they break the fucking windows?"

Says another woman, "He was kicking it down, for no reason."

A spokeswoman for the St. Louis Metropolitan Police Department says viewers shouldn't be so quick to be certain what they're seeing.

"This appears to be an edited video and it does not clearly show what happened," notes spokeswoman Schron Jackson. "Our department would be more than willing to investigate the actual, completely unedited video in its original form with the audio tracks in tact."

But Phillips says he didn't do anything to alter the audio of the video other than boosting the sound universally for the entire length of footage, allowing bystanders to be heard.

He says he made just one edit: Cutting from after the footage showing the cop leaving the area near Culpepper's to show nearby observers' reaction. That meant just eliminating about 20 seconds of dead time where nothing much happens, he says. (He has offered to upload the video in its entirety; we'll share a link once he does.)

"That cop was pulling his foot out of the window after it happened," he says — and he says he did not edit or alter that footage in any way. Whether the window was broken before he started shooting, he says, he does not know — and he has never claimed to know.

Phillips wrote in a public Facebook post earlier today that he was concerned by what the video captures, writing,


This will make you question the narrative that is out there. Last night (9/15/17) a St. Louis cop kicks in glass at Culpepper's Restaurant in St. Louis' Central West End. Apparently, many witnesses prior to this watched another officer break in some glass with a baton but I didn't catch it, and allegedly a young kid broke a window earlier but that I cannot confirm. My problem is if cops are recklessly destroying property, the activists and protestors WILL take 100% of the blame -unfortunately.


A St. Louis native, Phillips says he goes back and forth between here and LA. He previously shot the short film Ferguson 365, which will soon be getting its digital release, and is gathering new material during protests this weekend, including one at the West County Center mall.

O'Connor, the neighbor who witnessed a young man break the window around 11 p.m., says she and her husband both saw multiple people walk up to touch the broken glass that remained in the storefront.

"I don't truly know the officer's motivation — maybe he was breaking out glass as an asshole move, maybe he was clearing out dangerous shards (which did exist)," she tells us in an email. "But I am absolutely positive he was not the one who originally broke that window."

Police have released this surveillance video, which they say shows the person who broke the window at Culpepper's. The video shows a young man, who appears to be shirtless and wearing dark pants, as he strides toward the window and hurls something directly at it.

Police are asking anyone who can identify the suspect in the video to call CrimeStoppers at 866-371-TIPS (8477).

Police now say the man seen in Chris Phillips' video has been identified as a firefighter/paramedic who "observed the broken window and, as trained, cleared the remaining glass to eliminate the sharp and dangerous pieces."

Police also released more footage of the window's destruction and asked the public for help identifying the young man who originally broke it.

Editor's note: We revised this post several times, beginning with eye witness information on Sunday, September 17 that showed the window was damaged before the officer cleared it out. We updated again later that day to include video from the cops of the actual suspect.

Our edit on September 20 changed the headline to reflect new information from St. Louis Police: That the man shown in the video is not a cop, but a firefighter.