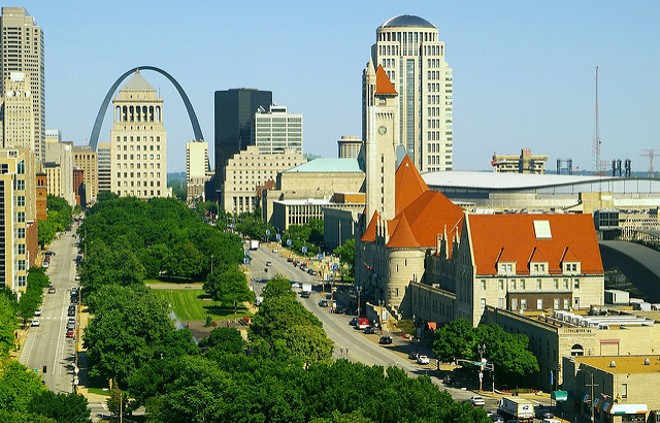 While so far there has been just one arrest — a man was taken into police custody at 11:30 a.m. after allegedly damaging a police car at 14th Street and Washington Avenue — in anticipation of protests, some St. Louis events scheduled for this weekend have been canceled or postponed, and some St. Louis businesses, schools and attractions are closed. Below is a list of these events and places. We will update this post throughout the day as we receive more information.

Know of anything we've missed? Let us know in the comments.

Moonlight Ramble
The 54th year for this annual nighttime bike ride through the city has been pushed to Saturday, September 23. Anyone with questions or concerns is welcome to message organizers on the event's Facebook page.

The Alzheimer's Association St. Louis Walk to End Alzheimer's Originally scheduled for Saturday, September 16 at Scottrade Center, the walk is being postponed for a later date that has yet to be decided. Alternative Missouri walks can be found here.

City Museum
The City Museum is closing at 5 p.m. this evening. According to a City Museum tweet at 11:06 a.m., the museum will reopen at 9 a.m. Saturday morning.

Gioa's Deli
The downtown location of Gioa's Deli (903 Pine St.) is closing today and will reopen on Monday.

Center Ice Brewery
The hockey-themed brewery is closing for today and will return to regular business hours on Saturday.

Tiny Bar
The wee bar at 1008 Locust announced on Twitter it would not be opening tonight.

Kirkwood High School
The student newspaper announced that all activities, including tonight's football game, are canceled. All students must head home after school is out. Details on rescheduling are TBA.

Shakespeare in the Streets
Shakespeare Festival St. Louis announced on its website that the Friday night performance of Blow, Winds, which was planned to take place in front of the St. Louis Public Library downtown (1301 Olive Street) is canceled. Check back to the event's website for updates.

St. Louis Symphony Orchestra
The symphony's 7 p.m. performance of Harry Potter and the Chamber of Secrets —In Concert at Powell Hall (718 N. Grand Blvd.) is canceled tonight. Ticket holders are instructed to hang on to their tickets; Patron Services will contact ticket holders with more information.

Some events are still decidedly on.

The Great Forest Park Balloon Race and Balloon Glow are moving forward as scheduled. We'll see you on Art Hill!

Other organizations are taking a wait-and-see approach.

We are assessing the situation throughout the day. As of now, the concerts will go on. Check our website & social media for up-to-date info.


We'll continue to update this post, so check back as we hear more.