by Sarah Fenske and Doyle Murphy 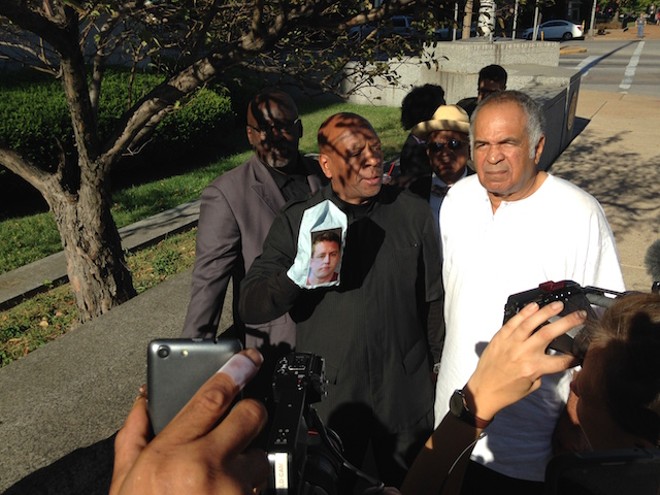 This morning's "not guilty" verdict for ex-St. Louis cop Jason Stockley drew an immediate, angry condemnation from activists, advocates and some legal observers.

Mike Brown Sr., whose son was killed by a Ferguson officer in 2014, setting off months of protests, told the RFT, "It's a bunch of bullshit. I feel for his mother and his father."

Added Brown, "Whatever happens, I just pray my city."

Said Pastor Clinton Stancil, "I can tell you this, it's going to be mass disruption like you've never seen before."

Anthony Shahid, the activist who pushed for years to see the case prosecuted, only to see a bench trial end in an acquittal after weeks of waiting, told reporters outside the courthouse, "This is what white privilege looks like in America."

Zaqi Baruti, a retired educator, said he had sat through the trial — and came away firmly convinced of Stockley's guilt. "Having sat through court and having listened to the evidence, he should have been convicted of something."

He added, "Any righteous person should rise up and do whatever is necessary to change this wicked system."

At Tucker and Market, a still-small group of protesters managed to stop traffic in the intersection by 9:30 a.m. The intersection isn't blocked completely — cars have been able to turn around — but it's become the focal point so far.

A small group of protesters set fire to a Cardinals sweatshirt around 9:30 a.m. Others debated what to do next. "We've turned the other cheek too long," one man says. The protesters began to march through the city streets.

Around 11 a.m., one man was taken into custody at Washington and 14th Stree after allegedly damaging a police vehicle, according to the St. Louis Metropolitan Police Department. He has been charged with destruction of property and failure to obey, police say.

Advocacy groups echoed the anger of those on the streets in sharply worded statements.

ArchCity Defenders, the non-profit legal firm that represents many victims of police brutality in St. Louis, said in a statement, "This case makes crystal clear that police officers may murder with impunity.

Its statement read in part:

ArchCity Defenders stands in solidarity with the family of Anthony Lamar Smith, whose name was added to the long list of black men and women killed by the police in the St. Louis region. Grieving families who lose loved ones at the hands of police officers all too often seek justice from a legal system that instead protects their loved ones’ killers. We saw this play out today in Jason Stockley’s case, a former St. Louis Metro Police Officer, who was not convicted for the murder of Anthony Lamar Smith.

This devastating verdict reinforces the message that law enforcement can use fatal, excessive force against communities of color and turn to the courts for protection. The egregious facts of this case underscore the failures of the criminal legal system even in clear cut cases of police violence. Officer Stockley carried his personal weapon, an AK-47, with him on duty in violation of department policy. Stockley was heard saying “I’m going to kill this motherfucker,” during his pursuit. He shot Anthony Lamar Smith five times at close range, with the “kill shot” being fired from six inches away from Mr. Smith. Officer Stockley’s statements at the scene contradicted that of other witnesses, too. Yet, he was acquitted. This case makes it crystal clear that police officers may murder with impunity.


The ACLU of Missouri said in a statement, "Police officer Jason Stockley’s acquittal today does not change the facts: Anthony Lamar Smith died unnecessarily, another casualty of excessive and deadly force by police against people of color.

"We extend our sympathies to Mr. Smith’s family and loved ones. This region—and our country as a whole—have seen too many deaths caused by police, with little accountability for the officers or department involved."

Said City Treasurer Tishaura Jones in a statement, "Judge Wilson's decision leaves me with more questions than answers. Officer Jason Stockley yelled he would kill Smith on a recording less than a minute before doing so, yet he walks out of court today a free man.

"...I do not advocate violence in response to the Wilson verdict. At the same time, the ultimate measure of how our community deals with this verdict is not how quickly we are able to get back to business, but whether we implement policy changes addressing injustice, racism and inequality. We can no longer prioritize short term order over long-term injustice."

Mayor Lyda Krewson released a statement saying that she was "sobered" by the outcome. "I encourage St. Louisans to show each other compassion, to recognize that we all have different experiences and backgrounds and that we all come to this with real feelings and experiences. We are all St. Louisans. We rise and fall together."

Editor's note: We've updated this post after publication to add new details, and will continue to do so as the day continues.