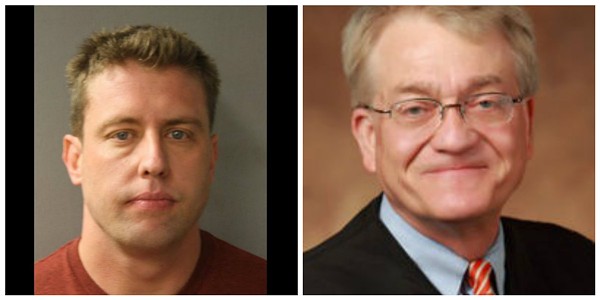 In most murder cases, a jury makes the decision — and gets no chance to explain its reasoning in open court.

The case trying former St. Louis police officer Jason Stockley — which resulted in an acquittal this morning, angering many activists and advocates — was different. Stockley waived his right to a jury trial, opting instead for St. Louis Circuit Court Judge Timothy Wilson to be his sole trier. And rather than issue a simple "guilty" or "not guilty" in the courtroom, Wilson issued a 30-page ruling this morning.

In the opinion, Judge Wilson references several times the agony he felt in rendering a judgment. Protesters had promised "mass disruption" if the verdict was "not guilty," but Wilson wrote that he could not let that sway him.

He opens his opinion by quoting from the Code of Judicial Conduct, which states that a judge "shall not be swayed by partisan interests, public clamor or fear of criticism." And then he proceeds to lay out, in great detail, the case against Stockley and why he believes it came up short.

The judge notes the high bar for conviction on a charge of first-degree murder — which requires that a person knowingly causes the death of another after deliberation on the matter [emphasis added]: 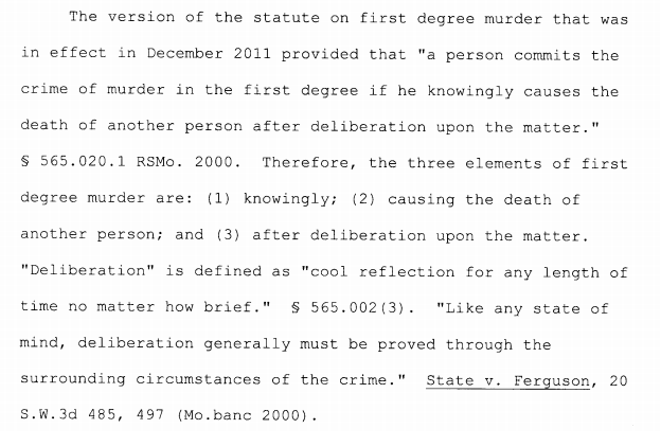 Time and again, the judge's opinion returns to the idea of deliberation.

For one thing, the judge notes, Stockley testified that he was not familiar with either the man he shot, Anthony Lamar Smith, or his car. He had no reason to have animus against the suspect.

And then, the judge notes, there are the "highly stressful and frenetic events during and immediately following the pursuit" — what the judge says in a footnote "are the antithesis of 'cool anything,' much less reflection."

Prosecutors made much of the fact that Stockley could be heard during the chase saying, "We're killing this motherfucker, don't you know."

But Judge Wilson did not believe that pointed to deliberation, writing,

He notes that, despite those words, Stockley did not approach the Buick and "immediately shoot Smith multiple times." Instead, there was some sort of confrontation through the window of the car first — a confrontation in which Stockley testified he believed Smith was reaching for his gun.

Wilson is careful to rest his decision not only on Stockley's testimony, but also on forensic evidence introduced at trial and the video shot by a bystander named Antonio French (not the city politician).

Wilson writes that he does not believe the prosecutors' contention that Stockley had fired a fifth "kill" shot after Smith was already mortally wounded, writing that the evidence simply didn't add up.

Instead, he notes some key information about the fatal bullet's trajectory:

Beyond that, the video appeared to convince the judge that Stockley could not have planted the gun on Smith after killing him. French, a bystander, captured the scene after Smith's car crashed — keeping his cell phone video going even as Stockley walked up to the car and, moments later, fired some shots into it from a distance of about six inches, killing Smith.

See also: The Murder Case Against Stockley Rests on Audio and Forensics

That means, however, that his video also captures the time when Stockley — under the prosecutors' version of the case — would have had to plant the gun he later retrieved.

That's something the video, and other testimony, seem to contradict, the judge writes.

Judge Wilson then adds a kicker — suggesting that Stockley had good cause to suspect the suspect might be carrying a gun.

In the end, Wilson writes, he simply was not firmly convinced of Stockley's guilt:

Judge Wilson reaches the state's mandatory retirement age of 70 this December, making this one of his final decisions.