The operation sounded impressive: a Missouri National Guard helicopter hovering overhead as a team of cops and sheriff's deputies bushwhacked through a field of weed hidden in the southwest corner of the state.

Pictures showed the happy raiders with so many confiscated plants, the greenery filled a landscaping trailer and the beds of two pickup trucks. By the end of Monday, they had carried out "one of the largest marijuana grow seizures in the area," crowed a Facebook post on the Jasper Police Department page.

Others agreed as the post racked up hundreds of comments, among them mocking congratulations to cops for confiscating the raw material of natural fiber rope. Jasper Police, who cover an area about twenty miles northeast of Joplin, pulled the post on Wednesday morning.

A department spokesman who had participated in the seizure didn't respond to requests for comment.

(Editor's note: We've now been able to speak with Jasper's police chief. See the update at the bottom of the story.) 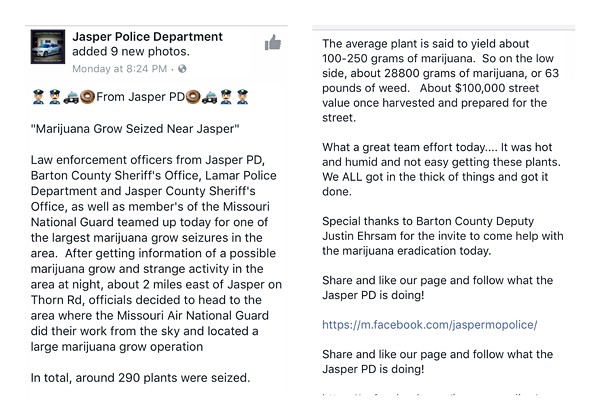 Legally, it really doesn't matter. Growing hemp is still against the law in Missouri, unless you're one of the two entities licensed to grow it. The state otherwise draws no distinction between hemp and marijuana, which are essentially variances of the same plant.

"It's still just as illegal," says Show-Me Cannabis Chairman Dan Viets, a prominent criminal defense attorney with years of experience handling marijuana cases. "It doesn't matter if you call it hemp or marijuana."

But there is a difference in the way Jasper hyped the operation. In a curious bit of show-your-work math, the department calculated the nearly 290 plants seized would have produced — "on the low side" — 63 pounds of marijuana with a "street value" of roughly $100,000.

"What a great team effort today," the Jasper department's now-deleted post read. "It was hot and humid and not easy getting these plants. We ALL got in the thick of things and got it done."

The clear implication is law enforcement had intercepted THC-rich marijuana destined to be sold on the black market and rolled into blunts — a far cry from sending that team of at least ten officers, deputies and a helicopter to hack down a patch of rangy, un-smokable hemp. The main difference between hemp and marijuana? You don't smoke hemp to get high.

We sent screenshots of the confiscated plants to a few people we thought could give us an informed opinion about what was seized.

"Sure looks like hemp to me," says Mitch Meyers, the CEO of BeLeaf, one of the state's two entities licensed to grow hemp for limited medicinal purposes.

"These look to me like wild hemp plants, because they are tall and without buds," Show-Me Cannabis Executive Director John Payne says. "That probably means that no one was actively cultivating them. If that's the case, the street value of those plants is next to nothing."

Dr. Jason Strotheide, founder of licensed hemp grower Noah's Arc Foundation, is less sure. He says it's "nearly impossible to tell the difference between hemp and marijuana until late in flower."

The attorney, Viets, says the important question in terms of a criminal defense is whether anyone was actually cultivating the plants. If they were just growing wild, there's no crime.

So far, it doesn't appear anyone has been charged as a result of the operation.

Lamar Police Chief Rusty Rives is the only one from any of the agencies to respond to Riverfront Times' interview requests on Wednesday. (We also tried the Jasper County prosecuting attorney but didn't hear back.) He says the "marijuana eradication" operation actually hit two sites that sit 25 to 30 miles apart — a couple of plants near Liberal and the main field a couple of miles outside of Jasper.

A Lamar detective flew in the Guard helicopter, acting as a spotter and relaying the information to the team on the ground. Rives says the agencies are members of the Ozarks Drug Enforcement Team task force, and the operation had been planned for some time.

We asked if he knows whether the plants seized would be considered marijuana or hemp. He says he wasn't present, so he can't say definitely, but he agrees to take a look at one of the photos.

"I'm just looking at the picture," the chief says, "but they look like marijuana plants to me."

We were able to speak to Jasper police Chief Chad Karr, who offered what he says is the backstory of the department's Facebook post.

The goal, Karr says, was never to brag about a bunch of pot plants, but rather to serve notice to a suspected meth dealer operating in the area.

Last October, Jasper cops intercepted nearly five pounds of Mexican methamphetamine they believe was headed ​to the dealer. A couple of alleged intermediaries were charged with federal drug crimes, but cops didn't have enough to pin anything on their main target.

In the past couple of weeks, police got a tip about their target growing weed east of town, Karr says. They had also received complaints of late-night ATV riders in the area. So on Monday they joined the other agencies for a "marijuana eradication" effort. On a helicopter flyover, a detective from another department spotted what looked like the promised grow operation, so they went in and cleared it out. Karr posted the info and pictures on Facebook, he says, with an audience of one in mind: their target.

In this telling, the problem for Jasper is that ​its Facebook post found a much bigger audience than just its target. ​There were nearly ​1,000 comments by the time the chief deleted it on Wednesday morning. Some of the comments were abusive, and police officers also got messages about their families, he says.

But what about the $100,000 "street value" ​given to what multiple people say looks like a pile of worthless ditch weed? Karr says he tried to estimate conservatively. He admits he's no expert when it comes to marijuana and doesn't care to be.

"I think the misconception is we go to work to bust pot heads," the chief says. "I personally do not. I know what the problem is — it’s opiates and methamphetamine."​ ​

Still, he says there were a few buds on the plants that may not have been obvious in the pictures posted on Facebook. He says there were also trails out to the field, indicating someone was checking up on the plants. The patch was hidden behind a tree line on another land​ ​owner's property, who is not involved, Karr says.

As far as marijuana, the chief says he really doesn't care if people use it.