Driving With Suspended License Catches Up to St. Louis Alderman 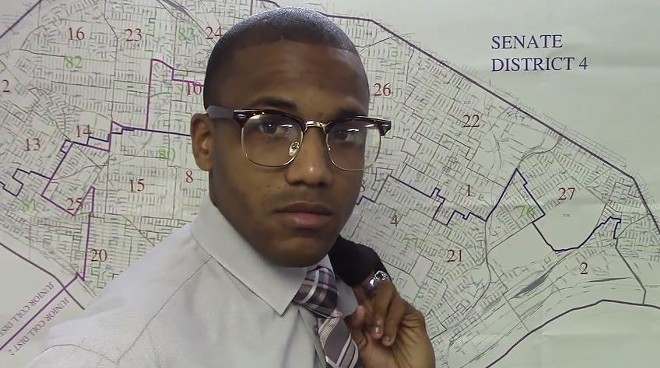 Multiple unresolved traffic tickets — including moving violations and citations for driving with a suspended license — have caught up with Alderman John Collins-Muhammad. And while the 21st Ward Alderman had recently managed to avoid arrest in a St. Louis traffic stop, he wasn't so lucky this past weekend in Jennings.

As first reported by the St. Louis Post Dispatch, Collins-Muhammad was busted for a traffic violation Saturday evening on Lindbergh Boulevard near Cougar Street. But it apparently wasn't the traffic violation that got him arrested. Instead, Collins-Muhammad was the subject of an arrest warrant issued fifteen months ago, in June 2016, in connection to a February ticket for driving without a license and failing to appear in court.

Collins-Muhammad was released early Sunday morning. However, the Post-Dispatch notes that other jurisdictions, including Jefferson City, appear to be eyeing the alderman for past warrants connected to driving with a suspended license.

From the Post-Dispatch story:


As of Monday, Collins-Muhammad had three outstanding unpaid tickets, according to the [Missouri Department of Revenue]: One from Pine Lawn for a speeding ticket issued in April 2011 for traveling 43 mph in a 30 mph zone; another from Ferguson issued in October 2015 for driving while his license was suspended or revoked; and another from St. Louis issued in May 2016 for driving with a suspended or revoked license. In that case, his license had been revoked in November 2014 after a number of moving violations and his failure to appear for court dates.


Last month, RFT was the first to report that St. Louis City police had pulled over Collins-Muhammad on August 14 on Natural Bridge Road. The officer let him go with a warning — despite the fact that the alderman was driving with a suspended license.

Collins-Muhammad, 26, told the RFT at the time that he'd be clearing up the matter. He also said that he believes his traffic woes are a reflection of similar legal struggles encountered by young African Americans who rack up traffic tickets across the profusion of municipal courts in St. Louis County.

"I am my constituents," Collins-Muhammad said last month. "Nothing separates from me from them. Me being able to walk into City Hall doesn't mean anything when I'm on the road."

After Saturday's arrest, Collins-Muhammad lashed out in a public post on his Facebook page, criticizing the Post-Dispatch's coverage and concluding, "In some parts of this region, its illegal to drive while black. Paint your skin & try it!"