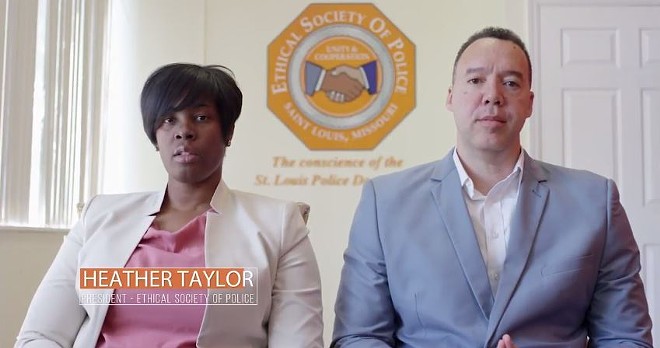 As the wait drags on for a verdict in the murder trial of former St. Louis cop Jason Stockley, a call for conviction is coming from a surprising source: a police union representing what were once Stockley's fellow officers.

The union, the Ethical Society of Police, represents officers of color in the St. Louis Metropolitan Police Department. It has often been sharply critical of the department and its officers — and its video statement released today is no exception.

In the statement, ESOP president Sergeant Heather Taylor cited Stockley's violations of police policy — such as removing his gloves while handling evidence and carrying an unauthorized AK-47 Draco pistol in the field — to support the position reached by the union's board of directors: that Stockley is guilty of murder.

"He wasn't defending himself in the line of duty," said Taylor.

Stockley was arrested in May 2016 and charged with first-degree murder for fatally shooting Anthony Lamar Smith on December 20, 2011. The shooting had followed a high-speed pursuit. Stockley and his partner, Brian Bianchi, both claimed to have seen Smith with a .38 revolver during a confrontation with the 24-year-old in the parking lot of a Church's Chicken, and surveillance video showed Smith attempting to escape the officers in a Buick. Stockley opened fire on the fleeing vehicle, missing Smith.

Stockely and Bianchi then gave chase in a police SUV, and an in-car dashcam recorded Stockley saying something sounding like, "I’m going to kill this this motherfucker, don’t you know it." (That statement is the linchpin in the prosecution's argument that Stockley intended to murder Smith.)

The pursuit ended three miles later, and only fifteen seconds elapsed between the moment Stockley exited the police SUV to the moment he shot Smith five times through the driver's side window. At trial, an FBI firearms analyst testified that one shot was discharged from about six inches away.

Bianchi did not testify during trial, but on the witness stand Stockley insisted that he had acted in self-defense because Smith was reaching for the .38 revolver.

Prosecutors, however, say Stockley actually planted the .38 revolver after shooting Smith. That explosive allegation gains credibility through DNA evidence — only Stockley's DNA was detected on the revolver. The ex-cop's defense attorneys, though, contend that the forensic tests do not rule out Smith possessing the gun.

Along with the video, ESOP's board also published an 21-point list of factors supporting Stockley's conviction, which you can read here. Summaries of the prosecution's and defense's respective arguments, which each side filed after trial's August 9 conclusion, can be found here and here.

It's key to remember that no jury is deliberating over the evidence and conflicting claims. Stockley waived his right to a jury trial, and so the decision comes down to Judge Timothy Wilson, who has remained close-lipped on a timeline for his ruling.

Still, pressure is building. In response to statements by protesters promising "mass disruption" if Stockley is acquitted, city officials erected barricades last month around the police headquarters and courthouses downtown.

The tension around the ruling has crept as high as the office of Missouri Governor Eric Greitens, who made criticism of the response to the 2014 Ferguson protests a cornerstone of his successful gubernatorial campaign. Last week, Greitens indicated that he's willing to call up the National Guard to respond to protests, although he's also said that the rights of peaceful demonstrators deserve protection and respect.

On Monday, however, during a meeting with clergy members, Greitens said that violence and property destruction would not be tolerated.

"For anyone who would come here and try and use a tragedy and the pain of this community for violence and destruction, they should know this: Not on our watch," he said.

Editor's note: A previous version of this story incorrectly stated that Bianchi's statements were entered into evidence. We regret the error.