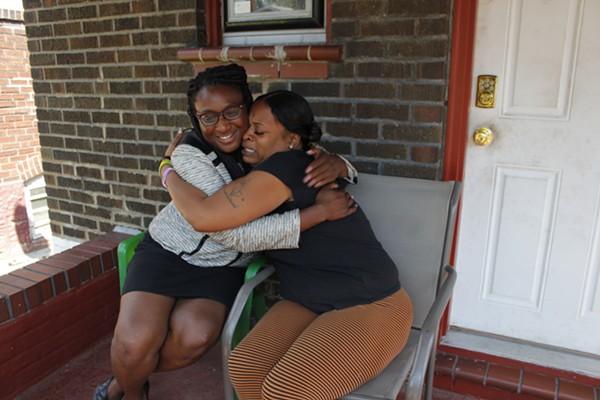 For Rhonda Tunstall, a move to St. Louis this summer became a nightmare — when her landlord illegally locked her out of her home, threw her possessions in the backyard and then pointed a gun at her.

Tunstall moved here with her family from Norfolk, Virginia, in June and found her landlord through word of mouth. But her situation has been a frightening introduction to a problem that some advocates say is all too common in St. Louis: Landlords who don't know, or don't follow, the rules.

It's a problem Alderman Terry Kennedy hopes to prevent with a new bill pending at the city's Board of Aldermen.


Board Bill 87 aims to discourage landlords from illegally locking out tenants they evict. If the bill passes, landlords who block tenants from their possessions or homes without following the rules outlined by law could face fines of $100 to 500, up to 90 days in jail or both.

"I think it's a significant piece of legislation," Kennedy says.

The roots of the problem for Tunstall and her family began at a tax sale in August 2016. That's when Lamont Franks paid $1,000 for the home he later leased to the Tunstalls.

That home is now condemned, but before Tunstall was evicted, she says she lived in a house infested with roaches, termites, lead and mold so severe her son with asthma had to be taken to the hospital.

Tunstall was steadily paying her rent, but she says Franks continued to ask her for more money to make repairs — and then, she says, never made them. When she stopped paying, he filed a notice of eviction in city court.

Tunstall was luckier than many city residents: Kalila Jackson, a staff attorney at Metropolitan St. Louis Equal Housing and Opportunity Council, or EHOC, agreed to take her case. In court on August 10, Tunstall showed her receipts of payment, and the judge agreed she owed Franks nothing. Still, he ruled that Franks had the right to evict her.

Under the law, an eviction becomes final ten days after a judge rules in favor of the landlord. The proper procedure after that time passes is to contact the sheriff's office, says Jackson. A deputy sheriff then prepares and posts a final notice of eviction after the landlord and sheriff's office set a date for eviction.

Ten days after the judge's ruling, all of Tunstall's possessions were thrown into the backyard without additional notice. Franks was changing the apartment locks when Jackson spoke to him on the phone and told him he needed to contact the sheriff's office to handle the eviction legally. 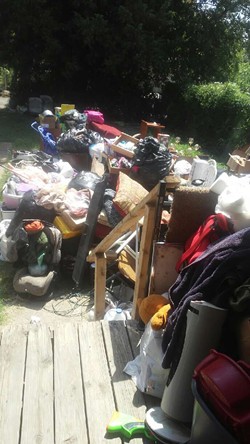 That's when things got really bad.

Tunstall says she was picking up her possessions when she saw a gun pointed at her. Through the bushes lining the fence of the backyard, Tunstall saw Franks and at least one more person in a car.

At first she thought maybe she was imagining things, but then, she alleges, Franks pointed the gun in the air and fired it.

"I thought, maybe it's not [a gun]," she recalls. "Then I kept walking and turned again and it was a gun, pointed, boom. You see the fire coming out of the trees and the trees coming down. They drove off down the street."

Franks has now been charged with unlawful use of a weapon. (The charge is pending in St. Louis City Circuit Court.)

His attorney, Terence Niehoff, denies that Franks threw Tunstall's belongings in the yard and pointed a gun at her. Tunstall, he claims, threw her own possessions outside to get money from Franks and see him prosecuted.

For EHOC's Jackson, however, landlords throwing their tenants into the streets or otherwise violating the law in illegal evictions is something her organization sees all too often. (The RFT recently reported on a case involving a landlord who locked out a young couple — with their baby trapped inside.)

"In certain communities this happens," Jackson says. "There are landlords who build their reputation on pulling kicked doors on tenants who don't pay them their rent. We don't talk about those people because they tend to only operate in low-income minority communities that are invisible to large segments of the population."

EHOC has been working with Kennedy for the last year on Board Bill 87, an ordinance cracking down on illegal evictions. Kennedy introduced the bill in June.

"I've seen some evicted in ways that I thought were illegal," Kennedy says. "Much of the remedy became them finding their own legal counsel in those particular areas. I've seen twenty instances through the past five years where you could say they followed the laws and statutes, but the protection was not as clear or strong as it could be."

Not even members of the sheriff's office seem to understand the full requirements of the law, Jackson says. At Tunstall's home, she says, a sergeant seemed ready to assist her landlord in forcing her out.


"Sergeant [Neil] Hogan said because of the court's order, he was required to do this expedited eviction," Jackson says. "If it were not for the intervention of the St. Louis city police department, who intervened on Rhonda's behalf, this situation would have gone much differently. Basically she would have been evicted."

Sheriff Vernon Betts, however, disputes that. He says he dispatched the sergeant to check out the property, but that Hogan did not go there to evict anyone. Then, Betts says, Franks told the officer that Tunstall had been shooting at Franks.

Jackson and Tunstall say the officer attempted to evict Tunstall immediately, but gave her another week when St. Louis police intervened and confirmed that Tunstall was not the problem.

"With illegal lockouts, there is no database — there is no way to track that information," Jackson says. "But so many other people, police officers come and people are maybe told this is a civil matter, and the police don't get involved. So locks are changed, people are set out, families are literally torn apart instantaneously and there's not a clear process or protocol in the city of St. Louis and the St. Louis region for how police officers should handle those situations. Unless you have a department that is proactive, or you have an officer that is conscientious, the outcomes vary wildly."

"Mr. Franks has not been convicted of anything, but this is now a very serious situation and he's being charged with a felony," Jackson says. "So his life is now on the line here too and it just didn't need to happen like this. This didn't have to happen and I don't know if education or some information might have changed the circumstance, but we need to do better."