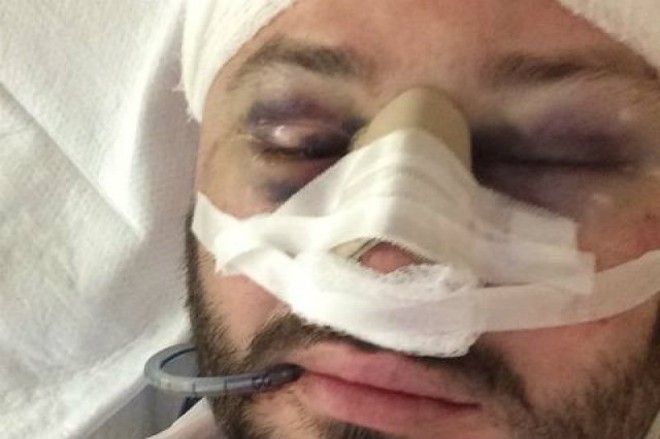 A twenty-year-old who lives in University City, Justin David Hood, has been charged with first-degree assault for the attempted robbery and attack of a Delmar Loop bartender on August 23, according to the St. Louis Post-Dispatch.

The man, Jimmy Muckle, was attacked while he walked to work in broad daylight, according to KSDK. Muckle, a bartender at Three Kings Public House, told KSDK he was "lucky to be alive."

Muckle said he was "listening to music in my headphones, playing with my phone, not paying attention, and out of nowhere knocked to the ground and kind of bludgeoned my face area."

The attackers approached the victim in the 7000 block of Stanford Avenue, which is just a few blocks north of Delmar and west of the Loop. Muckle told police that he was attacked from behind around 6:30 p.m., pushed to the ground and hit several times while the attackers ordered him to hand over his property. They ran off after Muckle that he didn't have anything to give them.

Hood, 20, was identified as a suspect and charged on August 27, with bail set at $100,000. Police say Hood lives in the 7100 block of Dartmouth Avenue, which the Post-Dispatch notes is only a few block from the location of the attack.

Hood previously pleaded guilty to felony tampering with a motor vehicle. Court records show he previously had his probation suspended a few times after allegedly violating its terms.

A GoFundMe page has been created to help Muckle with medical bills. Muckle has undergone several surgeries as a result of the attack and will be missing weeks of work, the campaign reports. Three Kings Public House also has a fundraiser scheduled at its Loop location on September 11 from 4 p.m. to midnight, with all proceeds from draft beer purchases benefiting Muckle.

"Jimmy is the type of person who would help anyone out and always lends an ear," the GoFundMe summary says. "Any donation would be helpful for Jimmy."