The controversy erupted at 11:41 a.m. Sunday, in the middle of Labor Day weekend. Dillon Scott, a senior at the Mary Institute and St. Louis Country Day School, sent out a short, plaintive tweet to his school, a prestigious prep school known as MICDS.

It took the school less than three hours to respond. "School leadership is aware of the situation," someone tweeted from the official MICDS account that Sunday afternoon. "You can trust that they will review it carefully and take appropriate disciplinary action."

"The situation" was contained in screen shots of Snapchat messages, which Scott attached to his tweet. In them, a group of female students at the pricey private school freely use the n-word — and, in one case, seem to excoriate a fellow student who objects. "It's not cool to make us look like bitches," wrote one girl, who in the earlier messages was easily bandying about the racial slur.

By press time, the tweet and its graphic attachments had been retweeted nearly 350 times, with more than 600 "likes."

The conversation begins with one student saying, "Time for this n——er to showe [sic]."

The student who apparently took screen shots of the conversation replied, "Don't say the N word."

And from there it was off.

Warning: Graphic language is included below. Some readers may want to stop reading or skim over the attachments.

The RFT has deleted the last names of the students because they are minors, although those names were clearly identifiable in the screenshots shared by Scott.

Later, one of the girls who seemingly reveled in using the racially offensive word appears to try to reason with the student who objected in a one-on-one Snapchat conversation. The two appear to be discussing the previous messages. 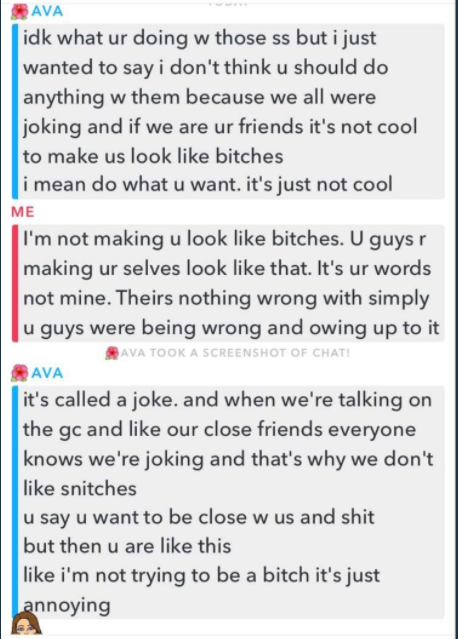 "It's called a joke," the girl who used the racial slur writes. "... Everyone knows we're joking and that's why we don't like snitches."

By Monday, the incident was a story in the St. Louis Post-Dispatch. The daily reports that the school was planning an all-school assembly for this morning to address the incident.

The head of school, Lisa Lyle, told the paper yesterday that the messages are "clearly inconsistent" with the school's mission and values:


As Head of School at MICDS, allow me to be the first to say that I am both broken-hearted and deeply offended by the acts of these few students, which have profoundly impacted members of our community and beyond. These inflammatory postings are clearly inconsistent with the MICDS mission and our community’s values. We cannot and do not condone or tolerate racial slurs or hate speech.


As for Scott, he told the paper that he "couldn't leave my voice unheard" after seeing the hateful messages.

“I felt like certain people still look at me as a joke, as if we didn’t put in the effort or have the same capabilities to be in the same place that they are in,” Scott told the daily. “It basically represented us in one type of way.”

This is why I will always continue to support my school, thank you. https://t.co/S37a0mclqS