On Stockley Verdict, Anthony Smith's Mother Asks, 'Why Is It Taking So Long?' 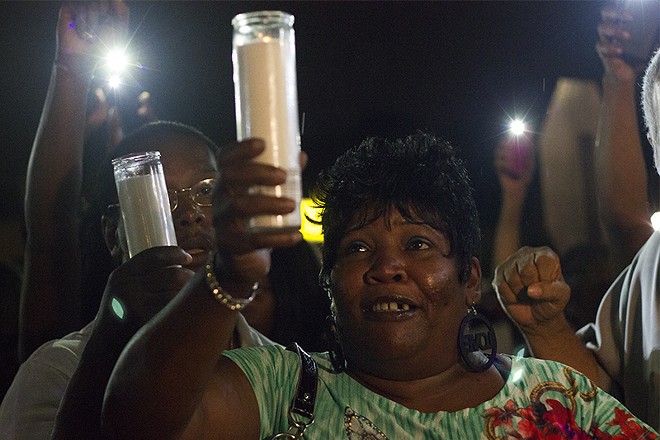 As rain began to fall on the corner of West Florissant and Acme avenues Monday night, Annie Smith asked the question on everyone's mind.

"Why is it taking so long for the verdict?"

Surrounded by activists and family members, Smith echoed the mounting tension felt in St. Louis over the case of former city police officer Jason Stockley, who is accused of murdering Smith's son more than five years ago. Last night's vigil was held at the same intersection where Stockley shot and killed Anthony Lamar Smith following a high-speed pursuit on December 20, 2011.

Prosecutors charged Stockley last year with first-degree murder, citing video and forensic evidence to support claims that the cop had "executed" a drug suspect in cold blood and then planted a gun on him to cover up the crime. Stockley denies planting the gun and maintains he acted out of self-defense.

Stockley previously waived his right to a jury trial, leaving the final decision to a single judge. Although the trial's arguments concluded August 9, St. Louis Circuit Judge Timothy Wilson has yet to deliver a verdict. There's no telling when he might do so.

In the meantime, Smith and her family members have repeatedly called for Stockley's conviction. Last week, she joined joined more than 40 protesters and clergy on the steps of the Carnahan Courthouse in downtown St. Louis to demand justice for her son.

Some protesters have promised that the city will face "mass disruption" if Stockley is acquitted. Seemingly in response to the threat, city officials quickly erected barricades around police headquarters and courthouses.

"I'm not at peace. I'm mad as hell," Smith said at the vigil. Her anger, she added, had nothing to with money, though she and other relatives were awarded a $900,000 civil settlement in 2013, more than two years before Stockley was criminally charged.

"It ain't enough money or gold they could give me, because he wasn't for sale," Smith said. She wants the officers involved with her son's death to face justice. "I want all of them accounted and arrested, and they can rot in hell."