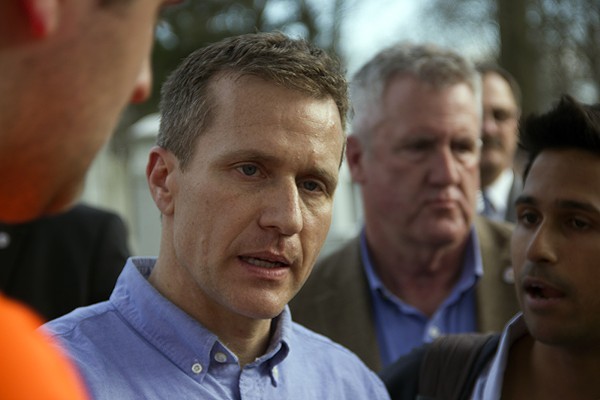 Here's a little advice for all the political parties out there: If you've gone out of your way to block a minimum wage increase — literally working overtime to reverse the pay hike that's already gone into effect — best not to call attention to that fact by tweeting, "It's time to give the American worker a pay raise!" It makes the snarky replies all too easy.

And while that advice seems obvious, let's remember where we are. We're talking about the Missouri GOP, the same party that tweeted, "Way to go, @RealDonaldTrump" when the president was equating neo-Nazis with other protesters — sending politicians across the land scrambling to distance themselves. Is anyone really surprised this crew stepped in it?

Indeed, the tweet went viral in recent days, and not in a "way to go, let me retweet that shit" kind of way. Instead, outlets across the land used the tweet to call attention to the fact that the party forced through a state bill pr eempting St. Louis' minimum wage increase, and then Governor Eric Greitens let the bill become law even after the increase had gone into effect. (Again, the optics on this thing!)

1/3 Great job in Springfield, @POTUS! You are right—it’s time to give the American worker a pay raise!


The commentary that followed was way harsh.

Ummmmmm pretty sure your party just took away a pay raise from St. Louis families & their kids #MoLeg https://t.co/hFOmVryekm

Even the national media got in on the mockery, including the Washington Post's Dave Weigel.


And if you want to talk about "way to go/here I am retweeting you" viral, the DNC chairman's tweet mocking our little local party earned 3,490 retweets and 6,000 "likes" as of press time — with that number still rising.

This is pretty rich coming from a party who worked to lower wages by $2.30/hour in Missouri this week. Ridiculous. https://t.co/Fk2iuO3aKL

So hey, Missouri GOP! If the point of social media is to get people talking, you're doing awesome.

If the point is to win hearts and minds to your policies, well — actually, who needs that? Ripping a minimum wage increase out of the hands of the working poor is the kind of obvious gimmick that sells itself. Who needs smooth strategy when your policies are so perfectly designed to win over the masses?