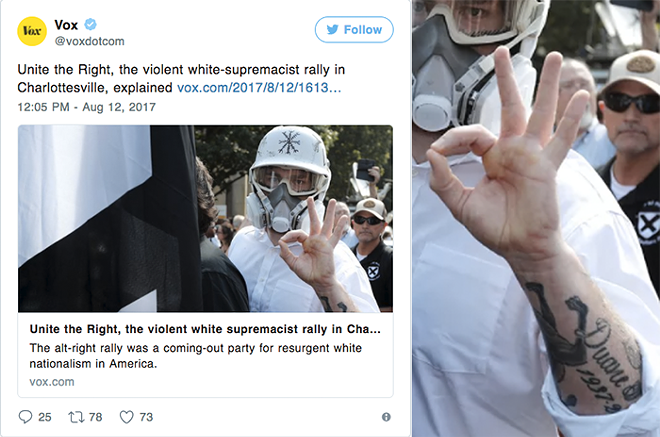 A personal trainer has been fired from a south St. Louis gym after clients and fellow trainers spotted him in photos of white supremacists marching in Charlottesville two weeks ago.

Bobby Ritter, wearing a white helmet, stares straight into the camera in an image that was used as the lead photo in a Vox.com story: "Unite the Right, the violent white supremacist rally in Charlottesville, explained." The fitness instructor is not identified by name in the story, and part of his face is obscured by a gas mask. But a telltale tattoo on his raised forearm gives him away.


It was not long before appalled members and co-workers at the Lab Gym began sharing the image, as well as another photo showing a white-helmeted protester shouting in the midst of a crowd of Tiki-torch carrying marchers.

Gym owner Justin Thacker declined to comment when contacted by the Riverfront Times, but he told clients in an email that Ritter had been terminated.

"After careful consideration, the Lab Gym has severed working relations with Bobby Ritter," Thacker wrote. "There has been questions, concerns, and some evidence to part ways based on differences concerning important core principles that are innate to the Lab Gym and it’s mission."

Ritter, who moved to the St. Louis metro area after attending Washington State University, taught a course called "Heavy Metal CrossFit," although CrossFit's general counsel says he is not a licensed CrossFit trainer and he does not appear in CrossFit's official trainer directory. He was known around the gym as a vocal Trump supporter, people associated with the gym told the RFT. He has since gone quiet, shutting down his Facebook, Twitter, Instagram and LinkedIn accounts. His phone number is also unlisted, and the RFT has been unable to reach him for comment. (We will update the story if we hear from him.)

In a cached version of his now-dark Twitter account, a younger Ritter is shown pressing a barbell overhead. The tattoo, prominently displayed in the Vox story, is clearly visible.

Ritter is the latest person from St. Louis to come under fire after being identified from images taken around the Charlottesville march, which drew white supremacists from around the nation. They gathered in Virginia to oppose removal of a statue of Confederate general Robert E. Lee. Marchers clashed throughout the weekend with counter-protesters, leading up to the terrifying moment when a 20-year-old marcher drove a Dodge Challenger into a crowd of anti-racists, killing 32-year-old Heather Heyer.

Ladue Horton Watkins High School grad Clark Canepa was filmed in a Vice video chanting "You will not replace us!" He posted an Instagram photo of himself, smiling in the center of three young men and a young woman. The location tag was Charlottesville, and the 21-year-old wrote in the caption, "It was a weekend for the books with the St. Louis goys."

Canepa later told KMOV he had a "fantastic time" at the march.

One of the other people in Canepa's post, Zach Morley, was later identified by St. Louis University High graduates as one of their own. He is now a student at Saint Louis University.

Morley told the RFT in an email he was the victim of an ideological witch hunt and compared his plight to Jesus Christ, Joan of Arc and Oscar Romero, the social-justice-minded Archbishop of San Salvador who was assassinated after giving a sermon.

Editor's note: A previous version of this story failed to fully elucidate Bobby Ritter's relationship with CrossFit. While Ritter taught a course with CrossFit in its title, he is not licensed by CrossFit's Core Credentials program. We regret any implication to the contrary.