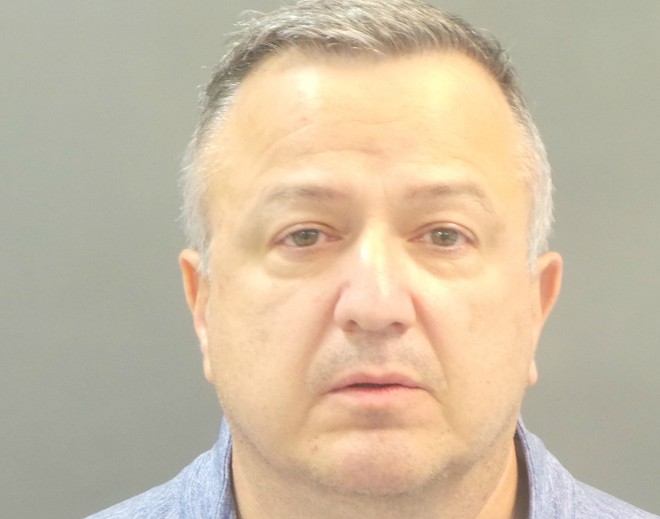 A driver who plowed through people marching in memory of Kenneth "Kiwi" Herring in the Grove has been charged with resisting arrest, leaving the scene of an accident and operating a motor vehicle in a careless manner.

Mark Colao, 59, steered his black Mercedes around three other cars that had stopped for protesters who were blocking the intersection of Sarah Street and Manchester Avenue, a video released by police shows. Colao accelerated and then hit the brakes as he reached the edge of the crowd.

Police said in a statement on Wednesday night that demonstrators began pounding on Colao's car with their hands and a flag pole. Several kicked the Mercedes and climbed on the hood, police say. That appears to match what's shown in the video, an overhead view of the scene. After a few moments, the video shows, the Mercedes surges forward, sending people tumbling into the street before speeding off around the corner.

Protesters have contested parts of the police narrative, saying Colao was the aggressor. They describe him honking and flipping them off with both hand before he drove through the crowd. He initiated the confrontation, demonstrators say. Three people hit by the Mercedes suffered minor injuries and refused to medical attention.

Colao, who lives in the Gate neighborhood, was stopped about a block away and taken into custody by the officers, police say.

Demonstrators had begun the evening at the Transgender Memorial Garden with a candlelight vigil for Herring, a transgender woman who died Tuesday morning in a violent confrontation with police. Authorities say they were called to her apartment in the Academy neighborhood and found a 30-year-old man, whom Herring had slashed and stabbed in the face, arms and torso. Still armed with a large kitchen knife, Herring then attacked police, slashing one across the arm before the two officers in the apartment opened fire, interim police Chief Lawrence O'Toole said on Wednesday.

Herring, 30, was killed, and her spouse, 28-year-old Kristy Thompson, was charged with assault for allegedly participating in the initial attack on the 30-year-old, police say.

Pictures of Colao with Mayor Lyda Krewson began circulating shortly after Wednesday's hit and run, leading to theories he was being protected. Krewson responded with a string of tweets, saying she doesn't know Colao and condemned his actions.

I don't know person in the photo- I take pics w/ a lot of people- Police are applying for felony charges- that's the right call!

"Driving into people is totally wrong," Krewson wrote. "People have a right to protest, he should have used common sense and turned around."

Wednesday night's demonstration in the Grove was the second protest, following a march on Tuesday in the Central West End that temporarily closed the intersection of Maryland and Euclid.
We welcome tips and feedback. Email the author at [email protected] or follow on Twitter at @DoyleMurphy.