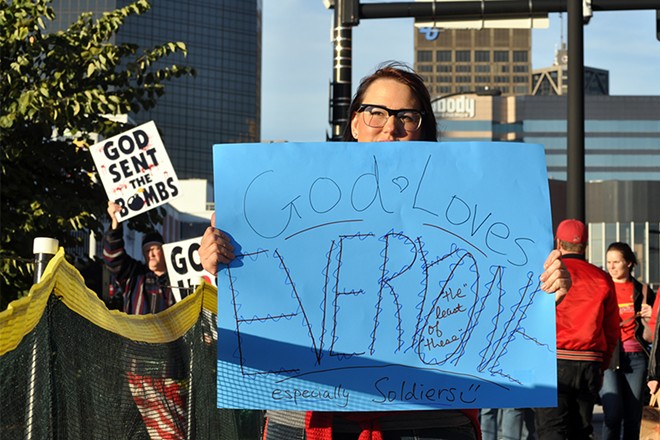 As if the proliferation of upper-class white nationalists and boo-hooing neo-nazis in the U.S. these days wasn't bad enough, the Westboro Baptist Church is still lurching around the country to peddle its noxious message of damnation to us sinners and sodomites. On Friday, the protest tour lands in St. Louis — just in time for the Cardinals' first-ever Pride Night.

Counter-protests are already being planned to confront the notoriously anti-gay, anti-everybody religious group. Westboro protests usually feature a few douchebags carrying signs rejecting "sodomites" and praising the death of U.S. troops, among other awful tropes. If experience is any guide, they'll probably be playing bad pop song parodies, too.

According to Westboro's press releases, members plan to stage two protests on Friday, the first being scheduled for Fort Zumwalt West High School in O'Fallon at 2 p.m. Why a high school? The church's members, who clearly don't give a shit as long as they can be hateful jerks in public, apparently have a problem with the school's "free, healthy breakfast" ... because what the kids really need more of is the word of Jesus. That's it. That's the sole explanation.

The Topeka-based hate group plans to bring its protest to Busch Stadium at 5:30 p.m. — because unsurprisingly they're also not too thrilled with the Cardinals' inaugural Pride Night. The event was announced in the wake of outrage over the team's invitation of former Cardinal Lance Berkman, an outspoken opponent of LGBT rights, to its "Christian Day" on July 30.

Now, given the fact that the Westboro Baptist Church loves to play the troll, a separate press release did mention Berkman — and glowingly, at that. "The Cardinals should have vocally defended the obvious truth of the words that Lance Berkman spoke," the release states.

To summarize: The Westboro Baptist Church is a small, creepy collection of religious meme-factory cringelords who believe pretty much everyone is depraved and going to hell. You can oppose them through direct protest or supporting pretty much any other organization that does good in the world.

Alternatively, and arguably most effectively, you can make a weird sex video deny the jerks their satisfaction by just walking away.