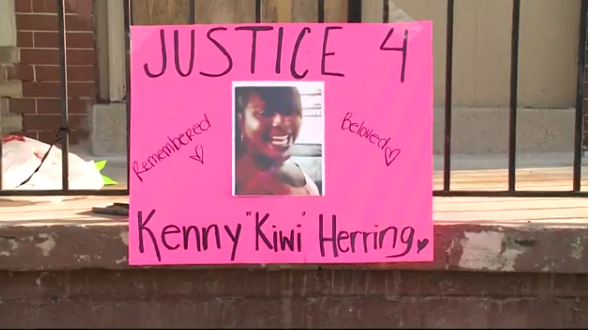 A transgender woman was killed by St. Louis police after cutting one person and then slashing one of the police officers who responded yesterday to her apartment north of downtown, authorities say.

Police described the dead suspect as a 30-year-old black man, but friends at a vigil last night told reporters that Kenneth "Kiwi" Herring identified as a woman. Two officers confronted Herring inside a two-family flat in the city's Academy neighborhood following an 8 a.m. report of a domestic dispute.

When police arrived they found a 30-year-old man who had been badly cut across his face, arms and torso, authorities say. Interim police Chief Lawrence O'Toole told reporters that Herring was armed with a large kitchen knife and swung at officers, wounding one before both officers opened fire.

"The suspect flourished a knife and slashed at the officers, slicing one officer on the arm," O'Toole said at a news conference. "The officers fired and shot and killed the suspect."

The wounded officer was treated for a cut on the arm and released from the hospital shortly after. Both officers who shot Herring have been placed on administrative leave pending an investigation, which is standard protocol.

The deadly confrontation led to a vigil outside the apartment last night, and protesters later marched in the Central West End, temporarily blocking Maryland and Euclid.

O'Toole said police had responded to several calls for "domestic issues" at the apartment in the past year. He said they were also looking into a possible connection to a call for a fire early yesterday morning.

However, St. Louis Fire Department spokesman Garon Mosby told the St. Louis Post-Dispatch the call was for charcoal that had spilled out of a barbecue pit onto porches on the first and second floors. There wasn't any indication of a disturbance so firefighters didn't call police, Mosby said.

A second person, 28-year-old Kristy Thompson, was arrested yesterday morning at the apartment and charged with first-degree assault and armed criminal action. Police say she was involved in the attack on the cutting victim.

Herring's sister-in-law told the Post-Dispatch that Thompson was Herring's spouse and was also transgender. They had moved to St. Louis from Mississippi, and felt like they were being harassed by neighbors, according to the sister-in-law. She said the couple was raising three boys, ages eight and younger. O'Toole said a toddler was home at the time of the fatal confrontation.

A police spokeswoman told KSDK that police have been describing Herring as a man following the preliminary investigation, which included looking at the gender on her driver's license. The department could revise its classification as the investigation progresses, the spokeswoman said.

See a video of last night's protest below:


Editor's note: The story was updated with the name and charges of the second suspect in the stabbing.