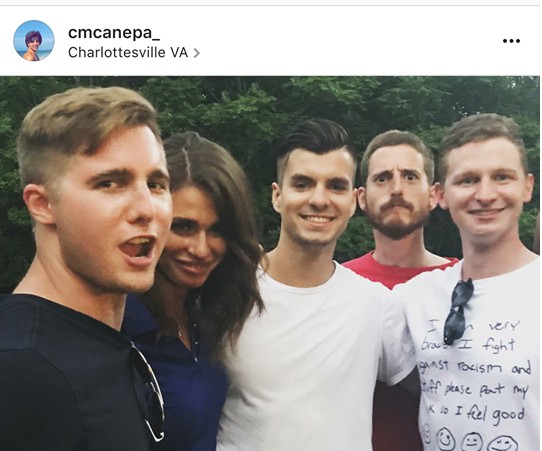 After Ladue's Clark Canepa was filmed marching alongside torch-carrying white supremacists in Charlottesville, appalled anti-racists began circulating a picture from his Instagram page.

The photo shows the unrepentant 21-year-old grinning with his arms around a small bunch of friends.

"It was a weekend for the books with the St. Louis goys," Canepa wrote in the caption, "goy" being a Yiddish word for non Jews. The location tag was Charlottesville, Virginia, the scene of a violent and ultimately deadly clash between white supremacists, including neo-Nazis, and counter protesters.

While Canepa, who told KMOV he had a "fantastic time" at the march, has drawn most of the attention, St. Louis University High grads focused on another person in the Instagram photo. Zach Morley, a 2015 graduate of the Jesuit Catholic prep school, is at the far left of the frame. (The post was later removed, and Canepa has locked down his Instagram.) Multiple former classmates of Morley contacted the Riverfront Times last week to identify the 21-year-old, who is now a junior at Saint Louis University studying business, according to a university directory.

"This doesn't represent SLUH as an institution," one former high school classmate told the RFT after outing Morley.

Another sent screen grabs of bigoted posts Morley shared on his Facebook page, including a picture of a somber-looking old man sitting between two children, who appear to be of a different race. "when u realize what u fought for in WW2," reads the caption.

Another post, from July 20, comments on a story titled, "China has an irrational fear of a 'black invasion' bringing drugs, crime and interracial marriage." The post says, "Weird. Why would they think such a thing?"

The RFT contacted Morley at his university email account and through Facebook on Friday. He later shut down the Facebook page, but he responded on email, describing himself as the victim of an "ideological witch hunt."

"My appearance in a photo with someone who may or may not have been at the rally says nothing about my opinions whatsoever," he writes.

Morley then threatened to file a lawsuit.

"If you insinuate that I hate anyone on account of their race or sympathize with neo nazis (of which there is zero evidence) you will be sued for defamation," Morley writes. "You personally will be sued and your company will be sued."

We then asked Morley to further explain his opinions and clear up any confusion. Here is his response, in its entirety:

It's very saddening that we live in such a rabidly divisive society where self-proclaimed "liberals" are in reality so desperate and closed minded so as to engage in violence, defamation, and lies against those like myself trying to foster dialogue of diverse ideas. Character slurs such as "racist" and "neo-Nazi" are last ditch attempts from a perishing ideology of global secular humanism.

Christ was crucified. Joan of Arc burned. Oscar Romero shot. All by their own countrymen for crimes they did not commit. Today they are remembered as heroes. Thankfully my Jesuit education has taught me to deal with the blows just like them. The guilt is on my persecutors.


We asked him to give us some specifics about those ideas and how he tries to "foster dialogue." We also wanted to know about his perspective on Charlottesville and asked for examples of the persecution he claims to be facing, but Morley didn't respond further.

Representatives of the Jesuit high school and university, where Morley says he learned to deflect crucifixion-level attacks, released statements that generally condemned the racism on display in Charlottesville but didn't specifically mention Morley.

At Saint Louis University, we seek to foster an inclusive campus environment where people from all walks of life are welcomed and respected. The bigotry on display in Charlottesville, Virginia, brought shudders to American households and to our campus. With the Catholic Bishops of the United States, we “stand against the evil of racism, white supremacy and neo-Nazism." Such loathing, degradation and false primacy are diametrically opposed to Saint Louis University’s Catholic, Jesuit values. The University condemns the propagation of hate, acts of oppression and dehumanizing of our neighbors. White supremacist, anti-Semitic and racist movements have no place in our world.


And this is the statement from St. Louis University High:

As a Jesuit Catholic School, St. Louis University High School is part of the larger mission of the Catholic Church and that of the Society of Jesus in the United States. We profess that all people are made in the image and likeness of God. We value and teach the dignity of every human person from natural conception to natural death, and, therefore, we abhor racism, violence and the death of innocent people. We continue to pray for all those in need of spiritual healing and for the consolation of all harmed by injustice. We are committed to forming our students in accordance with our Jesuit Catholic mission as a response to the brokenness of our humanity and in the hope of human solidarity as magnified in Christ.