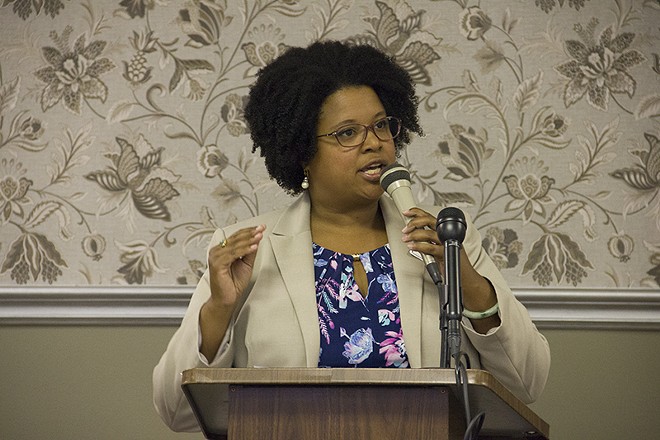 After three days of public backlash and criticism from her fellow lawmakers, state Senator Maria Chappelle-Nadal (D-University City) offered a public apology to Donald Trump this afternoon at a press conference in a Ferguson church.

Last week, a screenshot of Chappelle-Nadal's deleted Facebook comment reading, "I hope Trump is assassinated!" drew national coverage and calls for her resignation, including from Governor Eric Greitens. The comment also attracted the attention of the Secret Service.

Backed by a crowd of supporters, Chappelle-Nadal did not announce her resignation — but did apologize to Trump, his family and her colleagues, who have almost uniformly denounced her and suggested she should resign. Lt. Governor Mike Parson has even said he can (and will) expel her from the Senate if she doesn't resign before September 15.

"I want to apologize to you and your family," said Chappelle-Nadal, addressing Trump by name. "I also apologize to all of the people in Missouri, and also I apologize to my colleagues in the Missouri legislature for the mistake that I made."

In a speech laced with religious symbolism and references to being a "child of God," Chappelle-Nadal avoided making any mention of the actual content of the Facebook post that sparked the recent controversy.

"I'm reminded about that we are all human beings and none of us are perfect," she said at one point.

After the apology, however, Chappelle-Nadal added a defiant note to her speech.

"I will continue to fight for issues that are really important," she said. She referenced her efforts to help residents living near radioactive waste as "the calling that God gave me."

Chappelle-Nadal continued, "God chooses people for different things, to send different messages. I made a mistake, and I'm owning up to it, and I'm not ever going to to make a mistake like that again. I have learned my lesson. My judge and my jury is my lord Jesus Christ."

With that, the State Senator walked away from the podium. She took no questions.

It would take a two-thirds vote to expel the senator, a move that even the lieutenant governor has acknowledged would be unprecedented.

But Chappelle-Nadal has previously clashed with numerous colleagues, including her fellow Democrats. Among other things, she's been accused of threatening one at a Li'l Wayne concert and accused another of inappropriate and unwanted touching.

You can watch the entire speech here, courtesy of the Clayton Times.