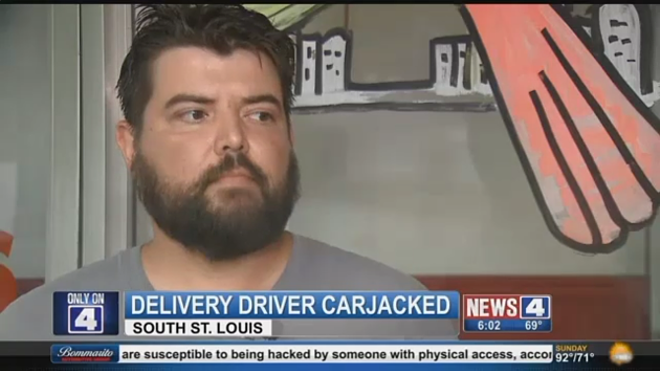 Some exceptionally stupid criminals robbed an Imo's Pizza delivery driver at gunpoint this week, stealing the food he was delivering, completely failing to operate his car's manual transmission and forgetting to demand any money.

As first reported by KMOV, south city delivery driver Jon Miller was approached Tuesday on Nebraska Avenue near Arsenal Street by the three very dumb thieves, who flashed a gun and demanded pizza and car keys, neglecting to consider that Miller had his night's earnings in his pocket.

Instead, they took Miller's car. One problem, though: None of them knew how to drive a stick shift.

The thieves then drove away, but they didn't get far.

"It ended up six blocks away, all blown up," Miller reports.

Police say they are currently investigating a string of recent delivery driver robberies in south St. Louis. On August 8, a man delivering Chinese food in Tower Grove South was shot in the leg after a brief scuffle when two thieves approached him with a gun. KSDK reported that it was the second such incident that week alone.

For Miller's part, he's not going to let three morons who don't know how to successfully drive or thieve stop him from doing his job. He says he will continue delivering pizzas as soon as his car is repaired.