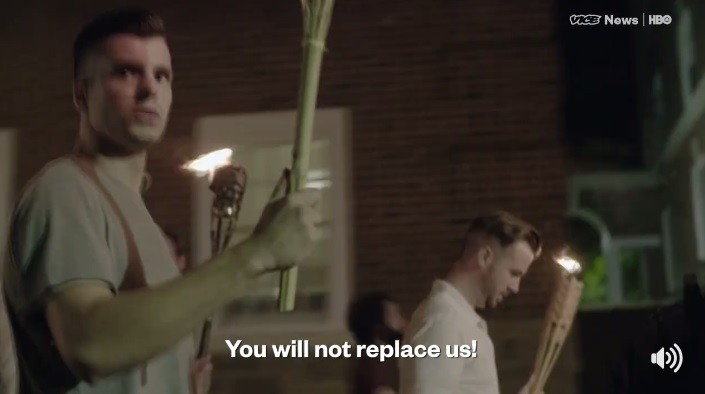 One of the "very fine people" who joined the crowds of neo-Nazis and white supremacists in Charlottesville, Virginia was a St. Louis man.

Clark Canepa, who is undoubtedly pissed about the oppression he endured as a lacrosse player at Ladue Horton Watkins High School, was recorded in a Vice News video as he marched and chanted "You will not replace us!" He pops up about eighteen seconds in.


Bigots from a wide variety of hate groups stomped around Charlottesville and fought with anti-racist protesters through the weekend, drawn by the university town's plans to remove a statue of Confederate General Robert E. Lee.

Canepa and his friends paraded through the night with their Tiki torches and matching haircuts, and he couldn't be prouder.

"It was a fantastic time," he told KMOV reporter Alexis Zotos in a social media message. "Unfortunately, the left wing violence wasn't prevented by the police. They used this as excuse to shut down our rally, turning into a chaotic event!"

It's not clear from his correspondence with Zotos how the death of 32-year-old Heather Heyer, an anti-racist protester who was in a crowd of people rammed by one of Canepa's fellow marchers, played into the "left wing violence," but the 2014 Ladue grad doesn't seem too conflicted about it.

Canepa tells Zotos he's part of Identity Evropa.  He says they're not white nationalists — but they absolutely are, according to the Southern Law Poverty Center, which studies hate groups.

Canepa's Instagram account is now set to private. Also locked down or removed is his LinkedIn account, where he was listed as an assistant property manager for Canepa Properties LLC, a company registered to his father, prominent local businessman Christopher Canepa.

But while Canepa was busy shouting about "blood and soil," his sister doesn't seem too happy about what he's doing to the family name.

"All I can do is apologize for my brother's actions," the sister wrote on Facebook, according to KMOV. "I do not condone them under any circumstances."

Editor's note: This story was updated a few minutes after publication. The previous version wrongly described the chant being uttered while Canepa was shown on camera. It was "you will not replace us." Later in the video, but not during that moment, the marchers shouted, "Jews will not replace us." We regret the error.