Used as a Bait Dog and Abandoned in North City, Buster Is Now on the Mend 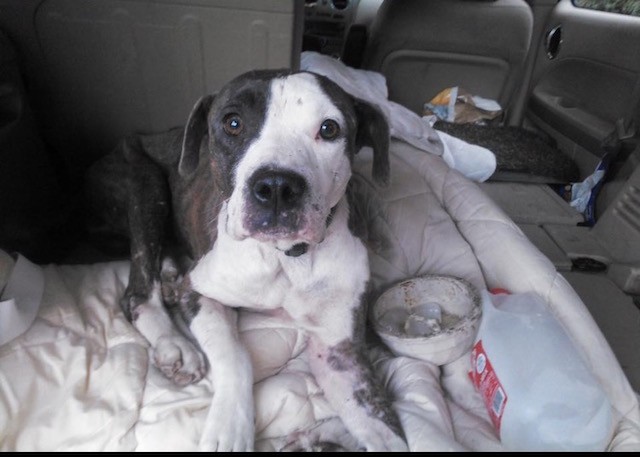 When volunteers first saw Buster, the pit mix who had been found near death in north St. Louis, it was impossible to tell how old he was. Several of his front teeth were missing, his leg appeared broken and he was covered with gashes and scars. Mandy Ryan, who runs the rescue group that Buster had been turned over to, assumed he must be a very old dog.

But the truth was quite different — and horrifying. A veterinarian concluded that his remaining teeth, the ones in the back, were in great shape. The front ones must have been pulled. Poor Buster was likely just three years old, the apparent victim of use as a "bait dog" in the illegal dog fighting rings that continue to plague the city.

For Ryan and Missouri K9 Friends, the non-profit foster-based rescue group of which she serves as president, Buster's discovery is another sad story in a city that can be full of them. "I think he was left to die, or was confined somewhere," she says. "He came out, and that saved his life."

A good samaritan spotted the emaciated dog at Margarita and Kossuth, coaxed him into his car and named him Buster. That's when his fortune began to change.

Ryan's group took Buster to VSS, the emergency veterinary clinic in Ballwin. He has a terrible case of heartworm — so bad that it needs time to heal before they can even think of treating his broken leg. "He can't be put under anesthesia with his heartworm issue," Ryan says. While he's being treated, though, he's being dosed with pain meds and putting on weight.

"He's got a very sweet temperament," she reports. "You can tell that under all these problems, there's a really good dog under there."

Buster has a foster family all lined up, but if you'd like to contribute to his care, there's a crowd-funding campaign already set up.