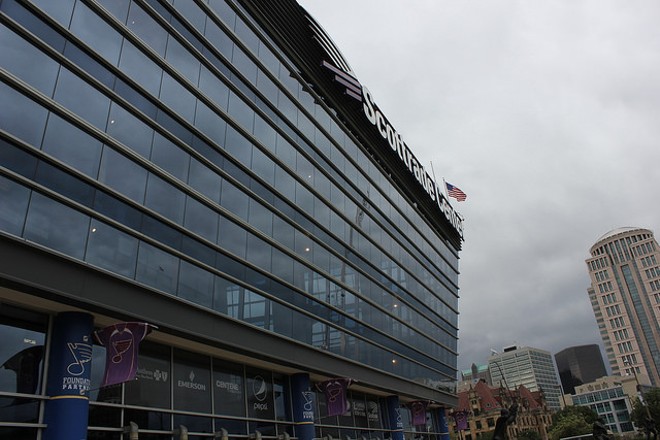 Update: The story has been updated to include statements from the city counselor and city Comptroller Darlene Green.

The St. Louis Blues owners can't renovate the Scottrade Center with taxpayers' money, because that would violate the state constitution, a new lawsuit argues.

The $64 million project was approved by the city's Board of Aldermen in February. Work has already begun, but the lawsuit claims the aldermen voted for the deal under the false premise that the city owns the arena and is responsible for its upkeep.

"That's false," says Alderwoman Cara Spencer, who brought the suit along with former City Counselor James Wilson and former state Rep. Jeanette Oxford. "The city doesn't own the building. We own the land."

According to the suit, the city retains only "bare title" to the property, which essentially gives it zero control for the site during the 50-year life of the agreement. The Blues parent company pays $1 in annual rent and zero property taxes, even as it collects the profits. But it also takes on responsibility for maintaining the building, including renovations, the suit says.

The lease, signed in 1992, makes that part "very, very clear," Spencer says. But that critical bit of information wasn't clear to aldermen who were debating the project earlier this year, she says. That's because they did not have a copy of the lease.

Spencer says she and others have tried to get the document for months, even filing an open records request that has yet to be fulfilled. They were eventually able to get copies through an undisclosed source, she says.

"When I finally got my hands on the lease, I was disgusted," Spencer says.

The lawsuit points to a portion of the agreement saying the Blues owners are responsible for "all sums for maintenance, repair and replacement of improvements... "

The city signed the deal in 1992 in part to rid itself of the $800,000 it was paying annually to maintain the crumbling Kiel Auditorium. It was considered a financial benefit to taxpayers back then, but opponents of the latest agreement to fund the renovation say the $64 million in bonds pledged by the city would only benefit the owners of the Blues.

And that's a violation of a provision of the state constitution that bans the use of public money to enrich private entities, the suit alleges.

"The situation is akin to that of a woman who owns land, who leases full use of her land to a family for 50 years, retaining only bare legal title," according to the suit. "The family builds a big house, then halfway through the lease complains that she should buy them a big-screen TV and swimming pool for their house simply because she is the 'owner.'"

Including interest, the 30-year bonds would ultimately cost the city nearly $106 million. So far, city Comptroller Darlene Green has refused to sign off on the transaction to issue the bonds, asking all parties to find another way to pay for the renovation. She argues in a statement to reporters that the city can't take on more debt for non-essential services, especially when the city's credit rating has been downgraded twice in less than six months.

The suit names the city, the city Land Clearance for Redevelopment Authority, the Blues and Kiel Center Partners. St. Louis City Counselor Michael Garvin issued a statement this afternoon that points out the funding went through multiple approvals in the city before it was signed by then-Mayor Francis Slay. edeclined to comment on specifics of the suit, but said the city would "vigorously defend" its ordinances and agreements.

Spencer says the city doesn't have enough money for basic services, including policing or maintaining the thousands of vacant houses it truly owns and controls.

The suit is not an attempt to stop the renovation, Spencer says. She describes it as a way to "reset" the arrangement and consider other options. One solution is to create a regional sports authorities that could spread the costs for projects such as this, or the failed bid for a downtown soccer arena, more fairly across all the people that use them, she says.

"The city makes up one-tenth of the entire region, and we happen to be the poorest one tenth," Spencer says. "We cannot afford to subsidize the funding of these entertainment venues alone."

Editor's note: A previously version of this story wrongly attributed a statement to Mayor Lyda Krewson that actually came from City Counselor Michael Garvin. It was Garvin who vowed to "vigorously defend" the deal. We regret the error.