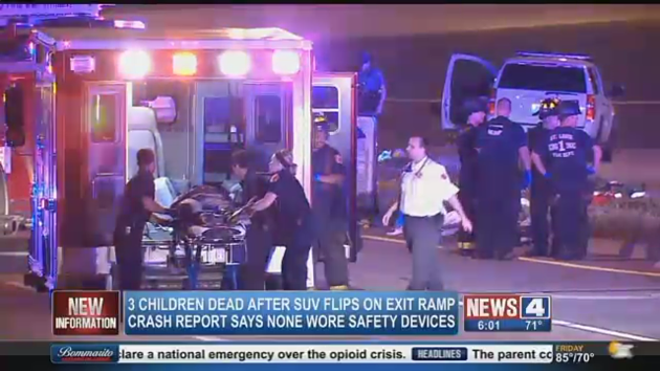 Three children, ages three to eleven, were killed and two other people seriously injured when an SUV lost control on an I-70 exit ramp north of downtown St. Louis last night.

KMOV reports that the vehicle overturned on the I-70 exit ramp at Tucker and Cass around 9:20 p.m. A witness, Joel Brown, tells KMOV that the vehicle lost control after taking a corner. "Next thing I know the car was flipping and kids are hollering and everyone is hollering," he says.

According to the Missouri State Highway Patrol, there were five child passengers and one adult driver in the vehicle at the time of the crash. The Post-Dispatch reports that five of the occupants were ejected from the vehicle.

"It was scary to see them kids. The way they ejected from that car was scary. The three-year-old was ejected," Brown says. "Then you look up and it's flipping and all of a sudden there is smoke everywhere."

Three-year-old Eric Williams and ten-year-old Lamont Davis died at local hospitals as a result of their injuries. Eleven-year-old Danzel Cosey was found dead at the scene.

KMOV reports that the three-year-old was the driver's son and the other children who died were his stepsons. They were reportedly on their way home from football practice when the incident occurred.

According to the Missouri State Highway Patrol, none of the children in the vehicle were wearing safety restraints at the time of the accident.