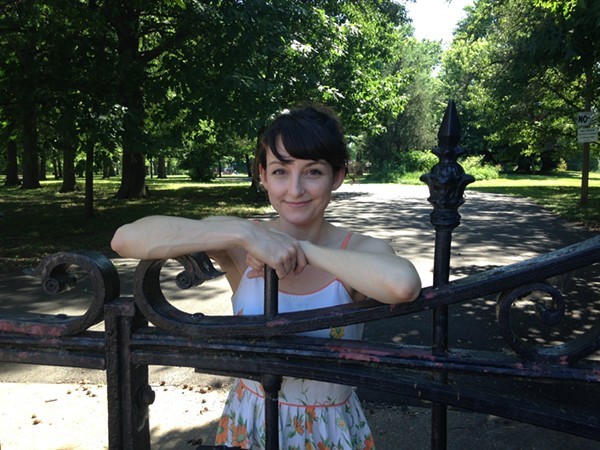 Strange Folk Festival will take place the weekend of September 22 in Lafayette Square Park – or at least that’s what the paying vendors have been told.

But though all the promotional materials and vendor applications claimed up until today that the event will occur at the city park, organizer Autumn Wiggins has yet to secure the actual permits and requirements. Those who represent the neighborhood don’t anticipate her acquiring them any time soon.

After receiving inquiries from Riverfront Times, Wiggins updated the event's website to remove the park location. With just a month before the event, Wiggins confirms she's pivoting to a new location. She says she's optimistic about a place that she is not ready to announce just yet.

“The streets aren’t good for us,” Wiggins says. “We like to do a lot of atmospheric installations and we like shaded walking paths. We’re just trying to create this really chill atmosphere in a park.”

Wiggins spoke with the city officials and the parks department last October and inquired about the availability of the space for her event this fall. After she talked to the officials, she took their conversations to mean that the park had been properly reserved.

“There’s no timeline to get this and this and this by this date,” Wiggins says. “When we reserved the park with the city there were no instructions to say now get your support letters. We thought we did everything we needed.”

Though Wiggins chalks this up to a “miscommunication,” officials have been in contact with her about the requirements since May, says David Merideth, president of the Lafayette Square Restoration Committee.

And it doesn’t look like Wiggins will be able to meet these requirements any time soon. Alderman Jack Coatar, who represents one-half of Lafayette Square, says it’s simply not possible for an event of Strange Folk’s size to occur in the park. Because it’s entirely maintained by volunteers from the Lafayette Park Conservancy, the park is “not equipped to handle a 30,000-person event,” Coatar says.

Keefe says all the local neighborhood booths were “segregated” off to a side street, and thereby didn’t receive much business last year. (Wiggins defends the set-up, saying that “it made sense to put them where they were.”) Keefe also says that Wiggins had promised not to have duplicate businesses of the neighborhood ones, but failed to make good on that promise. Keefe, for one, found herself competing against another ice cream vendor.

In addition, Wiggins backpedalled on the $5,000 donation. She tells RFT that there was “no paperwork” and that after the event she “never heard anything about it” from the Lafayette Square Restoration Committee. (In recent weeks, following pressure from Coatar, Wiggins has donated the $5,000 to the neighborhood committee.)

Wiggins has since changed the website to say "location TBA."

“As of right now we want to be open about what’s going on: we are definitely having Strange Folk, all of our bands are lined up — the festival is basically ready just to drop in somewhere,” Wiggins says. “We want to let people know where it is as soon as we get the green light.”

Wiggins has looked into Kiener Plaza downtown as a possible venue. Though Alderman Coatar agreed it would be a “great location,” he suggested the necessary street closures may be a problem, especially on the same weekend as a Cardinal’s game.

Coatar has offered to let Wiggins host the event in Lafayette Square on the streets, as it was last year, as long as she would promise to intersperse the booths for local businesses and cooperate with a few restrictions.

“Lafayette Square is very interested in having the event again,” Coatar says. “We thought it was a great event and it was well-attended, but I guess the organizer didn’t want to go that route.”

Wiggins says she believes that the new locations she's considering have advantages over Lafayette Park.

“We are not going to compromise on what our needs are for logistics,” Wiggins says. “Strange Folk has happened in all kinds of places. I know we have other localities and I want to have it where I want to have it, because I think I know what’s best for the vendors.”

Nevertheless, Keefe questions why it's taken Wiggins this long to acknowledge the fact. Emails from the city to Wiggins in June made clear the park was a no-go.

“She’s misleading all of these vendors and collecting money when they think it’s going to be in one place in a certain kind of environment and it’s not,” Keefe says. “She’s using the reputation of the neighborhood to lure people in and spend money.”

However, Wiggins insists that her vendors are her top priority. She didn’t want to “panic” vendors before she had a location locked down.

“We decided to let everybody have their summer not to worry about it,” Wiggins says. “We’re letting our vendors know right now what’s going on. We don’t anticipate that they are going to have any problems with this location at all. Our vendors are super dedicated and they know it’s going to be great no matter where it is.”

As for the new location, Wiggins hopes to announce in the next few weeks. She’s in the process of getting these permits and “everybody’s at the table now.” Though the location change caused some frenzy, she’s actually excited about the new home.

“Every single place that I envision Strange Folk in has a completely different feel to it,” Wiggins says. “On one hand we were bummed out, but on the other hand it was totally serendipity.”