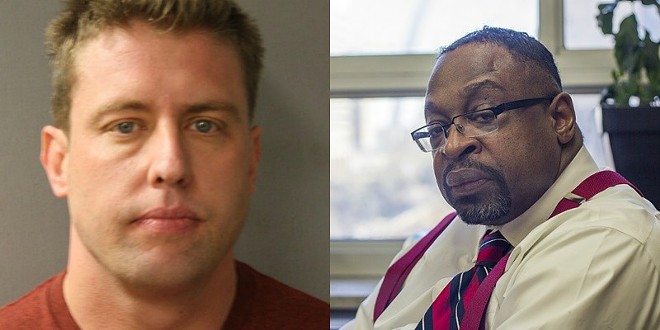 At the start of Tuesday's proceedings in the murder trial of former St. Louis police officer Jason Stockley, the prosecution formally rested its case; the state had called eighteen witnesses and introduced dozens of pieces of evidence. And when yesterday's hearing concluded, the defense rested its case as well.

Stockley's defense attorneys called only two witnesses: The first, a shop worker, testified that he had partially observed — at a distance — the moment Stockley fired five times into a silver Buick, fatally injuring Anthony Lamar Smith, who had led police on a high speed chase through north St. Louis on December 20, 2011.

The second witness was Jason Stockley himself.


Over the course of four hours of testimony, the ex-cop maintained that shooting Smith was a necessary action in response to an "imminent threat" — and not, as prosecutors allege, the culmination of Stockley's plan to murder Smith and frame him after the fact.

But by taking the stand, Stockley faced cross-examination from prosecutor Robert Steele, a longtime former defense attorney who attempted to push the former cop into logical and rhetorical corners. At several moments, Steele bluntly asserted that Stockley had planted a silver revolver inside Smith's car and had lied to investigators to explain his strange behavior at the scene of the shooting.

Stockley, making his first-ever public comments about the shooting, had a different story to tell.

Had Stockley's defense attorneys gotten their way, their client never would have taken the stand. Their first act on Tuesday was to ask St. Louis Circuit Judge Timothy Wilson to issue an immediate, directed verdict on the case.

Stockley had previously waived his right to a jury trial, leaving the final determination of guilt or innocence solely to Judge Wilson. But the judge wasn't ready to decide Stockley's fate just yet; he denied the defense's motion. And so for their first witness, the defense called Stockley to the stand.

Stockley, now 36 years old, had joined the St. Louis Metropolitan Police Department in 2007, one year after being honorably discharged from the military due to an injury he'd sustained in Iraq. When he graduated the police academy, Stockley said, he won awards for academics and defensive tactics, and was named the best overall officer of his class.

Prompted by questions from defense attorney Neil Bruntrager, Stockley testified that he had been on regular patrol in Walnut Park with his partner Brian Bianchi on December 20, 2011, when they passed a Church's Chicken near Thekla Avenue and Riverview Boulevard. Two men near the restaurant appeared to be making a "hand to hand transaction" — police jargon for a drug deal. Smith was one of the suspects.

In court, Bruntrager played surveillance footage from the Church's parking lot. It showed the police SUV, driven by Bianchi, attempting to block Smith's silver Buick in its parking space. Smith, in response, backed the Buick into the police vehicle and made a series of halting turns to escape the parking lot. The surveillance footage also shows Stockley chasing after the Buick while wielding his personal AK-47 Draco, a pistol version of the assault rifle that fires the same military-grade rounds.

Stockley admitted that he'd been warned by a supervisor about bringing the weapon into the field, but he carried it anyway. December 20 was not the first time he'd broken that particular policy. On the stand, he explained that shells from high-powered ammunition had been uncovered at recent homicide scenes, and he was worried about facing a heavily armed suspect who was utilizing ammunition that could pierce police vests.

The Draco, Stockley said, evened the playing field. He'd chosen to break departmental rules "because I valued the lives and safety of my fellow officers more than policy."

But Stockley never fired the Draco. As the Buick made its turns, Stockley claimed that Bianchi called out "gun!" as a warning. Stockley was positioned by the passenger-side of the Buick, an angle that he claimed provided a clear view of Smith's right hand on the passenger seat clasping a weapon.

"I knew I'd just seen the barrel of a gun," Stockley testified.

Smith accelerated the Buick out of the parking lot, nearly striking Stockley, who had leapt from the police SUV carrying the Draco. However, as the Buick made its escape, Stockley shifted the bulky weapon to his left hand and drew his department-issued Beretta. He fired seven times at the fleeing Smith. (Only 9mm shell casings from the Beretta were recovered at the Church's Chicken. The AK-47 fires 7.62mm rounds.)

Why didn't Stockley use the Draco? He said he was concerned that the powerful rounds would penetrate walls and strike bystanders, and the lighter Beretta was easier to aim and handle on the run.

Stockley and Bianchi gave chase, speeding after the Buick for the three miles. However, in the middle of the pursuit, the police SUV's interior dashboard camera picked up Stockley uttering a phrase that prosecutors now point to as the moment the officer declared his intent to murder Smith. The phrase, though garbled with radio static, was something along the lines of, "I’m going to kill this this motherfucker, don’t you know it."

Although Stockley's attorneys had previously argued that the audio recording contained no such statement, Stockley conceded Tuesday that he could, in fact, hear the words, particularly after having listened to the dash cam audio more than 100 times himself.

However, Stockley claimed that while he didn't deny the prosecutors' interpretation of the audio, he had "no recollection" of saying he was going to kill Smith, and he insisted that he had not actually made any decision to kill the fleeing suspect.

To the prosecution, though, Stockley's explanation was just another lie from a murderer. 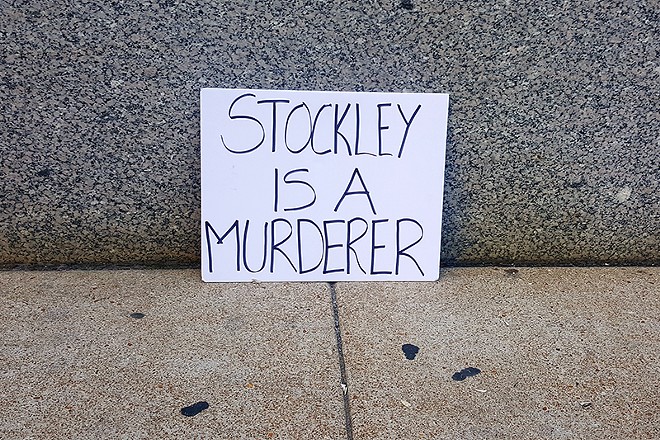 Prosecutor Robert Steele began his cross-examination with a winding preamble about Stockley's understanding of the general concept of rules and the consequences for breaking them.

"You did what you wanted to do," said Steele, hammering Stockley for violating police policies by carrying the Draco.

Stockley responded, "I did what I had to do."

Steele replayed the surveillance footage from the Church's parking lot, noting that Bianchi had drawn his weapon during Smith's escape, only to re-holster it moments later. If Bianchi had also spotted Smith's gun, as Stockley claimed, shouldn't Bianchi have kept his gun aimed at the armed and dangerous suspect?

"We’re supposed to believe you, that he saw a gun and put his own gun back in the holster?" noted Steele, adding a mocking jab: "Because he didn't like living, I guess."

Steele's question elicited a forceful objection from Stockley's defense attorney.
Neil Bruntrager and Steele had clashed repeatedly last week, but Tuesday's cross examination brought both attorneys to the point of shouting objections and counter-objections over each other.

"This is my cross examination!" Steele roared after one of Bruntrager's numerous objections, most of which were directed at the prosecutor's tendency to talk over Stockley's answers.

When Steele wasn't bristling at Bruntrager's objections, he applied relentless pressure to Stockley's story. Under questioning, Stockley admitted that although he did not remember saying that he was going to kill Smith, the prosecution's claims about dash cam audio were essentially accurate.

"I heard it," Stockley said. "It sounds like me, I believe you can see my lips moving." He stressed that he had no memory of saying it, and that he didn't mean "kill that motherfucker" in a literal sense. Steele wasn't buying it.

"So you did exactly what you said you were going to do," said the prosecutor.

After the incident at the Church's parking lot, the chase ended minutes later when Bianchi rammed the police SUV into Smith's Buick. The police dash camera captured footage of Stockley approaching the vehicle, and fifteen seconds later he fired five times into the driver's side window, fatally wounding Smith.

During his earlier testimony, Stockley claimed that during those seconds prior to opening fire, he had watched Smith frantically moving his right arm around the passenger seat. It was Smith's change in demeanor, Stockley said, that signaled the suspect had found the gun he was looking for.

After the shooting, however, Stockley's behavior raised questions. He returned to the police SUV multiple times, first depositing the Draco in the back seat, and then returning to retrieve something from his duty bag. It was at that point, Steele contends, that Stockley retrieved the .38 revolver that he planned to plant in Smith's car.

That argument also seems to implicate the other officers on the scene. Steele pressed Stockley on the fact that he told just one responding officer to "watch [Smith's] hands," and otherwise the still-breathing Smith was left to sit in the Buick as officers milled around the car, seemingly unconcerned about the armed suspect. Stockley was then permitted to enter the Buick to search for evidence himself.

"If there’s a suspect with a gun in the car, the gun is supposed to be recovered immediately," Steele argued. Stockley responded that by that point, Smith was "compliant" and sitting with his palms up, meaning there was no need to immediately remove the dying 24-year-old suspect.

Stockley also claimed that he'd been forced to remove his gloves because their thickness made it difficult to discern what he was touching during the search. After he entered the Buick, Stockley touched and unloaded the .38 revolver with his bare hands.

Forensic testing eventually detected Stockley's DNA on the revolver and on a small baggie of drugs located in the car. Smith's DNA, however, only showed up on the baggie. (Last week, DNA analysts testified that the absence of DNA on the gun did not prove that it wasn't Smith's.)

Steele pounced on this apparent discrepancy all the same. Why, he queried, would Smith's DNA not be found on the revolver? Hadn't Stockley himself supposedly seen Smith handling it multiple times?

He brought up Stockley's strange decision to remove his gloves before collecting sensitive crime scene evidence.

"The only way to account for the .38 was to take your gloves off," Steele said.

Stockley wouldn't budge. "I wasn't trying to account for anything," he fired back. "The first time I touched that gun was in that vehicle."

The trial concludes today with closing arguments. It's not yet clear when Judge Wilson will be ready to deliver a verdict.