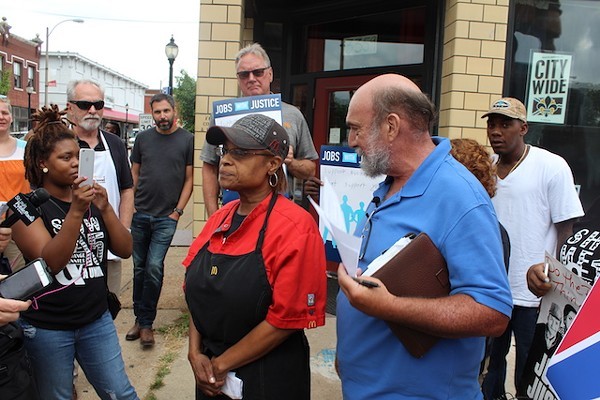 So what if the state legislature struck down the city's minimum wage increase? A new effort aims to take those elected officials right out of the equation.

A group called Raise Up Missouri announced this morning that it would be gathering signatures to put a new ballot initiative before voters in November 2018. If the effort is successful, it won't just restore the $10 minimum wage approved by St. Louis' Board of Aldermen — it would significantly up the ante, with a $12 minimum wage across the entire state.

Now, before you start counting your extra money, a few caveats worth noting:

Beyond that, of course, the entire initiative is dependent on the group collecting enough signatures to withstand any challengers (which is never as easy as it sounds — just ask medical marijuana advocates) and then persuading voters to say yes. They'll have to get more than 100,000 signatures from a broad swath of the state, earning a certain threshold of signatures from six of Missouri's eight congressional districts.

“Governor Greitens said he’ll raise wages, but he’s doing the opposite,” SEIU Local 1 Janitor Richard Franklin said in a prepared statement. “We’re going to take the power away from the politicians, put it back in the hands of the people, and raise Missouri’s minimum wage for working people. Because every working family should be able to pay the bills and put food on the table.”

Visit Raise Up Missouri's website to volunteer for the campaign.