The City Says It's Cracking Down on Tax Incentives. It's Not 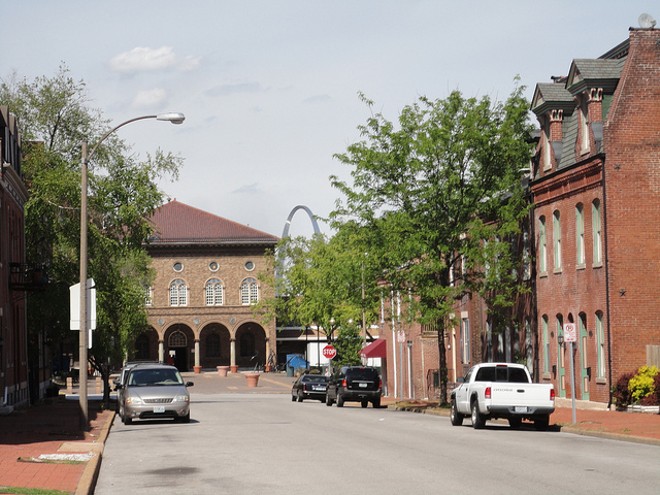 While city elected officials and the St. Louis Development Corporation (SLDC) have spent significant time touting their new “guidelines” for the use of tax incentives, it is already becoming apparent that they have little to no intention of following either the letter or spirit of the “reforms” they themselves have put forward.

Resolution 33, which has been proposed by Alderman Joe Roddy, chair of the city's Housing, Urban Development and Zoning Committee, claims to limit total tax abatement to 75 percent for a term of five years if the development is located in an area that is designated as having a healthy real estate market in the city’s 2014 Market Value Analysis. But at July 25's Land Clearance and Reutilization Authority (LCRA) board meeting, both SLDC staff and the appointed members of the LCRA board unabashedly showed how meaningless non-binding reforms like Resolution 33 are in a system that is intensely corrupted.

In an hour of stunning hypocrisy, the appointed board members (many of whom also serve on the SLDC) repeatedly noted that the proposals in front of them were the first to be considered under “the new system.” The board’s supposed frugality inspired board member Chris Goodson to state “it’s working” numerous times. It should be noted that Goodson is himself a developer. It should also be noted that the actual proceedings paint a picture of anything but frugality. While abatements were approved for numerous projects in higher-need areas of town, the board showed little willingness to heed the new guidelines by also voting “no” on bloated incentives in wealthier areas.

Yet when the Russell building came back for a higher abatement than originally approved by SLDC staff, there was little serious discussion of why the building needed the increased subsidy. That's even though, under the guidelines SLDC says they are now employing, this project’s 10-year, 80 percent abatement was already twice what the public has been told would be granted on projects in this particular part of the city. LCRA approved the new 10 year, 90 percent abatement recommendation.

The other Soulard development was a condo project on 12th Street. Whatever changes in figures submitted by the developer must have been substantial, as the value of the proposed abatement more than doubled, from 75 percent abatement for five years to 90 percent for ten years. The original recommendation from SLDC staff had been in line with Resolution 33’s guidelines. But even the new substantial increase on the agenda apparently wasn’t generous enough for the LCRA board members. Here the board even increased the abatement to 95 percent over ten years, stating that the extra five percent above the SLDC staff's new recommendation was because they were grateful it was condos instead of rental. The increase was apparently justified by the simple fact that the developer had originally asked for 100 percent abatement.

In short, the board members ignored staff recommendations and increased the value of the abatement above the level that SLDC deemed necessary for the project to be profitable — and that's after the SLDC already more than doubled the value of their abatement recommendation. When appointed board members continue to capriciously increase giveaways to developers, taxpayers have every right to question the city's sincerity about reforms.

The bleeding of the tax base was not limited to Soulard and Alderman Jack Coatar: In Alderman Stephen Conway's 8th ward Shaw neighborhood, an abatement was approved for a large, single-family home owned by a member of a well-known St. Louis family. This home was not bought or sold, but simply renovated. This large house is on the exclusive Flora Place, where homeowners even pay a special fee to support private security. Despite having the means to pay for home renovations, we are told that the owner cannot afford to pay the increasing tax assessments in Shaw. There was no proof offered of hardship, only a note that the owner is a senior. This particular request is ironic considering Conway's unabashed pride in rising property values and lack of concern for lower income families' ability to pay higher taxes just a couple of months ago. Apparently some of his residents' ability to pay their taxes now matters, and he has had a change of heart. Well, at least in this particular case.

Even more brazenly, on the Hill, Alderman Joseph Vollmer requested another ten-year abatement for the construction of a large home on a street where even the LCRA board believes abatements to be entirely unnecessary. Board members complained that Vollmer had submitted another request for a home that obviously shouldn't be abated. In this case SLDC staff had recommended zero abatement. The LCRA board members all publicly agreed with SLDC staff and that the home should not receive abatement. And yet, instead of simply denying the “blight” designation that enables the eventual abatement, the LCRA board went right ahead and granted it.

The board members could have stopped the process at that point, but the good ol' boy system requires that decorum be maintained. The “blight” designation was granted, though with a recommendation for no abatement. Still, that designation will enable Vollmer to do just what the board members have predicted: introduce a bill at the Board of Alderman to again request a ten-year abatement on a home they recommended not receive abatement. In fact, he recently introduced a similar ordinance, right before the Board of Aldermen went on summer break. Both deals are on the same street, only a block apart. It is unfortunately likely that “aldermanic courtesy” will do the rest of the work, and both unnecessary abatements will almost assuredly sail through committee hearings and to passage in the fall. After all, alders who oppose even blatantly terrible deals run the risk of raising the ire of traditionalist committee chairs, who are quite open about their willingness to punish their peers who occasionally challenge the system.

The fact is, nobody is watching out for the average working-class taxpayers. Instead, we have an atrophied system of elites that has created a process that even the actors themselves openly acknowledge is broken. This is why we need new, binding restrictions on the use of abatements, TIFs and other development incentives, not just resolutions like the one proposed by Alderman Roddy.

It is also why we need recordings of these hearings to be made public, like meetings of the Board of Aldermen and their committees. This simple transparency measure has been repeatedly suggested by taxpayer advocates. The public has a right to know that this is going on, and meetings in the middle of the afternoon make it very difficult for most people to attend.

Almost as important as the deals themselves, it should be noted that all of this happened in front of at least one reporter. Yet the alarming details described above have yet to make it into any media coverage. Why? Because it happens all of the time and, therefore, it isn't considered news. But it should be. The lack of concern for the general public and taxpayers' interests is staggering. Resolution 33 and tweaks by SLDC can't change a system that is so compromised by toxic political culture and decades of bad habits.

The city is broke. Our bond rating continues to sink. We can no longer afford this fealty to tradition. We need legally binding ordinances that ensure a minimum level of accountability to our city's taxpayers. Such systemic change is still not being seriously discussed by our elected officials, including Mayor Krewson, even though she has listed incentive reform as among her top priorities. Contrary to one LCRA board member’s belief that “it’s working,” a sober assessment of the current system leads one to the conclusion that it is so intrinsically flawed that the only viable pathway to meaningful reform is the passage of binding ordinances limiting the usage of incentives. The actions of the LCRA board members themselves stand as Exhibit A that the proposed guidelines aren’t strong enough.

To add a touch of unintentional candor, at one point in the meeting SLDC Executive Director Otis Williams referred to saving some property tax revenue for schools and other budget areas as SLDC's “newfound philosophy.” The agency has always been charged with being the taxpayer's watchdog, but its leader's own words lay bare the fact that it has long shirked its fiduciary duty.

Glenn Burleigh is a longtime progressive activist who lives in south city's Marine Villa neighborhood and volunteers with Team TIF. The RFT welcomes concise, well-reasoned essays on topics of local interest. Contact sarah.fenske@riverfronttimes.com if you've got something to say.