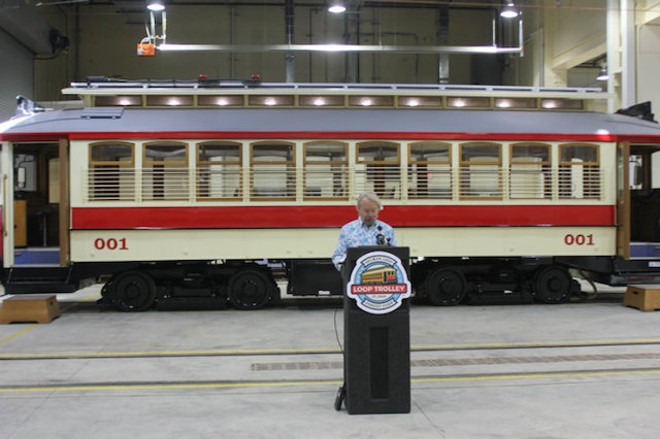 If the Loop trolley doesn't get more money from St. Louis County taxpayers, the entire region's federal transit funding could be in jeopardy.

That's the doomsday scenario being claimed in a report from the St. Louis Business Journal this morning. The weekly newspaper reports that Joe Edwards, the man behind the $51 million project, has been asking members of the St. Louis County Council for $500,000, saying the funds are necessary to complete the project.

The old-timey trolley — which would ferry tourists from the Delmar Loop to the Missouri History Museum using anachronistic tracks and overhead lines — has seen costs balloon to $51 million from the original $43 million budget. And while late 2016 was originally given as the start date for cars to begin operation, delays have pushed that back again and again. To date, only a small portion of the tracks have been tested by actual trolley cars. And each car needs to log 300 miles of test runs before the real deal can begin.

When the RFT questioned the Loop Trolley Company about the state of the project last month, Executive Director Kevin Barbeau would say only that "an unexpected delay in receiving critical parts for the refurbishment of the third trolley vehicle (a 1920s model built in Melbourne, Australia)" had pushed things back. Barbeau told the Business Journal that it's a "custom-made part" and should be arriving by mid-September.

But that six-month delay to the schedule outlined in March could have serious consequences. The trolley is on pace to lose more than $500,000 this year, the Business Journal reports — a deficit that evaporates (at least on paper) once it can begin charging people $2 per ride.

And the feds, who have kicked in an estimated $34 million for the project, are eager to make sure they don't lose their investment.

The most chilling part of the Business Journal report was this potential threat:


Edwards also said he has been told by Federal Transit Administration Regional Administrator Mokhtee Ahmad that if the trolley is not completed in the immediate future and does not operate successfully for the first three years, future federal funds for other St. Louis-area projects could go to other cities, the person said.

Ahmad said in an interview that the trolley needs additional funds for operations.

"If you look at the budget, I think they all realize that they need additional monies," Ahmad said. "We've come a long way with the capital and infrastructure, now we want to operate it."

Note that Ahmad is not pushing back on Edwards' claim about the entire region's success being tied to the trolley's completion/successful operation. Gulp.

St. Louis County has already kicked in $3 million for the project. The bulk of the remainder comes from a sales tax surcharge, voluntarily agreed upon by businesses in the trolley district. Edwards, who owns Blueberry Hill, the Pageant, Delmar Hall and many other successful concerns along Delmar, is a primary stakeholder among those businesses.