William Harney Murdered a Slave. Why Is There a St. Louis Street Named for Him? 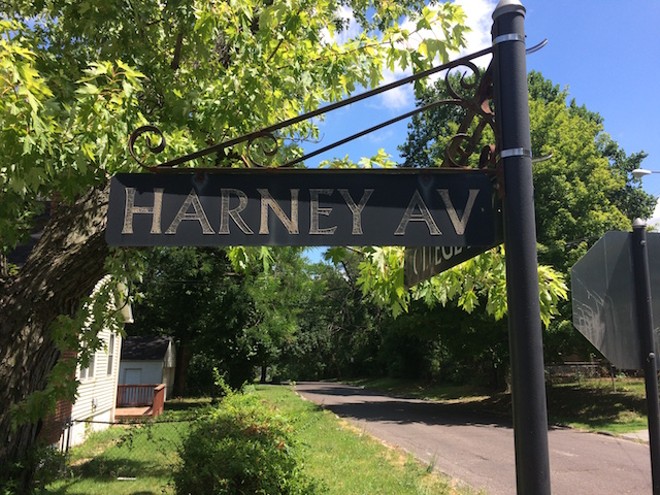 On a June day in 1834, Major William S. Harney was looking for keys — and somehow became convinced that a woman he kept as a slave, Hannah, had hidden them. Three days later, Hannah died of injuries she sustained after being brutally beaten. According to Harriet Frazier’s 2001 book Slavery and Crime in Missouri, 1773-1865, the retired military officer, then based in St. Louis, believed that torturing Hannah might yield their location.

Today you will find the name Harney on street maps of St. Louis. You can trace it as a diagonal line running northwest from its intersection with Euclid Avenue just outside of Bellefontaine Cemetery up to its intersection with Acme Avenue in Walnut Park West. There it cuts off and then resurfaces just outside city limits, between Wilborn Drive and Jennings Station Road. It is, in fact, named after Harney, who was promoted to major general by Abraham Lincoln himself upon his retirement in 1863.

The city recently pushed for the Confederate Monument in Forest Park to be taken down, and some attention has now turned to street names like, yes, Confederate Drive, which is also in Forest Park. But Harney Avenue remains.

Harney did, in fact, enjoy an illustrious military career. In the Mexican-American War he served in at least five battles as a cavalry commander. He held various posts in the years leading up to the Civil War. He was sent to quell tensions on the Missouri-Kansas border, and after Fort Sumter he negotiated a brief truce between the federal forces and Sterling Price’s Missouri Guard. He was conspicuously replaced by Nathaniel Lyon; it was thought that his Kentucky roots would lead him to become an agent for secession.

In fact, after being recalled to Washington at the outset of the Civil War, Harney was briefly kidnapped by Southern forces and promptly offered a field command by Robert E. Lee. Harney declined and his captors let him go in peace. He served the rest of his military career a glorified paper pusher in the nation’s capitol, and in death he was remembered as a valiant, loyal soldier. Harney died in 1889, and his remains are interred at Arlington National Cemetery near a stout gray headstone.

Hannah’s legacy is much more spartan. For starters, the only recorded name we have for her is Hannah. Perhaps sensing the inconsequential feeling of that name all by itself, some historical records refer to her as “Hannah, a slave.” A letter dating from the days following Hannah’s death from a St. Louis resident to the prominent abolitionist Arthur Tappan stated that Hannah had a husband and many children. According to the letter she was previously kept by John Shackford Esq. and “was considered an excellent servant.”

Otherwise, there is the coroner’s report. According to Harriet Frazier, the testimony of witnesses and physicians was heard before it was officially concluded Hannah “came to her death by wounds inflicted by William S. Harney.” The Tappan letter contains more gruesome details, perhaps gleaned from eyewitness accounts.

The letter’s author, a St. Louis resident named Nathan Cole, writes: “Major Harney, an officer of our army, had whipped her for three successive days, and it is supposed by some, that she was kept tied during that time, until her flesh was so lacerated and torn that it was impossible for the jury to say whether it had been done with a whip or hot iron; some think both—but she was tortured to death.”

The incident was reported on by the Missouri Republican, the Missouri Intelligencer and the Cincinnati Journal in the days that followed. An angry mob assembled and, according to the Journal, they “formed the resolution to take him into the bushes, and leave him in precisely the same fix as he left the woman.” But Harney had already skipped town by then. It’s believed he fled up the Ohio River by steamboat where he sought asylum, first in Wheeling, Virginia, then in Baltimore, then in Washington.

In 1835, assured by friends and relatives that the incident had blown over, Harney returned to St. Louis and faced his indictment headlong. He requested a change of venue, which was granted. The trial was to be held in Union, 50 miles west of St. Louis. Eventually the case was heard under Judge Charles “Horse” Allen, a Democrat known to enjoy a good street fight, and who traveled around with sidearms on his hip. Harney was unceremoniously acquitted by a jury of his peers two days later.

Given his rank and the many line items on his combat resume, it is perhaps unsurprising that Harney’s name appears on maps from coast to coast. Harney County Oregon, the state’s largest county at 10,228 square miles, is named for him. As is Lake Harney, Florida, and Harney Street in Omaha. Harney’s marriage into St. Louis’s prestigious Mullanphy family all but assured his position in the annals of the city’s history, and Streets of St. Louis: A History of St. Louis Street Names by William B. and Marcella C. Magnan confirms that Harney Ave is named for the general.

Changing the name of Harney Ave. would be no small feat. An official city document lays out the process. First, a petition containing the signatures of 51 percent of the people who own land fronting on the street must be filed with the Community Development Agency — or 68 property owners in this case.

From there, the Community Development Agency may approve or deny the petition. After public hearings, the Board of Aldermen could put it to a vote.

In 2015 North 3rd Street, a half-mile long thoroughfare between O’Fallon Street and Washington Avenue was successfully renamed Lumiere Place Boulevard. This change basically amounted to a unilateral maneuver by Tropicana Entertainment, operator of the Lumiere Place Casino, which happened to own more than 50 percent of the property on 3rd Street.

Mayor Lyda Krewson was instrumental in the effort to get the Confederate Monument removed from Forest Park. She seemed open to change for Harney Avenue.

“In general this is very similar to the Confederate Monument,” says Krewson’s spokesman Koran Addo. “We don’t want to honor certain events or certain people.” When asked if Mayor Krewson would support an effort to get the street renamed, Addo hedges. “She would not fight it.”