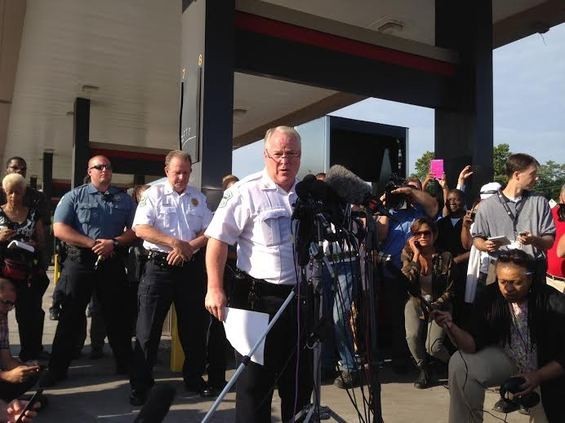 A Navy veteran and former cybersecurity contractor with the National Geospatial-Intelligence Agency has filed a lawsuit against the city of Ferguson, saying its malicious prosecution led to a state of limbo that ultimately cost him his job.

Fred Watson alleges in his suit that he was approached by Ferguson Police after a game of pickup basketball in Forestwood Park. He was sitting in his own car cooling down when an officer began shouting at him, "Put your hands on the steering wheel! Do you know why I'm stopping you? Do you know why I pulled you over?" The bizarre confrontation only escalated from there — with Officer Eddie Boyd III allegedly brandishing his gun before cuffing Watson, having his car towed and slapping him with no less than seven tickets.

Those ordinance violations remain pending in court today, records show — even though Watson's attorneys produced his license, insurance and vehicle registration and fought the other charges as well. The case was even cited in the U.S. Department of Justice's 2015 "Investigation of the Ferguson Police Department."

The suit suggests that Officer Boyd was upset because Watson declined to provide his social security number and then asked for the officer's badge number. And after the initial arrest led to charges that dragged on, and Ferguson found itself in the national spotlight, the municipality may have been scrambling to cover up its handling of the matter: The lawsuit alleges that Ferguson prosecutors "manipulated" the court record to cover up for their "mishandling and improper prosecution."

In fact, even though Watson never entered a guilty plea, at one point, the suit alleges, the city appropriated his bond payment as payment for the fines he was facing. Only after ArchCity asked for his file was Watson able to withdraw what Ferguson had apparently recorded as guilty pleas, despite no authorization from his attorneys.

The upshot? Five years after Watson's initial arrest — which took place on August 1, 2012 — the city is still pursuing the charges.

The lawsuit, which alleges unlawful seizure, unlawful retaliation, malicious prosecution and municipal liability, was filed yesterday by Blake Strode of ArchCity Defenders, the legal advocacy group. It names as defendants both the city of Ferguson and Officer Boyd.

The long road to clearing up the Ferguson charges has had devastating repercussions for Watson, the suit alleges.

At the time of the suit, Watson had been a government cybersecurity contractor for ten years, with a top-secret security clearance. He'd worked for two years at the National Geospatial-Intelligence Agency, or NGA, the suit says.

Because Watson was in the process of a security clearance review at the time, he reported the charges to his supervisors. "He assured them that the charges were meritless and that he was seeking to get them resolved," the suit says.

But then the case dragged on. "As time passed with no resolution, he continued to face questions regarding the pending charges, and his security clearance remained under review," the suit alleges.

Ultimately, in August 2014, he was fired from the NGA since he could "no longer work without the security clearance," the suit says.

“The last five years have been pure hell," Watson said in a statement. "This situation not only has had me question my life, but my faith and my being. There have been no signs of justice. I haven’t seen anybody owning up to wrongdoing. The fight is still about protecting the City, not about providing justice to its citizens. In my opinion, there’s been no legal ramification for those responsible for this."

Watson, the suit says, has now been jobless for most of the past five years. He is "undertaking efforts to begin a new career." A statement from ArchCity alleges that he also lost his home as a result of fighting the charges.

Editor's note: This story was updated soon after publication to include a statement from Watson.